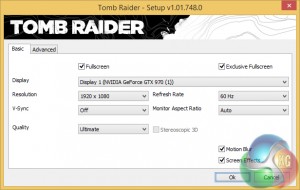 Punching pixels through the mighty GTX 970, gaming performance is where the Fusion Barbarian truly comes to life.

The GTX 970 simply breezes through our set of gaming benchmarks – registering 40-50% better performance than the contenders in Bioshock Infinite and Tomb Raider. Metro: Last Light frame rates were increased by 36% compared to the next fastest system configuration.

1920×1080 is no match for the GTX 970, especially when Gigabyte’s factory-overclock is taken into account. With Chillblast’s Fusion Barbarian sporting a GPU with this much power, the system looks to be perfectly capable of running titles at 1920×1080 with high – 120Hz and 144Hz – refresh rates, or an increased pixel count of 2560×1440.