Idle recordings are taken while the system sits at the desktop under minimum load. For the general usage test, we browse the internet while streaming 1080P videos on YouTube and running a background virus scan. Our gaming test uses Metro: Last Light – a DX11 title that taxes the CPU and GPU.

Chillblast applies speed profiles for the two CPU cooler fans and the front chassis fan. The CPU fan profiles were static throughout usage – we didn’t see the fan speeds adjust by much more than a few percent between the highest and lowest loads. 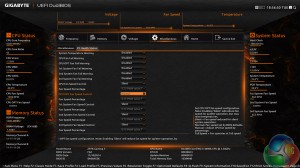 Ambient temperature was maintained at 21°C throughout testing. All fan settings were left on the Chillblast defaults shown in the UEFI screenshot above. 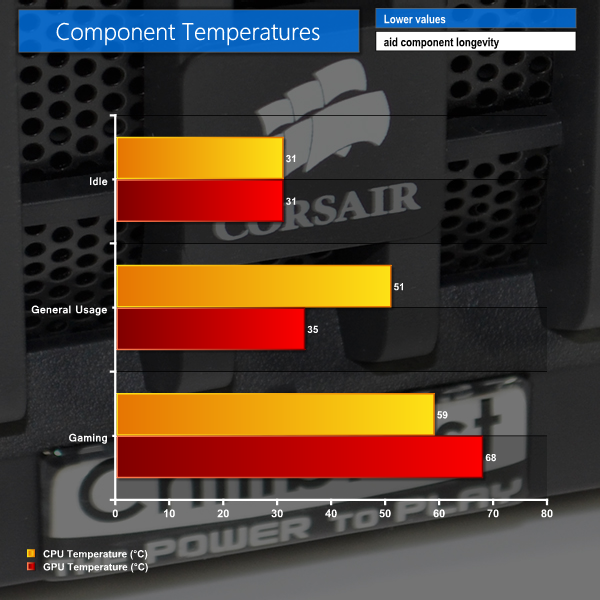 With the highest temperature level that we recorded being less than 70°C, there certainly aren’t any worries of components overheating. Seagate’s 2TB HDD sat around the 30°C mark, while the Samsung SSD peaked at 34°C while being subjected to the virus scan in our general usage workload.

Corsair’s H75 CPU cooler and the pair of 2000rpm, 120mm fans do an excellent job at cooling the 1.225V overclocked 4690K processor. Gigabyte’s excellent triple-fan Windforce cooler is equally worthy of credit, managing to maintain a load temperature of less than 70°C for the GTX 970 GPU.

With the case positioned on the floor, our sound level meter is placed where a user’s ears are likely to be located – around 50cm above the system and 100cm in front of it. 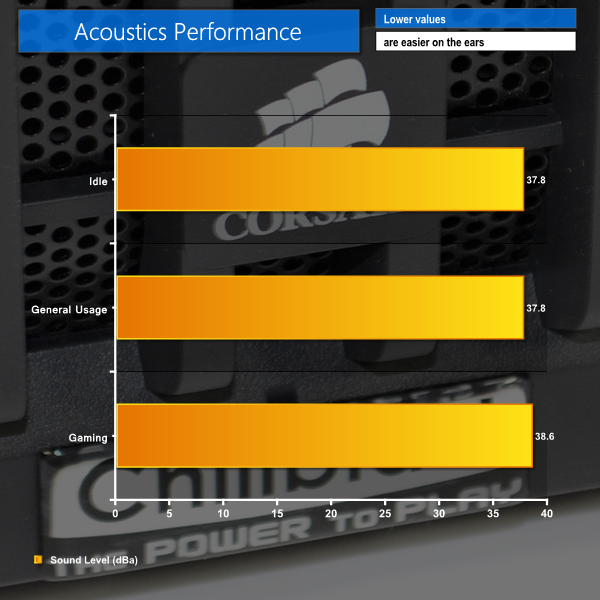 Despite Gigabyte’s triple-fan cooler not supporting a 0dB idle mode where the fans remain static, noise output of the system was far from intrusive.

The levels did not increase significantly, either, with only the GPU cooler’s fans ramping up under gaming load – the CPU cooler’s fans remained at a constant 1500rpm. And by ramping up, I mean increasing to a somewhat discernible maximum of just over 2000rpm.

I would not call the machine’s acoustic output unnoticeable – there was the constant low-pitched hum of fan and HDD vibrations being transmitted throughout the steel chassis. But the noise levels were far from annoying, even under a full gaming load. I would still prefer a load-based PWM profile for the CPU cooler’s fans, though; why not slow them down at idle if they can manage the heat?

Power consumption is measured at the wall, representing the energy drawn by the system. 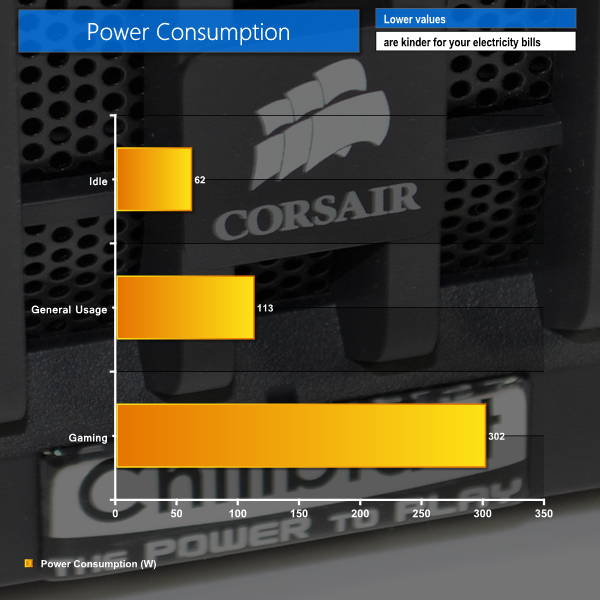 A full gaming load sees the system drawing just over 300W. Taking almost 3.5 hours to pull a kilowatt from the wall is worthy of compliment with the level of gaming performance on offer.

The numbers, especially those for our gaming test, show that Chillblast’s choice of PSU was justified. 300W load on a 750W unit puts it close to the level of maximum efficiency (about 30-35% of rated load, after efficiency conversions). And there’s still plenty of headroom for another GTX 970 while staying in the PSU’s most efficient load zone.