Since its soft-relaunch in late 2019, Sony’s game subscription service ‘PlayStation Now’ has offered its users a number of high quality titles each month. The console manufacturer has now revealed which games are set to join the line-up for the month of May. Tom Clancy’s Rainbow Six Siege, alongside The Evil Within 2 and Get Even are now available for subscribers to either stream or download.

Rainbow Six Siege needs no introduction. Released in 2015, Ubisoft has continued to support the tactical first person shooter regularly. In turn, fans have continued to support the game, with it now boasting over 55 million players. It would seem as though Siege’s forward trajectory has no intention of slowing down either, as Ubisoft has confirmed that the game will be supported on next-gen systems. It’s never too late to experience the “deeply tactical, always tense multiplayer shooter”. Rainbow Six Siege will be available on PlayStation Now until the 2nd of November 2020.

The Evil Within 2 is the sequel to Shinji Mikami’s terrifying survival horror third-person shooter. Released in late 2017, the game has you “enter the alternate reality town of Union in search of your long thought dead daughter”. Featuring “Sickeningly brilliant creature designs and jump scares,” the game received consistent and high praise from both critics and fans of Mikami’s work. The Evil Within 2 joins PlayStation Now as a permanent addition. 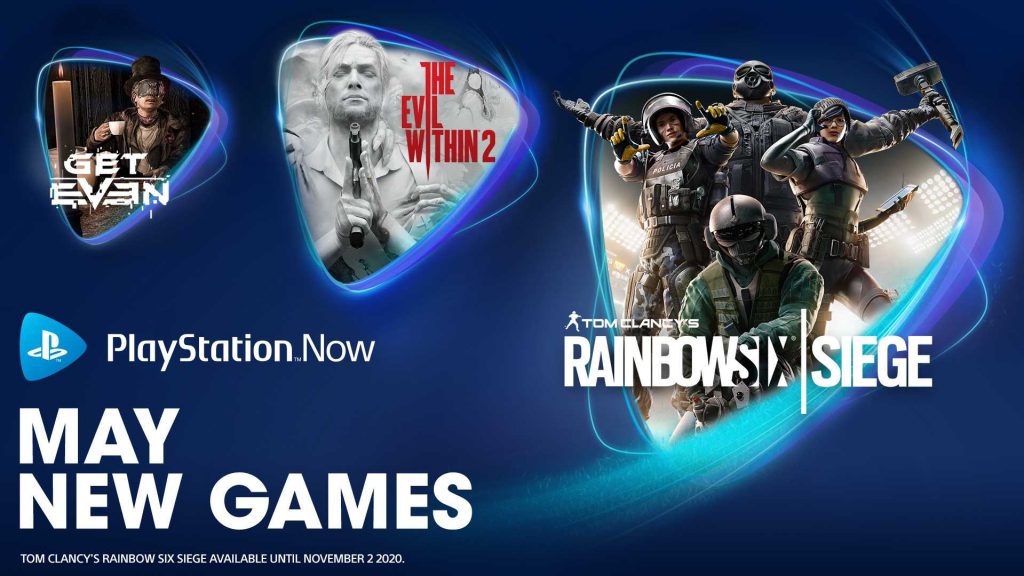 The third and final game joining the service for the month of May is Get Even – a puzzler, shooter, and psychological thriller. Published by Bandai Namco, you find “yourself trapped inside an insane asylum with a virtual reality device surgically grafted to your head”. You're then “forced to track down and ‘enter’ memories to gradually unravel the mystery behind your incarceration”. Featuring plenty of twists and turns, Get Even received a positive reception due in part to its deep and heavy atmosphere. As with The Evil Within 2, Get Even is a permanent addition to the service.

Rainbow Six Siege, The Evil Within 2 and Get Even are all available to stream or download on Sony’s PlayStation Now service. These games join over 800+ other titles, including Control, Marvel’s Spider-Man, and Shadow of the Tomb Raider.

KitGuru says: What do you think of this month’s offerings? Are you subscribed to any game services? Do you play Rainbow Six Siege? Let us know down below.