Google this week introduced a new tablet for software developers that belongs to its family of devices supporting the project Tango technologies. The mobile device has Nvidia Tegra K1 application processor inside as well as advanced sensing capabilities that help it to create a 3D model of the environment around it. The specs of the slate give a glimpse on requirements of the Tango technology.

The goal of Google’s project Tango is to give mobile devices a human-scale understanding of space and motion. While the side benefits of the project Tango are advancements in research of robotics and computer vision (something necessary for Google’s self-driving cars), the target applications of the project are mobile devices as well as, hypothetically, wearable computing devices. The Tango is expected to enable multitudes of useful applications for a broad range of needs.

The Project Tango devices feature special hardware (an RGB camera, a motion tracking camera, IR depth sensor(s), motion sensors [gyroscope, accelerometer, speed detection sensor, etc.] as well as special chips/algorithms to process such data efficiently) and software designed to track the full 3D motion of the device, while simultaneously creating a map of the environment. According to Google, the sensors allow the device to make over a quarter million 3D measurements every second, updating its position and orientation in real-time, combining that data into a single 3D model of the space around the device. 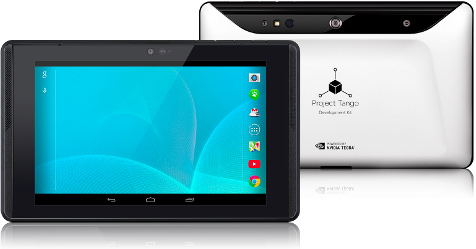 The project Tango tablet development kit is based on Nvidia's Tegra K1 processor and comes with a 7” display with 1920*1080 resolution, 4GB of LPDDR3 memory, 128GB of NAND flash storage, Wi-Fi, Bluetooth 4.0 LE as well as 4G/LTE connectivity. The development kit is designed for professional developers interested in exploring the future of mobile 3D sensing.

Nvidia hints that the project Tango tablet devkit utilizes GPGPU [general-purpose computing on GPUs] compute technologies to create 3D environmental models. At present the company’s Tegra K1 with 192 stream processors based on the Kepler architecture that supports OpenCL is among a few mobile SoCs with GPU-compute capabilities. Given that Google already encourages developers to use GPGPU technologies, it looks like the project Tango-based devices will require powerful graphics processing units.

The Project Tango tablet development kit goes on sale later this year for $1024.These development kits are not a consumer device and will be available in limited quantities (some believe that only 4000 units will be made). As usually, Google does not indicate when the project Tango evolves into a commercial product.

KitGuru Says: Google’s project Tango is a yet another promising technology from the company. While the project Tango definitely has a lot of potential, just like in case of the project Loon, the Google Contact Lens and other, it is completely unclear when it is set to become a product. Perhaps, the first devices featuring elements of the project Tango will emerge already next year. Or maybe in three years from now? No one knows that for sure.