We also tested the Asus RT-AC5300 where both 5GHz wireless networks were maxed out. With one Windows 10 computer connected to one of the bridges positioned 1m away, we set up a file transfer of large movies to the server’s hard disk, then ran WiFiPerf on a second computer connected in the same way using a bridge. 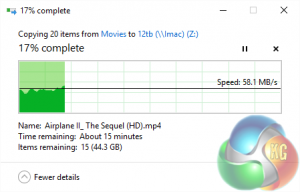 We ran WiFiPerf then initiated the file transfer some way into the test. 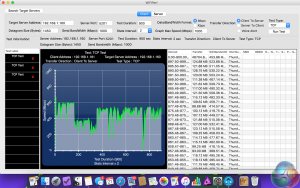 As you can see from the graph, with a network set up this way, wireless performance on the first 5GHz channel does indeed drop when a file transfer is in progress on the second 5GHz channel. It quickly leaps up again as soon as the transfer is paused.

Note, none of the figures in the above graph are reflective of the top possible performance. We were not bothered with the router positioning since we were not measuring speeds in this test, but just the difference multiple transfers over both networks would make to performance.

And as we can see from the graph, there is a big drop of almost 50 per cent when both networks are going at full speed.
In the graph, the long dip about a quarter of the way along is where the file transfer was initiated.

A bottleneck gets in the way of full performance, and the most likely culprit is the single gigabit ethernet port on the server, which is sending data to both clients at roughly 500 Mb/sec each. 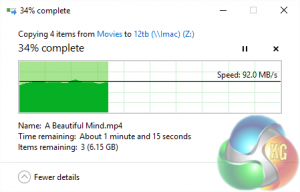 This time, with two separate computers transferring data between different servers, we see much better speeds from the file transfer, close to saturating the gigabit ethernet port alone. 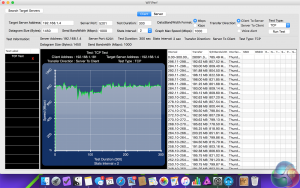 We began the file transfer 60 seconds in and paused it after 120 seconds. While you can still see a small drop in performance, this is only 50Mb/sec difference, rather than the 200-300 Mb/sec when using a single server.

We can conclude that the Asus RT-AC5300 is indeed capable of (roughly) full speed from both wireless networks simultaneously, even if the requirements to use all that bandwidth are rather complicated.

We also did a speed test on the USB ports, using a Samsung T1 USB SSD, to eliminate the possibility of disk transfer speeds slowing performance. 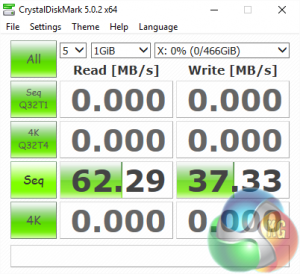 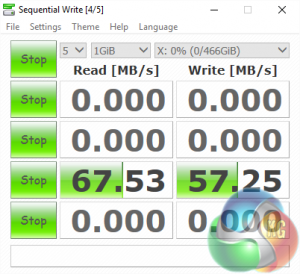 From the USB 3 port we measured 66 MB/sec read and 57 MB/sec write. Great speeds for a router’s USB port, which never usually run that fast, due to the low power processors.

Interestingly, there is little difference between the read speeds of either port, an indicator it is the processor that bottlenecks performance.

At idle, power consumption shows 13.8w, quite high for a router, but understandable, given the extra silicon inside.