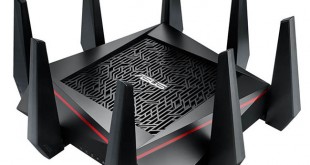 The Asus RT-AC5300 is a unique wireless router. Its slightly odd looking design is due to its eight antennas, providing three separate wireless networks – two of which are quad-stream 4×4 802.11ac. It’s of most benefit to environments with an extreme amount of wireless traffic, and for people who want the very fastest wireless speeds across multiple devices.

We’ve heard the Asus RT-AC5300 compared to an amusing range of different things. A dead bug, an upside-down processor removed from a motherboard and an artillery cannon from the game Supreme Commander are just a few.

Its easy to appreciate why just by looking at it. We can’t think of another consumer router with this many antennas, and although it isn’t the only router with a square design, it’s large dimensions and general appearance aren’t something you see every day.

The reason for this unique design is a corresponding unique set of features. It offers two 5GHz 802.11ac networks on separate circuits, allocating a full quota of bandwidth to each. Many routers already offer multiple SSIDs, providing users with two or more networks to connect to, each of which can be configured separately. 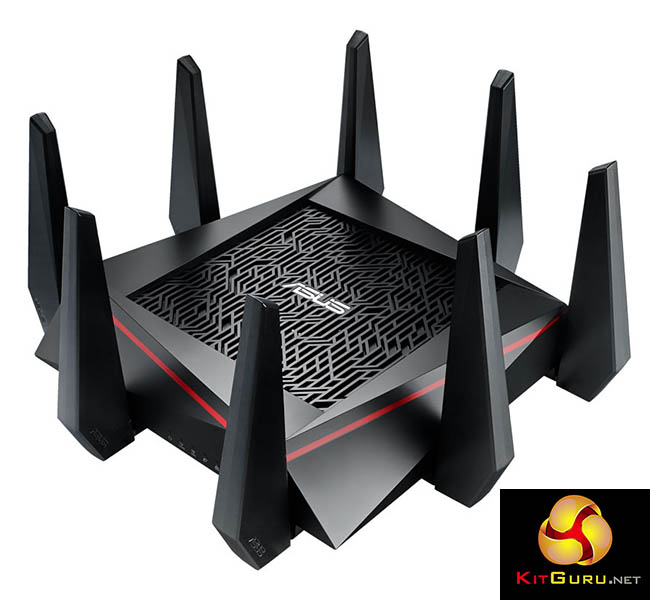 But on those routers they have to share the same 5GHz channel, so bandwidth will have to be split between them. With the RT-AC5300, both 5GHz networks are capable of 1733 Mbit/sec, independently of the other.

The RT-AC5300 has a 1.4GHz dual-core Broadcom BCM4709C0KFEBG processor, with 512MB of memory. It has three separate Broadcom SoCs, one for each wireless channel. Effectively the RT-AC5300 contains two routers, although they still share the same CPU.

Each wireless network uses the combined bandwidth of four 802.11ac MIMO streams, also known as a ‘4×4’ configuration. Annoyingly, although 4×4 routers have been around for over a year, there are still no laptops or adapters on the market that support such speeds. To get the full performance you’ll need to use either a 4×4 bridge, such as the Asus EA-AC87 (Review HERE) or a 4×4 router such as the Asus RT-AC3200 (Review HERE) set to bridge or access point mode, with your client connected via a LAN cable, transforming the router or bridge into a wireless dongle.

For most people, the considerable expense of purchasing multiple routers or extra bridge units for a better wireless signal around their home is not something worth considering. A single 802.11ac router has more than enough bandwidth for checking emails in the kitchen or watching YouTube videos, and even 802.11n is (just about) sufficient for such light use.

But if you want to perform some large data transfers, backing up 1TB of media, for example, it’s not really feasible, unless you’re getting full speed over 802.11ac. And it will take quite some time, impacting performance for other clients on your network. With the RT-AC5300, one client can be doing a huge file transfer on one wireless network while every other client enjoys full speed on the second network.

That feature might not be something everyone wants or needs, but it’s not something offered by any other router on the market.

And like other Asus routers, the RT-AC5300 comes with the AsusWRT software, an operating system for routers that offers a great interface and lots of features, from parental controls to an excellent QOS system and external storage management. In particular it has a useful tool called SmartConnect, which determines the position of a client and allocates them the fastest available wireless connection. With three wireless networks, this feature becomes a lot more useful.

In order to test the Asus RT-AC5300 we've needed a wireless setup that goes beyond a single laptop to measure performance. 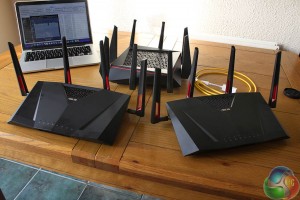 So along with the RT-AC5300, Asus sent us a pair of RT-AC88U routers, to be configured in bridge mode. These are already high-end 4×4 router models. But why two?

We've tested performance of both a single 4×4 wireless network and then run tests with both networks going at full pelt. This required us to have a second Asus RT-AC88U configured as a bridge.

In all the 4×4 tests, both clients were connected to either the RT-AC5300 or an RT-AC88U via ethernet cable, so the only wireless link was between the bridge and the router, to ensure there were no bottlenecks from slower wireless protocols.

In one test, we've had to use four computers, two of which were running WiFiPerf, our testing software of choice, while two other computers transferred a file over the other 5GHz wireless network. 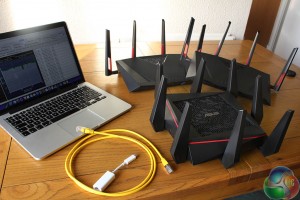 In the above image you can see some of the kit we used, including all three routers, the MacBook Pro laptop, a Thunderbolt ethernet adapter, and one of the many pieces of ethernet cable involved.