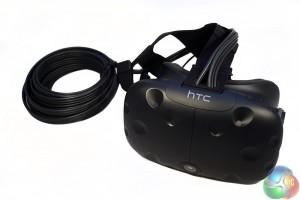 The HTC Vive headset itself, is a little strange looking, with its solid-black exterior and mottled surface. The Vive uses a hard plastic shell much more like the developer kits we have looked at in the past, but its pitted and dotted surface gives it a bit of a ‘fly eye’ look.

There are no real visual differences from the HTC Vive Pre we took a look at a couple of months ago, but the head-strap has had a minor redesign for improved comfort and grip. 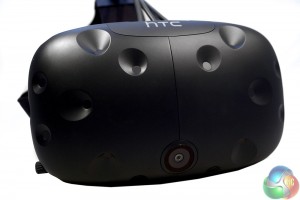 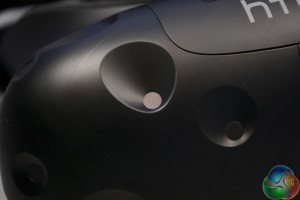 Those indents are infrared sensors, that pick up the laser pulses and passes from the Lighthouse base stations and let your PC know just where you are in your real space, so it can accurately recreate that in the digital one. The sensors extend across the front, around the sides and due to the angling are even partially visible from behind.

With the opposite placement of Lighthouse sensors this should mean that losing headset tracking should be very rare indeed. 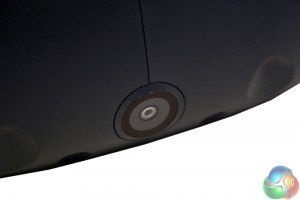 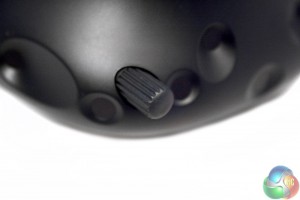 Another unique aspect of the Vive is its front facing camera. While the developer kit versions had a pair of twin cameras in a stereo configuration, the consumer release makes do with one. However it does give you a window to the outside world and can offer a Tron-like Chaperone system if needed.

Much like the Oculus Rift’s slider for adjusting interpupillary distance (IPD) – the Vive has its own method, though it is a small twist knob instead. This widens and shortens the distance between the lenses, letting you find the perfect spot for your size and shape of face. 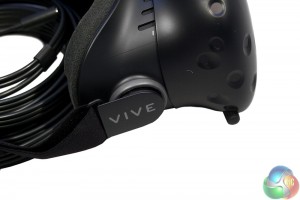 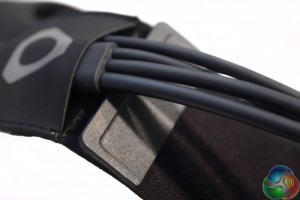 To help fit the Vive itself to your face, there are a number of adjustments you can make. The side straps feature Velcro to let you tweak how tight the overall design is on your head, while the top-mounted Velcro strap can similarly be adjusted to manage whereabouts on the back of your head that the weight of the headset is distributed. 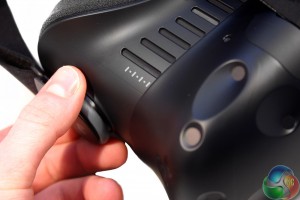 The two “Vive” logo-covered side knobs have a part to play too. If pulled out and rotated, they control the distance between the lenses and your eyes. The closer they are, the better field of view you have, but this makes for a quick adjustment for those with glasses or particularly long eyelashes. 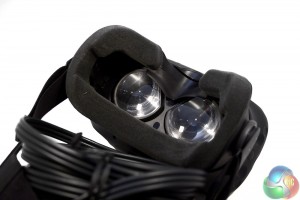 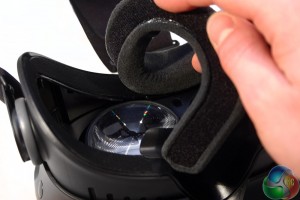 Looking inside the headset itself, there is a foam face plate that runs around the exterior. This provides comfortable padding for when using the headset and prevents light bleed around the edge. It has rounded edges, so there should be no scratching and it can be removed if you wish to fit an alternative, or the thinner-face version that also comes bundled with the headset. 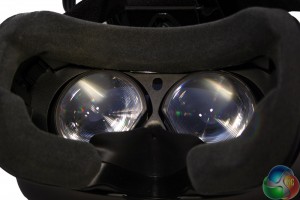 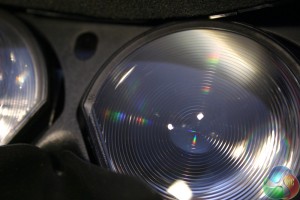 Nestled inside the headset we have the two near-circular lenses that make all of the magic happen. These are fresnel design, with obvious concentric circles typical of that. HTC/Valve opted for less bespoke lenses here than we saw on the Rift, so it will be interesting to see what effect that has. 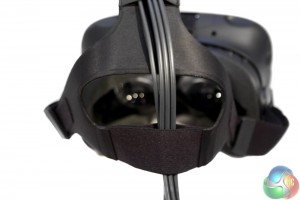 Moving around the back of the headset, we have the adjusted head strap. It now features a design that better cups the back of your head, making mounting easier and should improve weight distribution. 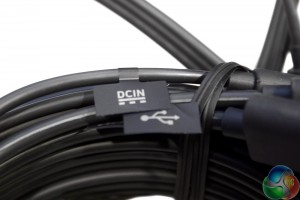 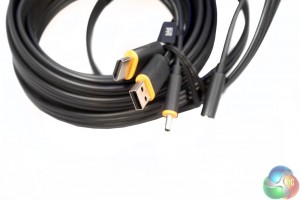 The cables for the Vive are multitudinous, thick and long. Measuring in at 15ft, to give you plenty of room to move around, they are surprisingly thick and heavy. However they are durable, which is good, because chances are you are going to stand on them at some point.

Despite the number of cables though, they are all wrapped together, easily labelled, fitted with a sturdy rubber coating and feature yellow tipped headers, which as well as making them easier to distinguish adds a nice bit of visual flair.

In total, the Vive connects a USB, HDMI and power cable up to its link box, with a 3.5mm audio jack for attaching headphones. 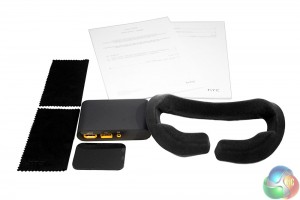 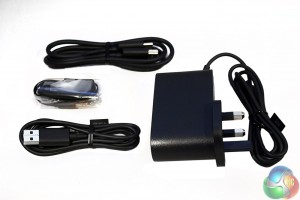 Along with the headset itself, there are a number of accessories: 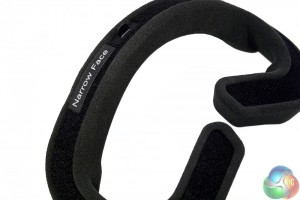 Do you have a narrow face?