The HTC Vive headset is a pretty well put together piece of kit. It is sturdy and robust – I have hit it into the wall a couple of times, so can speak from experience – and it has enough give where it needs to to allow a comfortable fit when adjusting.

It is quite a chunky piece of kit. Google Glass this is not, you will know when you are wearing it and it protrudes a good few inches from your face, so you may find yourself bumping the controllers into it at times, while you get used to the new depth of your own face!

The strap system are good, letting you adjust the fit of the overhead and side straps via velcro and elastic. The head-band fits comfortably over your head and helps funnel the cables to your back, where they are mostly unobtrusive.

You can also adjust while the headset is on, which makes things easy, though the top-strap does occasionally get stuck under the cables which can take a bit of fiddling. A second pair of hands may be useful for the first set up, but it is not necessary. 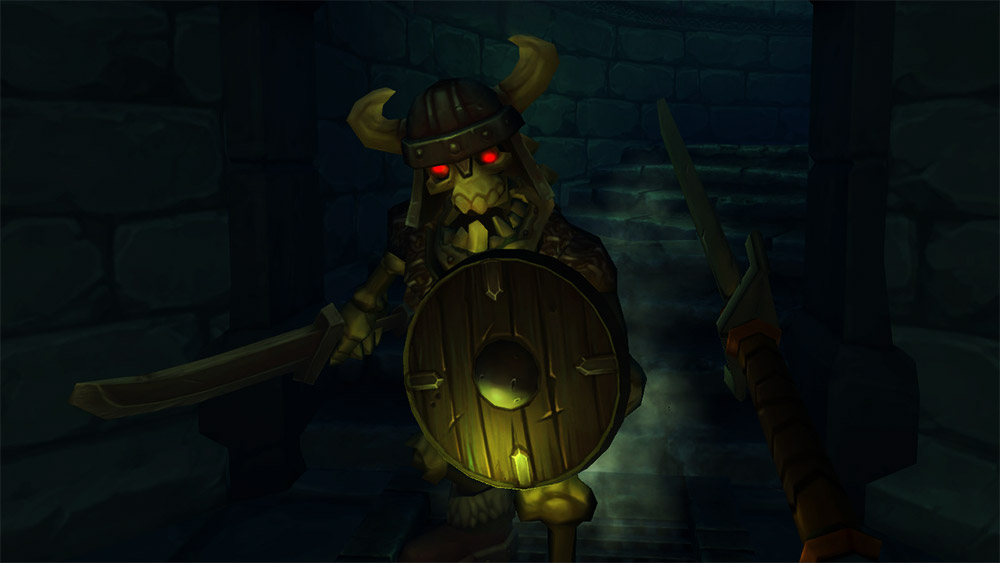 As great as Vanishing realms is, looking down to access your inventory is annoying

The weighting (550g) is good, but not great. Even if you have it fitted just right with the head strap on your rear-head ridge and the straps tightened on the side properly, it is still a bit too front loaded. This does not manifest itself very often, but if you ever play a game where there is a requirement to look down, you will find the headset slipping ‘upwards’ on your face.

This causes some problems beyond fitting, which we will address more in the optics section.

It is easy to adjust distance between your eyes and lenses, using the side-strap controls. Pulling the knobs away from the frame and twisting them gives you a manual control, a little like the Oculus Rift DK2 headset. Interpuppilary distance is easily controlled with the scroll knob, with an on-screen display popping up to help you adjust it to a specific number.

The headphones that come with the Vive are earbuds that hook up to the 3.5mm connector off-of the main cable strip. These ones have a shorter cable than the Vive Pre’s bundled set, which was a good choice. However as with the Pre’s I struggled at times to keep them in my ears during rigorous play. Quality wise they were great, but I have always had difficulty with in-ear earbuds, so would recommend a wireless over the ear set if you have it, instead.

The foam padding that cushions your face is nice and comfortable and has rounded edges, so there is nothing sharp to scratch you (as was the case with the Rift at times). However I have read that it is thicker than it need be and that some users have installed thinner foam to provide a greater field of view and clarity.

I will give that a try in the comings weeks, but as it is an aftermarket adjustment, I will not be covering that in this review.

Overall, while a solid build, the Vive does leave me excited for a second generation headset which will no doubt trim down a lot and improve the weighting more, so that it has a more solid fit.

The visuals with the Vive are truly excellent. A big step beyond what you might have been used to with developer kit headsets, the Vive has quite a bright, crisp look to its panels which means that although the screen door effect is almost non-existent now, if you look for it you can still see it. However when you are in the middle of a game, especially with darker scenes, you quickly forget it exists at all.

The resolution is still lacking for long distance viewing, with games like Elite Dangerous seeming quite blurred and jagged in the distance. Up close however, in games with smaller scale experiences and more intimate environments, everything looks phenomenal. Items are very real looking and text is crisp and clear.

With all VR headsets, there tends to be a sweet spot and with the Vive, that sweet spot is dead centre and not much further. Looking with your eyes along to the edge will find you struggling to read text at times as it blurs towards the edges of the lenses, but much of that can be fixed with some adjustment of the headset straps. 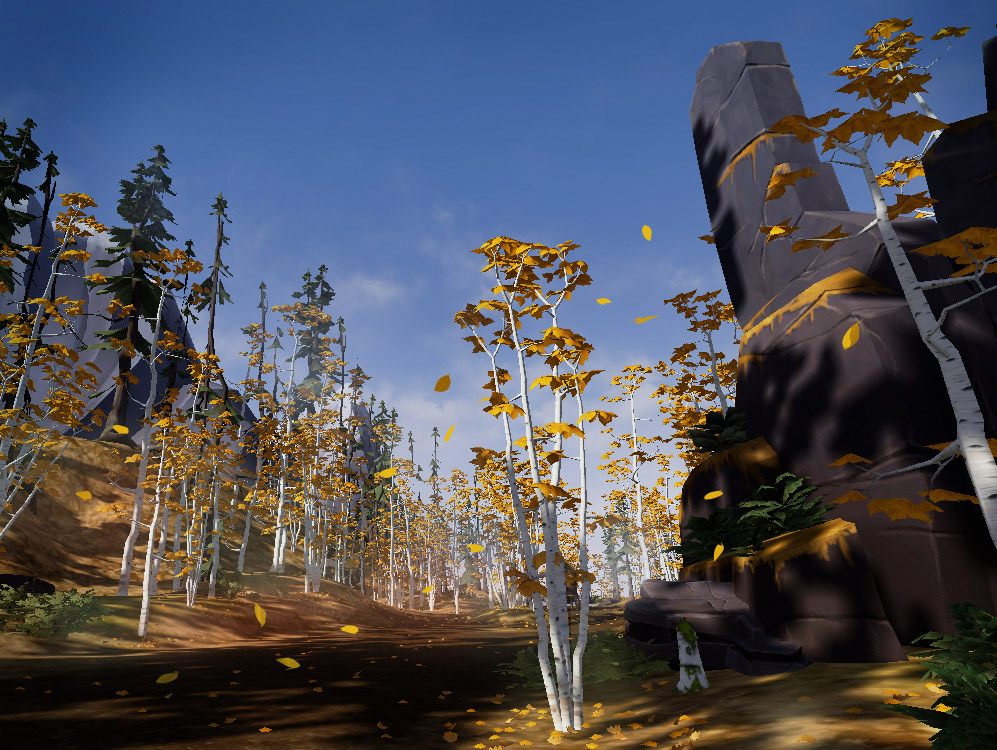 Because of this centralised sweet-spot, it is incredibly important with the Vive that you find the right spot for you. That includes getting the IPD adjusted right – the height, placement of the head straps etc.

All of that is doubly important because as I mentioned above, when looking down the weighting of the Vive means it slips away from your eyes slightly, leaving the sweet spot not where you want it. This means you can find yourself sometimes grabbing hold of it when looking directly down.

Because of that I would like to see developers avoid scenarios where you are forced to look down at 90 degrees from the horizontal, as it is quite an immersion breaking moment when the world becomes blurry as it slips.

That said, the field of view (FOV) on the Vive is excellent. Unlike its Oculus cousin, I never find myself noticing the edges of the lenses. The vertical field of view is especially good and there is an ongoing discussion about reducing the amount of foam padding the headset has, as that improves the FOV even more.

I have yet to try that myself, but by pressing the headset hard into your face, you can appreciate how that would work. I look forward to trying it in the future.

Also worth mentioning is the improved refresh rate of the displays the Vive uses over developer kits. Upping it to 90Hz has made a great difference in reducing nausea, something I’ll discuss more in the section below.

Overall visually, the Vive is absolutely fantastic. There are certainly improvements that can be made, to the field of view, the size of the sweet spot and the resolution of the displays, but this is a fantastic first step on that road and it is up there with the best.

Unlike the Oculus Rift, where you can use both Oculus Home and Steam, the Vive uses just one platform for its games: Steam VR. This is built into the main Steam software and once installed can be opened up by clicking a small VR button in the top right hand corner – much like you would do if opening up Big Picture.

Set up with it is somewhat lengthy, but not overly complicated. For a first time user, expect to spend half an hour to an hour placing sensors, installing software and getting your room scale set up initiated. 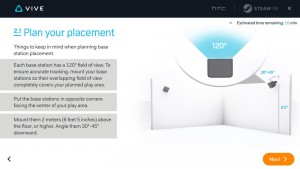 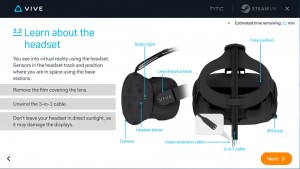 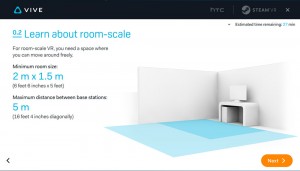 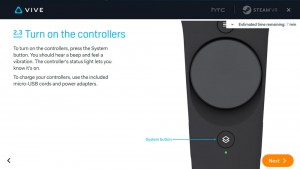 It is that latter step that can take a bit of thought too, since you need a minimum by 2m x 1.5m space to move around in if you want room scale. You can do seated or standing experiences when stationary without clearing a bunch of space, but roomscale is very much worth exploring if you can, as it is perhaps the biggest selling point of the Vive over its main competitor.

You are talked through the set up process by a Valve tutorial system and some little stick figures which you will be familiar with if you have ever explored the Portal universe.

You will need to orient your room and measure out your space using one of the controllers, but again even though this is not something you will have done with any products in the past, Valve holds your hand very well throughout.

Once things are up and running, all you have to do to initiate VR is open up SteamVR and put the headset on. From there you find yourself in a vast, open plain at night, with a message that reads “This is Real” painted somewhere in the distance.

Hitting the menu button pops up a menu very similar to Steam Big Picture, but free floating based on your current orientation. From there you can scroll through your games and launch them without much difficulty, sorting them by their compatibility if you prefer. 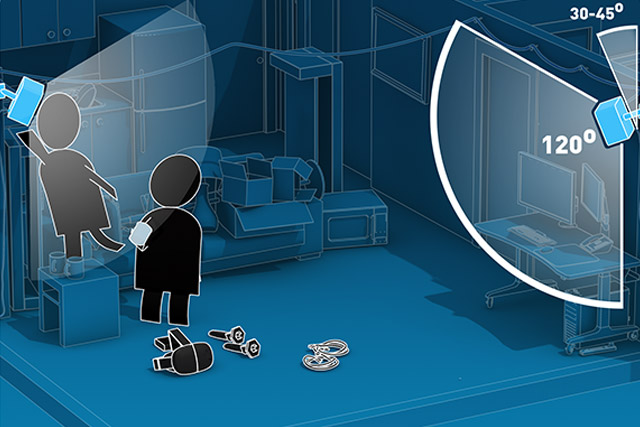 Because this is based on Steam, Steam VR is a pretty fully featured platform. You can use voice chat using the in-headset microphone, chat to people using twin thumbstick keyboard inputs and complete all of the usual functions of Steam usage, but within VR. Using Steam’s Theatre mode or Steam Big Screen, you do not even need to just play VR games as you can switch to a traditional game and play it on a giant virtual screen if you prefer.

Overall Steam VR is a pretty good place to launch your virtual reality experience from, it is just still a little buggy. It has grown much better since I started this review, but I still experience semi-regular crashes, especially upon exciting games and occasionally they do not start at all, leading me to pull off the headset, close the game-window down and start the process again.

While functional, Steam VR still needs a bit more time to operate as smoothly within VR as it does without.

Although technically just a Steam VR skin, the HTC Vive platform is worth a quick mention. It works well enough and offers a more Oculus Home-like experience, but really it has little additional function beyond that of the Steam VR software and indeed, you basically pull up a streamlined version of Steam to launch any experiences.

There are a few apps you can utilise, but that feature is still in its infancy.