This generation has seen the PlayStation brand perform stronger than ever, with the PlayStation 4 cementing itself as one of the best selling consoles of all time. With that, at CES 2020, the console manufacturer gave us an insight into how the various PlayStation services have been performing (hint: very well). Announced by Sony Interactive Entertainment’s President, Jim Ryan, the PlayStation 4 has now sold over 106 million units – among other achievements.

The PlayStation 4 boasted other impressive statistics, such as the fact that over 1.15 billion PS4 games have been sold (an average ratio of 10.85 games per console). PlayStation Plus subscriber figures have also seen steady growth, with the number of users paying for the service increasing to 38.8 million. Lastly, it was announced that PlayStation VR has now sold over 5 million units, continuing its reign as the best selling VR headset. 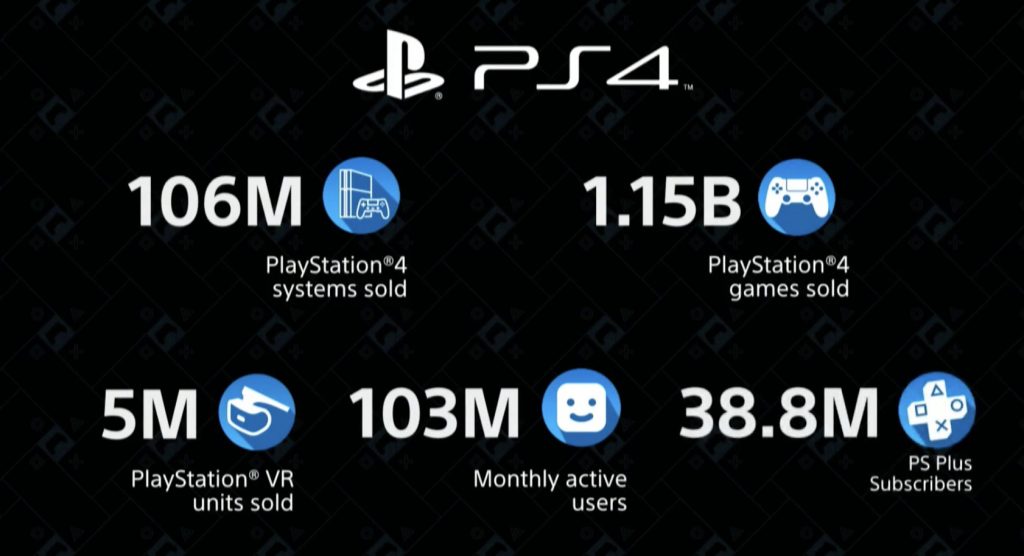 While the PS4’s growth has certainly slowed, with the console sell-though for 2019 landing at 14.4 million units (compared to its peak in 2017, at 20.2 million), this is still higher than the PlayStation 3’s peak shipments of 14.3 million units in 2011 – showcasing just how successful the PlayStation 4 really is in comparison.

Commenting on the success, Jim Ryan said “I am very pleased to see that so many PlayStation fans value the unparalleled entertainment experience on PS4. This has been made possible by the support we have from our partners and fans since launching PlayStation in 1994, and I would like to truly thank everyone.”

KitGuru says: With the PlayStation 4 being such a success, what do you think this means for the upcoming PS5? How many units do you think the PS4 will sell in its lifetime? Do you think any console will ever surpass the PS2’s 157 million? Let us know down below.