The DeepCool AS500 Plus is a single-tower air cooler that looks moderately sized upon initial examination but the heft of the overall cooler is evident once you feel its 1kg net weight. Two DeepCool TF140S PWM fans are used in push-pull configuration; these 140mm, fluid dynamic bearing, non-LED fans spin at 500-1200 RPM, giving them a decent range of speed operations.

A nickel-plated copper base feeds into five 6mm heatpipes. The heatpipes are mounted in a U-type configuration through the fairly densely packed aluminium fin array. One of the key features that DeepCool highlights is the AS500 Plus cooler’s slim overall profile that makes it ideal for use with tall memory modules.

A strip of A-RGB LED lighting is mounted around the black plastic shroud atop the fin stack. The LED lighting is controlled via the usual motherboard methods or via a bundled in-line controller. Worth noting is that the shroud marks quickly, as shown by our remnant grey thermal paste that cannot be cleaned off easily.

Overall installation for the DeepCool AS500 Plus is very straightforward and swift. This is aided by DeepCool’s clear instructions.

Four posts screw directly into the reference AMD backplate. This first step is easy whether the motherboard is on a table or whether it is installed inside the chassis. Two brackets then screw on top of the pillars and are tightened in position. The heatsink is mounted with both fans removed in order to access the spring-loaded retention screws. Both fans are then clipped onto the heatsink at the user-defined height level. 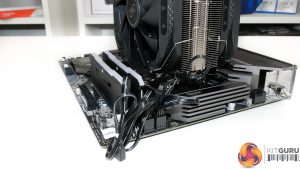 To summarise, DeepCool uses a quick, easy, and effective installation method.  Plus, the RAM slots are fully accessible on our test motherboard even with the cooler installed – a nice bonus.

The Arctic Freezer 50 is a dual-tower, dual-fan air cooler that weighs in at a hefty 1.2kg and is priced around £60 in the UK. Much of the external body is covered by black plastic shrouds, including the two fans. The top shroud area houses the 13 A-RGB LEDs which includes the Arctic logo and the LED light bars.

The six 6mm heatpipes interact with a CPU heatspreader via the direct touch method that we often see with cheaper, lower-end CPU coolers, albeit with some benefits. It will be interesting to see how the small Heatpipe Direct Touch base handles the concentrated, heavy thermal load of the overclocked Zen 3 16-core.

The two fans are from Arctic’s higher-end P-series range and are clearly optimised for high-pressure performance as indicated by the blade sweep. The front 120mm unit is rated at 200-1800 RPM. The centre 140mm fan is rated at 200-1700 RPM. Both fans clearly offer a good range of speed operation.

Arctic advertises RAM clearance of around 37.5mm as one of the Freezer 50’s strengths. This is misleading as 37.5mm is not particularly tall for RGB memory modules. Worse still is the inability to mount the front fan at a different height level like we see on competing coolers. As far as RAM clearance and flexibility goes, the Arctic Freezer 50 scores badly, despite the misplaced marketing claims.

Installation of the Freezer 50 is straightforward from the heatsink perspective. Four posts screw down onto the AM4 backplate and then two metal retention bars are screwed on top of the spacer posts. With the central fan removed, the cooler is screwed onto the retention bars.

Now comes the overly tricky part – securing the central fan in position. This is needlessly difficult as the fan slides in place but then needs to be clipped by the left and right shroud sections on the bottom of the heatsink. The plastic pieces have to be bent out of position and then secured and this feels a little scary on times due to risk of snapping any plastic.

Notably, this method is very difficult if installing the cooler inside of chassis as the proximity to top fans and motherboard VRM heatsink provides access woes. Once clipped into position, though, the mount is secure. 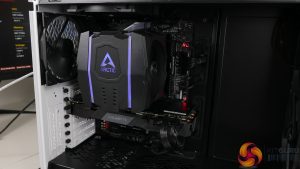 Overall, a reasonably straightforward installation process, but the attachment method for the central fan could do with improvement.

Also worth noting is interference with those horizontal retention bars. Capacitors on our Gigabyte B550 Aorus Master test motherboard were actually touched by the retention bar, though the actual interference seemed to be minimal. This is something to bear in mind.

The Cooler Master MasterAir MA624 Stealth is a dual-fan, dual-tower air cooler that weighs in at 1.3kg. The all-black unit has an alluring aesthetic appearance that is void of RGB lighting or flashy colours, which will be refreshing to many buyers in 2021. I guess my only appearance criticism would be that the front 140mm fan positioning is a little awkward as it does not sit flush with the rest of the heatsink. But this is a common trade-off when increasing RAM clearance.

Six heatpipes exit the nickel-plated base and feed into the dual aluminium fin arrays. The two fans we would consider to be main are 140mm SickleFlow versions with 650-1400 RPM rated PWM speeds. At 1400 RPM top speed, Cooler Master looks to be gunning for low-noise operation. Cooler Master includes a third fan – a 120mm SickleFlow blower with 650-1800 RPM rated PWM speed. This is intended for use with over-sized RAM modules.

MSRP for the Cooler Master MasterAir MA624 Stealth is £99.99 in the UK with availability targeting the end of March.

Rather than using the conventional AM4 backplate, Cooler Master opts for its own custom backplate and 4 pins that push through and are then held in place. Two retention brackets are screwed onto four front-side pillars that hold the backplate in position.

The cooler in its single-fan mode is then placed onto the CPU and secured by tightening the two protruding top-side screws. This final parts of the heatsink installation is very good as the central fan does not need removal.

Overall, the MasterAir MA624 Stealth mounting system starts off a little fiddly with the custom AMD backplate but then improves drastically to the point of the excellent top-side screw tightening.

The IceGiant ProSiphon Elite is a 240mm-width class air-type CPU cooler that weighs in at a whopping 1440g on its own or 2kg with the four Arctic P12 PWM 300-2300 RPM fans installed. The unit is a gravity-driven, two-phase cooling solution that leverages thermosiphon technology instead of conventional heatpipes.

Importantly, thermosiphon cooling technology is used to transfer heat away from the aluminium evaporator (baseplate/cold plate, if you like). The thermal energy boils the internal fluid, the vapour from which travels through the three condensers and dumps its heat off to the fin array, the vapour is then condensed back into liquid and is gravity-fed back down to the evaporator to complete the continuous cycle.

Effectively, IceGiant is gunning for liquid cooling levels of heat dissipation capacity by bypassing conventional heatpipes, whilst aiming to do so without the liquid cooling drawbacks such as points of failure. You need to pay attention to the supported mounting orientation, but this won’t be an issue for conventional users’ chassis usage.

RAM clearance is deceptively good at 48mm, though you will have to install modules before the cooler given its design. Impressively, the unit ships with a 10-year warranty which is market-leading for a cooler and a confidence-inspiring indication of quality and durability.

Pricing is around £170 in the UK as the IceGiant ProSiphon Elite is intended for particularly heavy cooling loads, such as 300W+ HEDT processors. It will be interesting to see how it handles the smaller heatspreader and lower thermal load of the 5950X.

Installation is straightforward. You position the four plastic spaces on top of the default AM4 backplate. The metal bracket is then orientated correctly and screwed into position. The two-fan equipped ProSiphon Elite is the dropped onto the CPU and screwed into place. 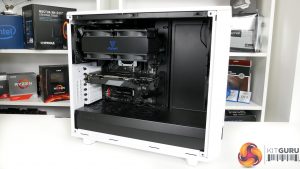 The final two front-side fans can be installed. This can be a little tricky inside a chassis but IceGiant includes an appropriately sized screwdriver.