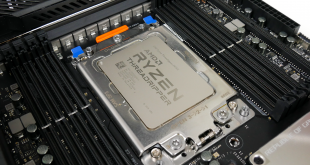 AMD's new High-End Desktop (HEDT) flagships have launched with an updated socket and a brand-new chipset. The new 32-core Ryzen Threadripper 3970X leads the stack and the 24-core 3960X backs it up. Based on the new Zen 2 architecture and TSMC's 7nm process technology, can these $1399 and $1999 processors prove their worth in demanding workloads? And how will they perform against Intel's price-reduced HEDT competition from Cascade Lake-X? 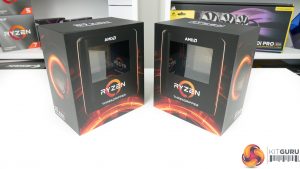 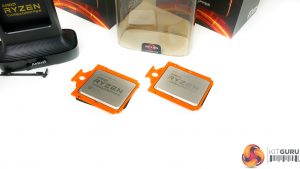 The $1999 3970X will ship in 32-core, 64-thread form via its 8 CCX and 4 CCD design. The lower cost 3960X is priced at $1399 and its 24 cores are built on the same four CCD design but with two cores per CCD disabled.  The pricing for Threadripper clearly spells a hefty price premium for these parts versus AM4 Ryzen 3000. However, these are now the highest core count prosumer/non-server CPUs on the market (excluding AMD's old Zen+ products) … until the 64-core Threadripper 3990X in 2020 – yes, it has been confirmed!

Base frequency for the 32-core part is 3.7GHz and the 3960X is 100MHz higher at 3.8GHz. Both chips feature a maximum Precision Boost 2 frequency of 4.5GHz. That is pretty solid for such high core count chips and clearly shows the value of TSMC's efficient 7nm process, especially when the reasonable 280W TDP is factored in. The frequencies represent an increase versus the 12nm Global Foundries-based Threadripper 2000 WX processors that these chips now sit alongside, not replace, in AMD's product stack.

You get 128MB of L3 cache on both CPUs by virtue of 8 CCXs being deployed. And the same 512KB of L2 per core as for other Zen 2 parts is used, taking the 3970X's total L2+L3 cache to 144MB and the 3960X's to 140MB. Each CCX is connected to the dedicated IO die via Infinity Fabric links which have their frequency tied to the DRAM clock from your memory modules. 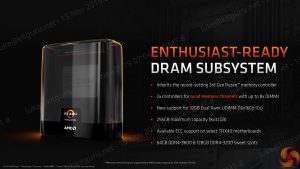 Support for quad-channel memory with up to 256GB capacity is provided due to the 32GB capacity limitation of currently available DIMMs in an eight-slot board. ECC support is available, but this is down to the motherboard vendor to implement. In terms of frequency, the situation is slightly complex. Fundamentally, memory support is the same as with Ryzen 3000 as this is still using the Zen 2 memory controller. However, there are more DIMMs to power and manage for Threadripper’s quad-channel configuration. 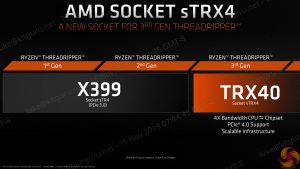 Due to improved connectivity between the CPU and chipset, in addition to the ‘future scalability’ of the TRX40 platform, Ryzen Threadripper 3000 sTRX4 socket CPUs are not backwards compatible with the socket TR4/X399 platform and vice versa. This is annoying to users who have invested heavily in their X399 motherboard or those who were hoping to jump on a cheap Threadripper 2920X before upgrading to the new 24-core or 32-core (or 64-core) model in the future.

However, this doesn’t seem to be a change of socket just for the sake of changing socket. There's a fatter 8-lane PCIe Gen 4 pipe between the CPU and chipset, which is certainly a feature worthy of a motherboard upgrade. Additionally, the higher TDP for the processors and the promise of a 64-core chip in 2020, seem like valid reasons for AMD’s decision to go with a new socket.

Thankfully, at least your TR4 cooler will continue to work as the mounting points have been maintained.

The CPU features a total of 64 PCIe 4.0 lanes, and motherboard vendors are given a strong amount of flexibility as to their deployment. Directly from the CPU, two sets of four-lane links can be deployed as PCIe 4.0 x4 slots, four SATA connections, or an x4 PCIe 4.0 NVMe mount. This is defined by the motherboard vendor and will vary between models.

That leaves 56 lanes on the CPU but ‘only’ 48 of these are usable to the expansion slots or other devices. Instead, 8 PCIe 4.0 lanes are used to connect the Ryzen Threadripper processor with the TRX40 chipset. 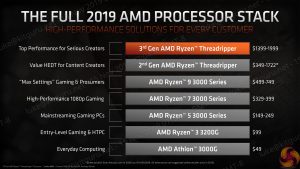 Clearly, both in terms of price and core counts, Threadripper 3000 doesn’t have a logical desktop (not Xeon) competitor from Intel given the new Cascade Lake-X HEDT pricing. Intel’s LGA 2066-based HEDT parts are competitors through way of being HEDT platforms, supporting quad-channel memory, and featuring a large number of on-chip PCIe lanes.

That’s the main comparison we will be focussing on in today’s review, despite the significant cost differences between the X299 platform with Intel’s revised Cascade Lake-X pricing and the new TRX40 platform. Also worth highlighting are the performance improvements versus previous-generation Threadripper 2000 processors, especially the 24-core, now-£900-ish Threadripper 2970WX and the 32-core, currently £1700 Threadripper 2990WX.

We expect both of these parts to drop in price to plug the gap between £750-1400 in AMD’s current CPU line up.

Before we dive into the performance for Threadripper 3000, let's take a closer look at the new TRX40 platform and AMD's recipe for fixing last year's problematic Threadripper 2970WX and 2990WX – the Zen 2 IO die.