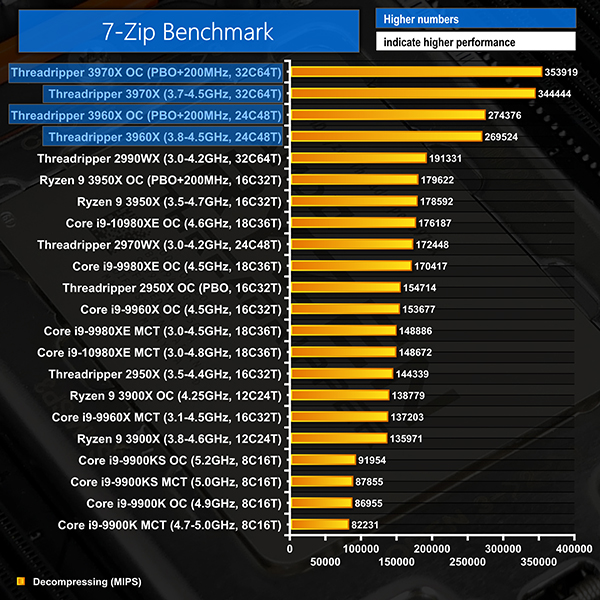 AMD’s Zen architecture has always been strong when it comes to file decompression, so it comes as no surprise to see the Threadripper 3000 chips delivering crushing victories. The performance improvement versus Zen+ predecessors is 80% for the 32-core 3970X and 56% for the 24-core 3960X. 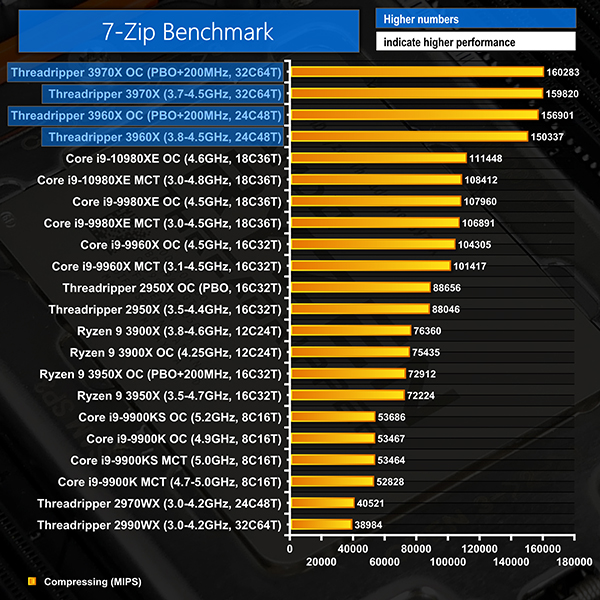 Plentiful bandwidth and a high core count combine to deliver strong 7-Zip compression performance for Threadripper 3000, especially when compared to the 2990WX and 2970WX with their off-die memory accessibility challenges.

Versus the roughly $1000 Intel HEDT flagship, AMD’s $1400 Threadripper 3960X is 39% quicker stock versus stock and 41% OC versus OC. This is a rare situation where preferential boost clocks delivered via PBO overclocking help AMD’s 24-core chip stretch its lead versus the Core i9-10980XE and its static 4.6GHz overclock.

The 32-core 3970X is faster again, though you’d need some pretty hefty or simultaneous 7-Zip compression workloads to take advantage of its higher core count. 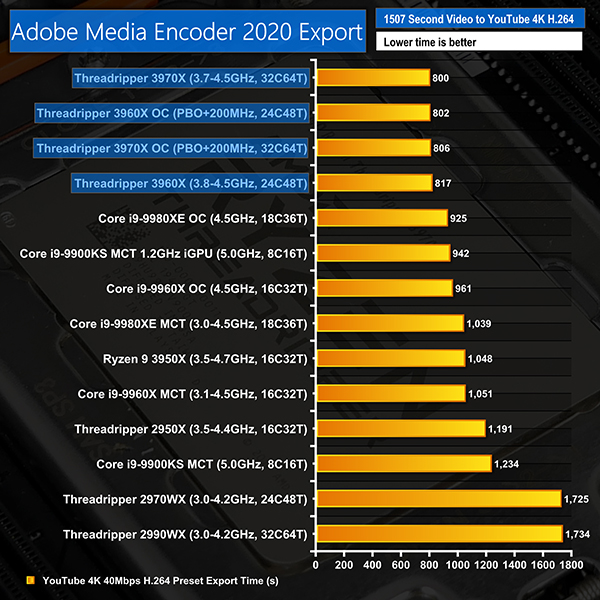 Despite Adobe Premiere Pro and Media Encoder commonly getting criticism for being poorly optimised to take advantage of high-end hardware, the Threadripper 3000 processors were actually able to offer the highest performance in our testing. We didn’t have access to the Core i9-10980XE for this test, however Threadripper 3000’s performance improvement over the Skylake-X 18-core, even when that’s overclocked to a lofty 4.5GHz, is clear.

Our H.264 YouTube 4K export isn’t demanding enough to saturate the 24-core or 32-core chips, as proven by the minor performance differences between the 3960X and 3970X. That leaves CPU cycles spare to work on other tasks, such as Lightroom photo editing or Handbrake video conversion, while also exporting the Adobe Premiere project.

We also see a solid performance improvement from the 16-core Ryzen 9 3950X to the 24-core Threadripper 3960X, and that may be important if you do a lot of high-value video editing in Premiere.

No memory or latency issues with these Zen 2 Threadripper processors were observed; the performance jumps over the 2970WX and 2990WX are colossal. 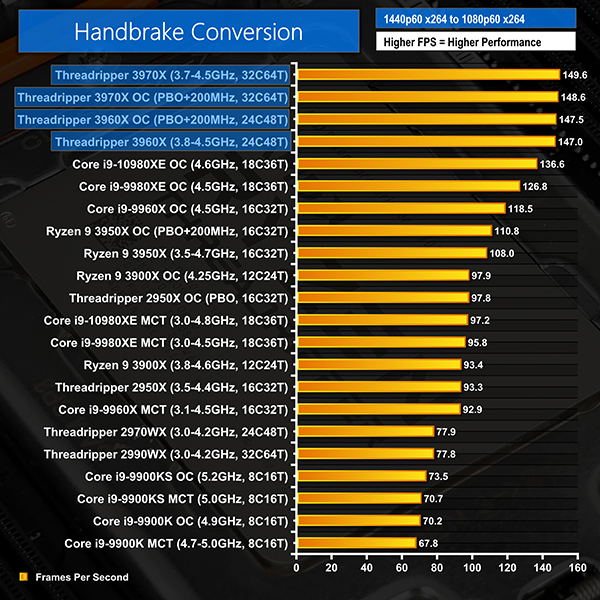 Even with Handbrake’s inability to use all the CPU resources in this H.264 conversion test, both Threadripper 3000 chips lay their claim to top spot in our chart.

Stock versus stock, the 3970X beats its 2990WX predecessor by 92% and Intel’s i9-10980XE by 54%. The lower performance for Threadripper 2000 WX parts is tied to their unique memory controller topology that penalises some cores with latency penalties for accessing resources that are off-die. The central IO chiplet design for Zen 2 and Threadripper 3000 clearly alleviates all such issues for Handbrake.

Intel’s HEDT parts come back with a strong fight when their sizeable frequency headroom is leveraged. With the i9-10980XE Overclocked to 4.6GHz, the Threadripper 3970X running PBO has its performance lead cut to 9%, while the overclocked 3960X only maintains a gap of +8%. 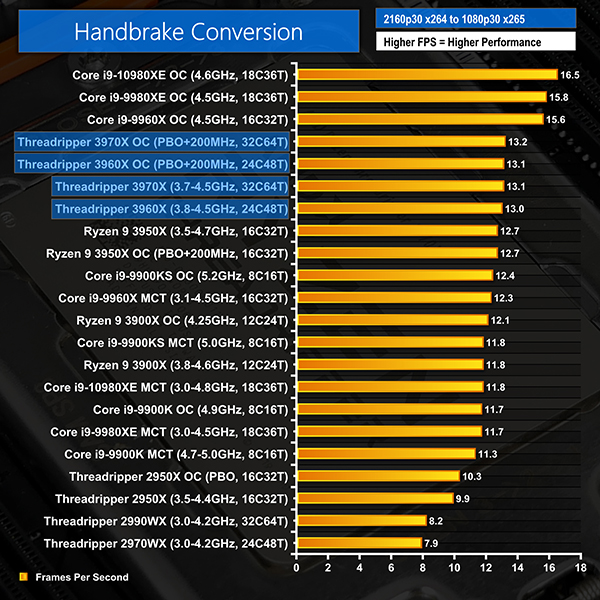 Granted, with all chips at stock, the 3970X and 3960X are faster than Intel’s 18-core flagship. Remove the AVX-induced speed reductions by overclocking the Intel HEDT part and it enjoys a performance lead of 25% over AMD’s $2000 flagship.

One key difference to point out here is overall resource utilisation, with the higher core count Threadripper 3000 parts understandably having more free resources to do other tasks, such as simultaneous video conversions… or gaming, if you’d prefer. However, if your workload only requires single-item video conversation and you cannot stack multiple tasks simultaneously, the 24 and 32 cores offered by Threadripper 3000 are clearly overkill. At least the performance increase over Threadripper 2000 WX parts is massive thanks to the improved IO topology.