The Dhrystone Integer performance test for all Haswell-powered chips uses the AVX2 instruction set, while the Ivy Bridge-E part relies upon SSE4.2 instructions. 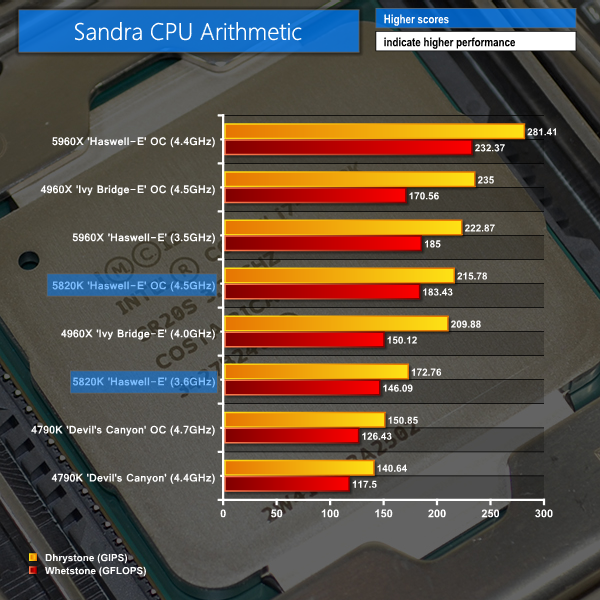 The Hashing Bandwidth test for all Haswell-powered chips uses the AVX2 instruction set, while the Ivy Bridge-E part relies upon AVX instructions. 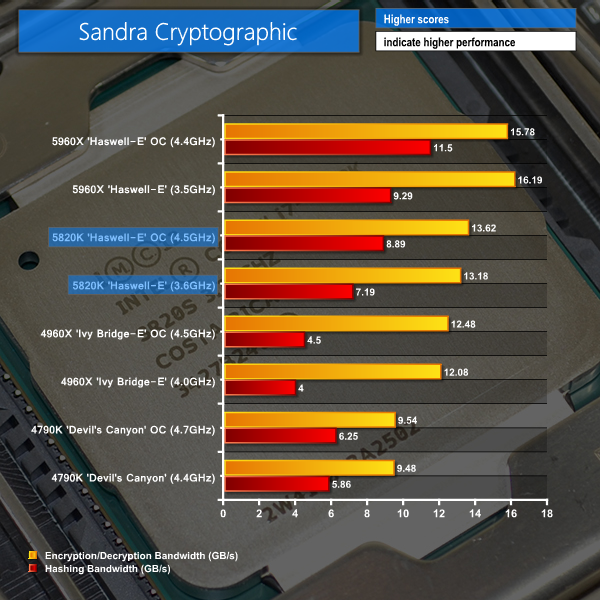 The 5820K, 5960X, and 4960X all use quad-channel memory interfaces, with the latter relying upon DDR3 modules and the former two supporting (the still immature) DDR4 technology. Devil’s Canyon supports dual-channel DDR3 memory. 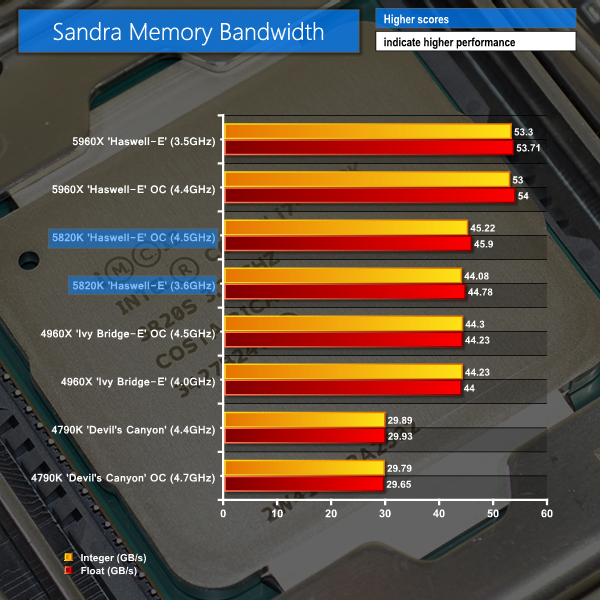 At first glance it looks like the 5820K is getting outperformed by IVB-E’s 4960X in Sandra’s Processor Arithmetic test. An advantage in the Dhrystone performance for the 4960X indicates that its SSE4.2 instruction set allows it to score higher in the Sandra benchmark, when compared to the AVX2 instructions used by all Haswell-based chips. AVX-based performance for the Haswell chips is far superior to previous micro-architectures, as proven by the Whetstone single-float scores.

Any negativities that the AVX2 instruction set may have provided in arithmetic performance are quickly turned into clear strengths for cryptographic operations. Hashing performance for the 5820K is significantly better than the 4960X and its AVX instruction set. The 5820K’s cryptographic performance advantages over the 4790K are in the region of 42% when both chips are overclocked. That’s a big difference to users who regularly deal with large amounts of protected data.

Memory bandwidth is somewhat secluded from processor performance. The data does, however, show differences between the quad- and dual-channel memory interfaces that high-end and mid-range processors support, respectively. Clearly the HEDT chips’ quad-channel memory interface offers significantly higher bandwidth than a dual-channel alternative, but that performance comes at increased RAM cost. What our chart does not show is the higher memory latency that DDR4 modules will operate at when compared to DDR3 kits of a similar running frequency.

It is also worth noting that memory bandwidth differences between the Haswell-E 5960X and 5820K chips are due to the use of different memory speeds and timings, not the processors themselves.