As was the case with Skylake, overclocking with Kaby Lake is fun! The voltage regulator is still separate from the CPU and the BCLK is completely open to be tweaked. Add in the process node optimisation and higher out-of-the-box frequencies and Kaby Lake starts to refresh fond memories of the old Sandy Bridge days of overclocking.

We gravitate our overclocking testing around adjusting the core ratio route with a static 100MHz BCLK. This is the most straightforward way of overclocking and is likely to be used by those who want quick, simple gains without the significant effort expenditure that BCLK tweaking requires.

Kaby Lake’s new AVX Offset Ratio feature is another factor to consider when overclocking. We decided against using it when overclocking our chip in case it caused issues with gathering data from the overclocked chip (though later testing highlighted its ability to function correctly). However, we would certainly advise readers to find a stable non-AVX frequency and a stable AVX frequency and then use the offset ratio to link the two together. This will allow the chip to operate at its maximum stable speed all the time without BSODing under AVX operations. 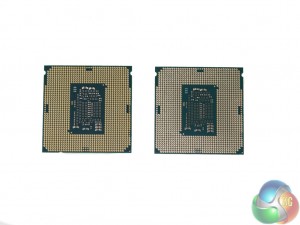 We initiated testing using a 1.40V CPU VCore for the overclocking tests. Using a strong CPU cooler (such as the Noctua D14 or Corsair H100i) is important when pushing Kaby Lake to 1.35V and above. Using a Corsair H110i GT we observed unusual thermal performance that seemed to be driven by Kaby Lake’s reaction to operations at certain stages of the Prime 95 v28.10 in-place large FFTs stability test.

Power consumption would spike by more than 50W and CPU temperatures would almost instantly shoot up to more than 90°C. When this unusual period of stress was complete, the CPU would drop back down to temperatures in the 70°C range. This is important as it effectively ruled out extended 1.4V testing without opting for custom liquid cooling or de-lidding the processor.

As such, the voltage level was quickly reduced to 1.35V CPU VCore, LLC Mode 4 was applied using our MSI Z270 Gaming Pro Carbon test motherboard as this delivered a continuous voltage close to 1.35V without significant drop or overshoot under load. Stability at the given frequency was confirmed once more than 1 hour of Prime 95 in-place large FFTs testing was completed without thermal throttling. 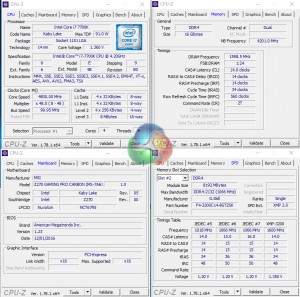 The best Prime-stable overclock that we could achieve using 1.35V was 4.8GHz (48 x 100MHz). This is as expected for a 1.35V VCore as bumping up to 5GHz with Prime-stability will generally require more than 1.4V and a very good chip (not to mention cooling), based on information we received.

Around 4.8GHz should be a safe bet for most 7700K users. Those who insist on Prime 95 stability and want to stick below 1.35V, as we did, may have to settle for 4.7GHz but it’s unlikely that anything lower will be necessary. At this level of voltage and stability testing, a strong AIO liquid cooler is effectively a must as air coolers will struggle unless very high speed fans are used. 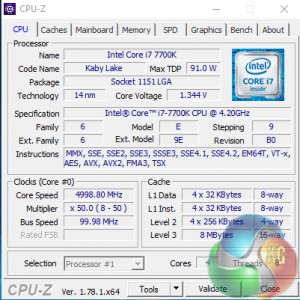 We pushed the chip to its limit at 1.35V which was 5.0GHz. This was not Prime 95 stable (workers would drop out) although it did pass an extended period of AIDA 64 stability testing as well as multiple Cinebench and Handbrake runs. It was effectively all-but Prime stable.

This is where the AVX offset ratio for Kaby Lake will prove useful. Our CPU is stable at 5.0GHz with 1.35V provided AVX workloads or Prime 95 are not loaded. In this case, we could easily set the CPU to 5.0GHz and then set a -2x multiplier AVX ratio offset to back the chip down to 4.8GHz when anything AVX-related is loaded.

Simply put, 5.0GHz without Prime 95 or harsh AVX stability should be achievable for 7700K users while also staying at around 1.35V or less. A good chip may push to 5.1GHz but that’s likely to require closer to 1.40V (or higher) to maintain stability. 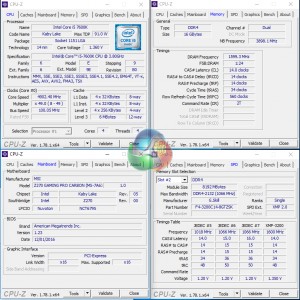 Superb overclocking performance continued down the scale to the i5-7600K. We managed to take our retail 7600K sample to 4.9GHz with complete Prime 95 stability. 5GHz should be achievable if Prime 95 stability is not required.

Similar temperature fluctuation behaviour was observed with the i5-7600K, though not to the same level as the i7-7700K. The chip would still spike to 90°C and higher using a Corsair H110i GT CPU cooler but the time spent at those higher temperature levels was lessened.

Pairing a £100+ AIO liquid cooler with a ~£200 CPU is unlikely. If you are using something more moderately priced to cool the i5-7600K, either backing off on the applied voltage or not using Prime 95 for stability testing would be good suggestions for keeping temperatures in check.

Bethesda was apparently in talks with Sony for Starfield timed-exclusivity

Prior to Microsoft’s acquisition of Bethesda, the publisher seemed to be getting pretty close to …