Note: The asterisk next to the Haswell-E Core i7 5820K and 5960X is because their data has been taken from a previous review using a slightly different test platform. Performance differences will be minimal hence why the data is used again but we deemed it important to point out the fact. 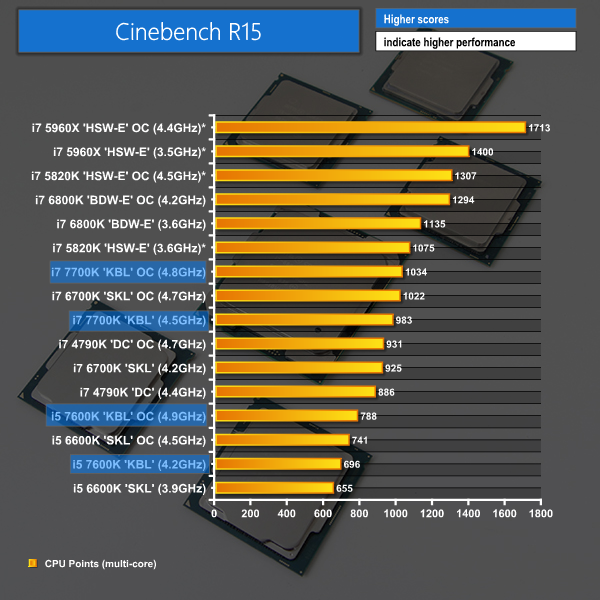 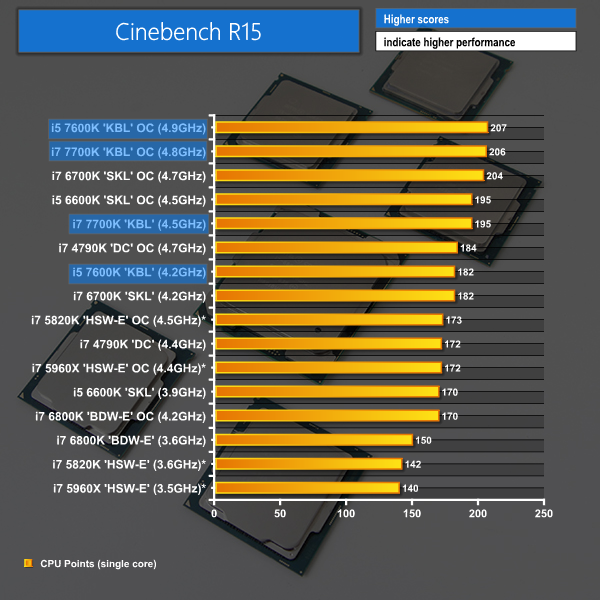 The recipe for success in Cinebench is a known – vast amounts of threads balanced with a good clock speed and architectural performance win the day. It’s unsurprising to see the 12- and 16-thread HEDT parts congregating at the top of the chart.

That doesn’t deter from the fact that the overclocked 7700K put in a stellar performance that sees it very close to matching a stock-clocked 5820K in the multi-thread test. The stock-clocked 4.5GHz 7700K is around 7% faster than the stock-clocked 4.2GHz 6700K it replaces. This comes as no surprise whatsoever given the Kaby Lake model’s 7% higher clock speed while using practically identical architecture.

Focussing on the i5 chips, their 4-core, 4-thread status leaves them battling at the bottom of the table, unable to compete with hyper-threaded i7 chips. Kaby Lake’s 7600K is around 6% faster than the stock Skylake 6600K. The new i5 opens up a greater lead when overclocked thanks to its superior frequency headroom making 4.9GHz a stable frequency. At 4.9GHz, Kaby Lake Core i5-7600K narrows the gap to a stock-clocked Devil’s Canyon 4790K quite significantly and is ‘only’ slower by around 11%.

No surprises when it comes to single-threaded performance; Skylake architecture (also used in Kaby Lake) sits at the top of the chart and is ordered in terms of frequency. The exception is where a 4.7GHz Haswell-powered 4790K sits between the 4.2GHz i5-7600K and 4.5GHz i7-7700K – a 500MHz clock speed boost for the Haswell i7 is just enough to let it outperform the 4.2GHz 7600K.

If the software you are using relies heavily on single-threaded performance, there is nothing faster in the consumer space than a high-frequency chip with Skylake microarchitecture. And that point about the chip being fast gives Kaby Lake the upper hand over original Skylake thanks to the optimised process technology allowing for generally higher top speeds. For perspective, overclocked Kaby Lake is 22% faster than overclocked Broadwell-E in single-threaded performance. 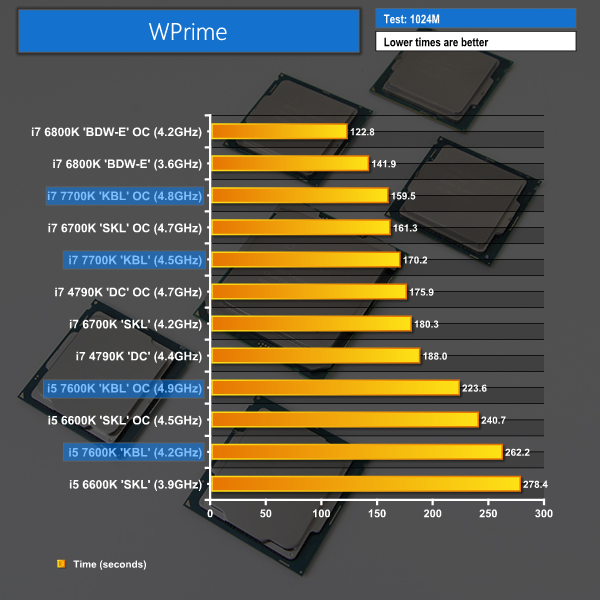 WPrime likes threads and speed with a sprinkle of microarchitecture. 12-threads for the Broadwell-E 6800K wins the day, even considering its 1.2GHz clock speed disadvantage against the overclocked 8-thread Kaby Lake i7. Kaby Lake generally beats out Skylake by virtue of its higher clock speed and greater overclocking potential.

The Devil’s Canyon 4790K sits at the bottom of the Core i7 hierarchy due to its older Haswell microarchitecture and 8 threads. Even with a 200MHz clock speed disadvantage, the Kaby Lake 7700K still outperforms the 4790K by just over 3%. 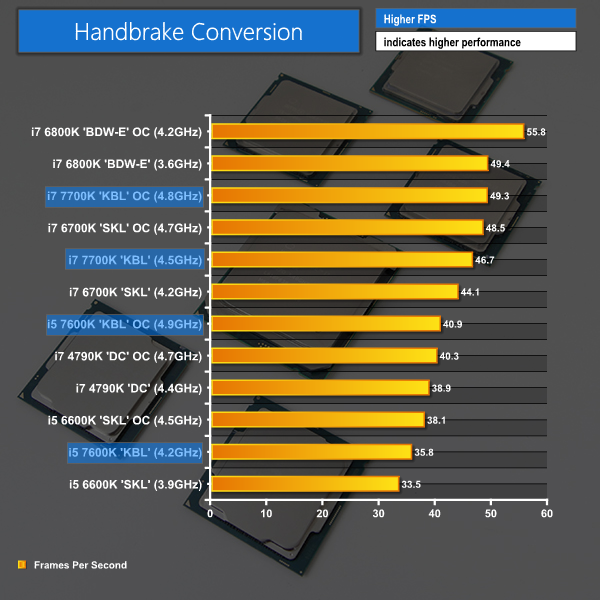 Our Handbrake test procedure allows all available threads to be fully loaded on each of the CPUs. Broadwell-E wins thanks to its six hyper-threaded cores but overclocked Kaby Lake is practically level with the stock-clocked 6800K (aided by KBL’s uses of DDR4-3200 dual-channel RAM vs BDW-E’s DDR4-2666 quad channel memory). This speaks volumes for the performance of the Skylake microarchitecture because a 1.2GHz (33%) clock speed advantage can offset the 6800K’s four additional (50% more) threads.

If you are a movie aficionado who uses Handbrake to convert films and load them onto a Plex media server, the high frequency potential of Kaby Lake chips make them a good choice using a price vs performance metric.

Note: The asterisk next to the Haswell-E Core i7 5820K and 5960X is because their data has been taken from a previous review using a slightly different test platform. Performance differences will be minimal hence why the data is used again but we deemed it important to point out the fact. 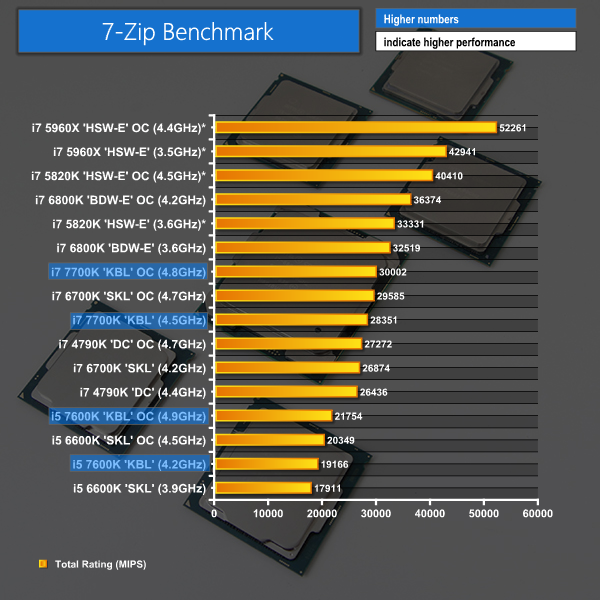 Balancing load across multiple threads is the best solution to tackling significant amounts of file compression and decompression using 7-Zip. The quad-core Kaby Lake i7 is outperformed by Broadwell-E’s six-core even when the latter is giving up 1.2GHz in clock speed.

Broadwell-E is faster than Kaby Lake when its high core count can be properly utilised. But there is also evidence in some tests that the overclocked 7700K’s significantly higher core frequency can practically eliminate the performance gap to a 12-thread 6800K operating at stock speeds.

If you run a large amount of multi-thread rendering or file compression and decompression, Kaby Lake will be at a disadvantage to the currently-available six-core Broadwell-E 6800K (although that chip is more expensive). If your operations rely heavily upon single-threaded performance, where microarchitecture plays a big part in the performance hierarchy, Kaby Lake is a good option that looks even more impressive thanks to its high clock speeds.