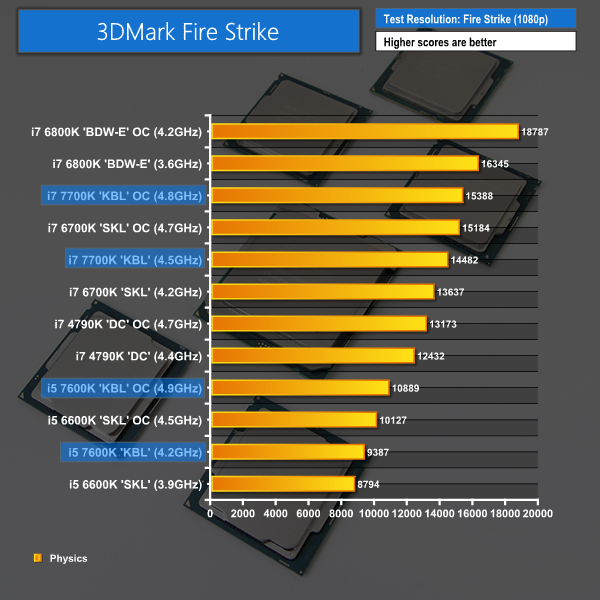 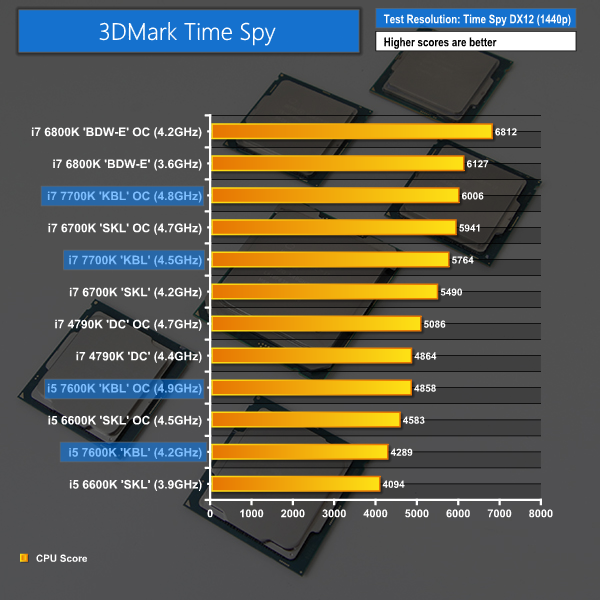 The ability of Fire Strike to leverage a high thread count in its Physics test shoot the BDW-E 6800K to the top of the performance chart, beating out the overclocked 7700K. As is the trend, Kaby Lake is faster than Skylake only due to its higher clock speeds.

Worth noting is the 4.8GHz 7700K's ability to outperform a 4.7GHz 4790K by more than 2000 points (17%). A similar margin is observed at stock speeds. But of course, this test is not entirely representative of real-world gaming performance. 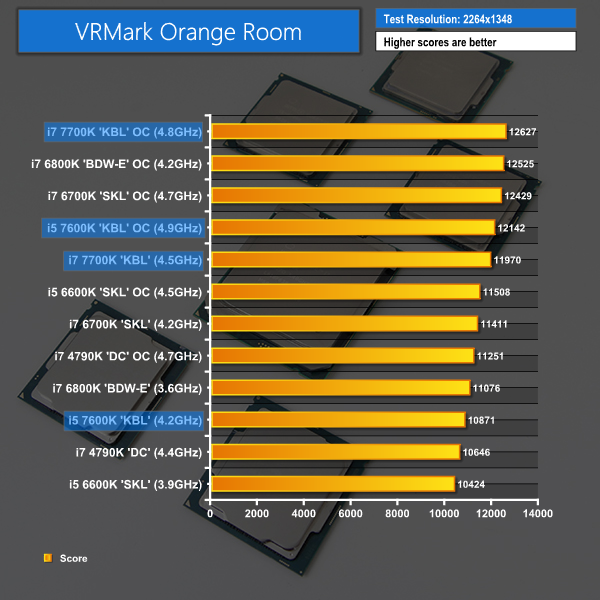 VRMark is more of a system-wide test that also puts heavy load on the graphics card. As such, it is hard to draw conclusions from the results. However, Kaby Lake does consistently put in solid performance numbers that sit it near the top of the chart when overclocked. 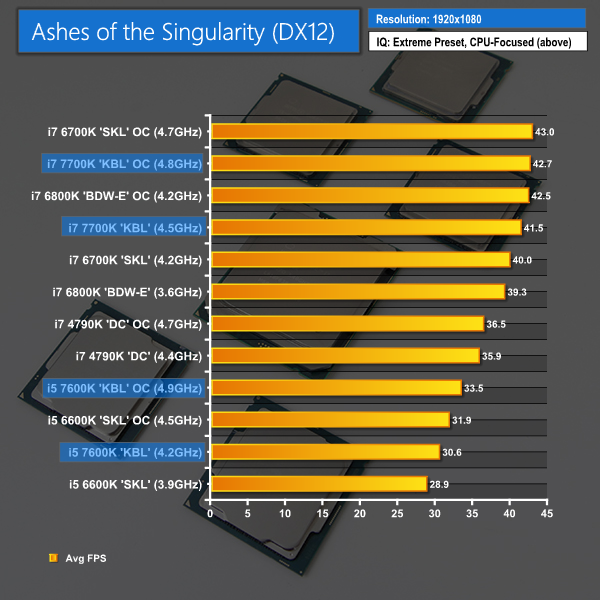 DirectX 12 and a CPU-punishing benchmark tool make Ashes of the Singularity a good way of testing gaming performance offered by different processors. The Skylake-powered i7s congregate towards the top of the chart thanks to their high frequencies and fast microarchitecture. The overclocked Skylake-based i7s perform similarly to the overclocked 12-thread 6800K.

If you like to play Ashes of the Singularity, the Kaby Lake Core i7-7700K (and, by extension, Skylake's i7-6700K) is a superb choice of CPU given its performance metrics and cost saving over the 6800K. 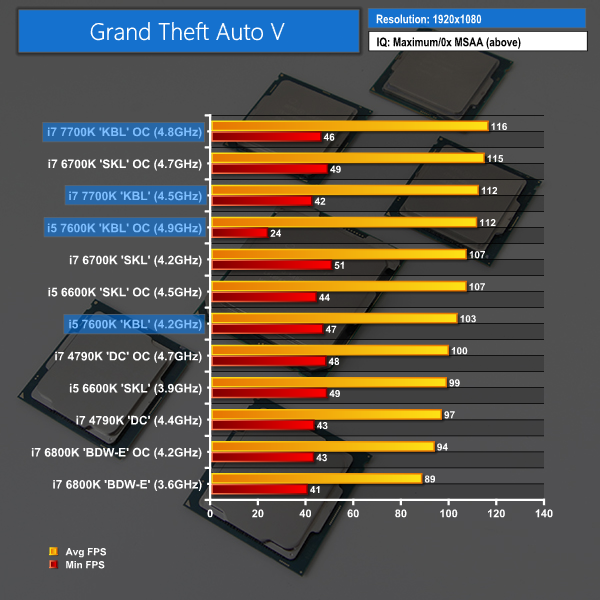 GTA V will happily use a double-digit number of threads if the processor has such capacity. But architecture and clock speed are of greater importance when trying to achieve high frame rates in GTA V. Kaby Lake takes the win when the i7-7700K is overclocked to 4.8GHz, beating out a 4.7GHz 6700K by a slim margin. The 4.5 stock-clocked i7-7700K also puts in a superb performance showing.

Highlighting the importance of clock speed to GTA V, the 4.9GHz overclocked 4-thread Kaby Lake i5-7600K shows the same average performance as the 8-thread 7700K clocked at 7700K. With that said, the overclocked 7600K consistently stuttered at certain points in the benchmark test which resulted in a reduced minimum frame rate. This was partially due to the chip being pinned at 100% load across all four threads, whereas the 8-thread i7s had a little more spare capacity (though there may also be a GTA V dislike for the overclocked configuration given the stock-clocked 7600K's smooth performance). It is worth noting that there is a relatively high level of variation in GTA V's minimum frame rates.

If you plan on pushing past 100 FPS in GTA V using the same settings as us, you are going to want a CPU powered by Skylake microarchitecture and the faster it can run, the better. That recipe spells out Kaby Lake thanks to its process node optimisation bumping up clock speeds in comparison to Skylake. An i5 will net you solid performance, especially when overclocked, but all of its cores will be pinned close to 100% load. If you want high frame rates and the ability to have some programs running in the background, a Skylake-powered i7 is a good choice thanks to GTA V's ability to use all eight of its threads.

The Witcher 3 is a free-roaming game which can feature heavy interaction from NPCs in densely-populated urban areas, making it ideal for testing CPU performance. The well-designed game engine is capable of providing heavy stress to a number of system components and will happily use more than four CPU threads when such hardware is available. We run a custom benchmark which is located in a heavily populated section of an urban town area. A 1080p resolution and Maximum quality settings are used (Nvidia Hairworks settings are disabled). 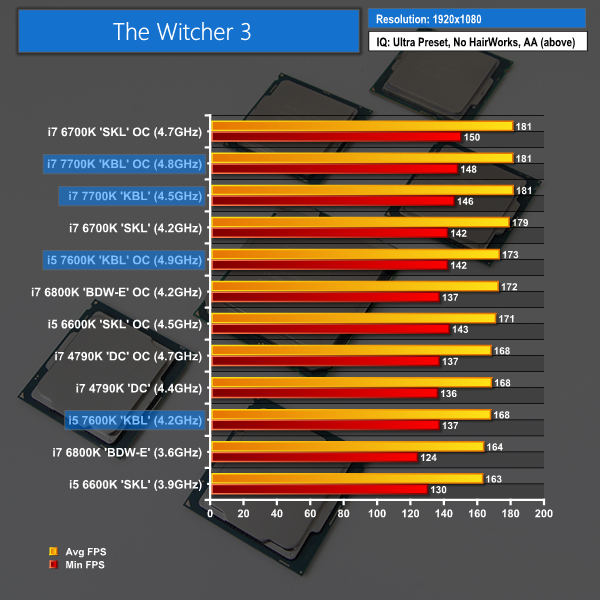 The Witcher 3 is another game that rewards clock speed and architecture performance but it has more of a liking for thread count than GTA V. Skylake-powered i7s rule the roost with the 4.5GHz+ chips all sitting at 181 FPS on average.

Things start to mix up a little more once the Skylake-powered i7 group is left. The 4.9GHz Kaby Lake i5-7600K puts in a solid performance thanks to its architecture and clock speed. Overclocked Broadwell-E is close behind, aided by its six physical cores that offset a frequency deficit.

Devil's Canyon's Core i7-4790K sits behind the overclocked Skylake-powered i5s and level with the stock 7600K in terms of average FPS. The interpretation here suggests that a bottleneck exists elsewhere in the LGA1150 chip's platform (likely the 2400MHz dual-channel DDR3 memory) as performance doesn't change after a 300MHz speed bump. 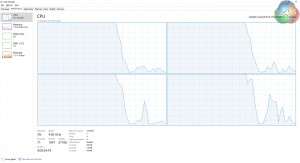 And if you want a visual interpretation of why an i7 could be a valid purchasing decision for The Witcher 3, this is it. The above screenshot shows the CPU load of a 4.9GHz Kaby Lake 4-thread Core i5-7600K. Ignoring the later ends of the chart where the game was closed, it is easy to see that the CPU is pinned at 100% load while running the game.

If you plan to stream over Twitch or do anything else in the background while running this game with an i5, you are likely to experience lower frame rate as CPU resources are reallocated away from the game. With that said, it is unlikely that Core i5 buyers will be using a £1100 Titan X Pascal graphics card capable of almost 200 FPS.

But given the rate at which GPU performance is increasing, combined with the number of years many people will retain their CPU, it is not unreasonable to envisage such a scenario in the near future.

Kaby Lake (the i7-7700K, specifically) is about as fast as it gets for gaming thanks to its use of the excellent Skylake microarchitecture and the optimised process technology's allowance for higher clock speeds. The Core i5-7600K also puts in a very strong showing overall but there are scenarios where the 4-thread chip simply cannot keep pace when running at very high frame rates.

If you are in the market for a high-performance gaming system, the quad-core Core i7-7700K is a better choice than the 6-core Core i7-6800K. The former is generally faster thanks to its higher clock speeds and that frequency boost, in addition to newer microarchitecture, is more than able to offset the lower core count against the Broadwell-E chip.

Plus, there's a decent platform cost saving to be had when opting for Z270 and Kaby Lake which can then be reinvested into a faster graphics card and even better gaming performance.