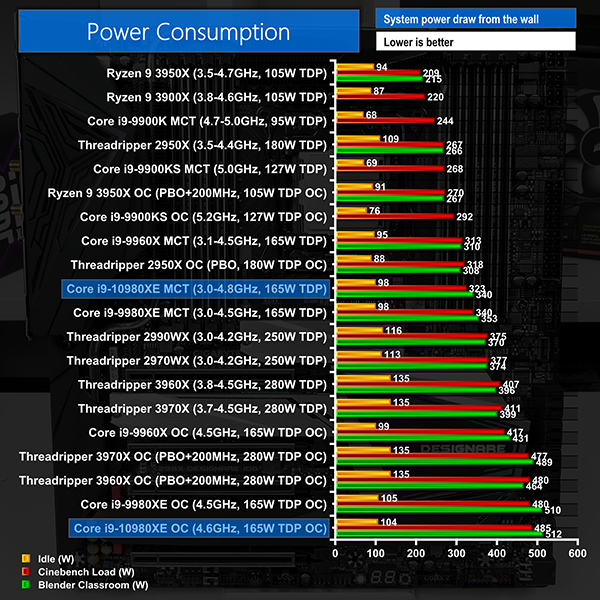 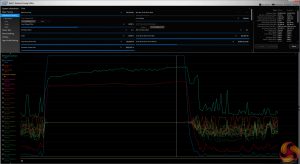 System-wide power draw from the wall was 323 Watts in Cinebench R20, which represents a 17W reduction versus the older but similarly quick Core i9-9980XE. Extended Blender runs pushed the consumption numbers a little higher as the chip and motherboard VRM started to heat up. We regularly saw software-reported CPU package power readings of 220W.

The Ryzen 9 3950X offers similar compute performance in many workloads but demands far less power than the Core i9-10980XE. The competition from AMD’s Zen 2 architecture and TSMC’s 7nm process technology is very tough to contend with. 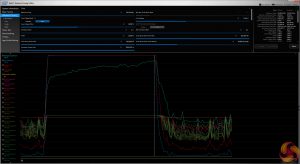 Intel’s frequency headroom can be leveraged well to push the Core i9-10980XE to 4.6GHz. But that comes at significant cost to the power consumption numbers. Now, the 36-thread Core i9-10980XE commands more power than the 64-thread Threadripper 3970X when loaded.

Just over half-a-kilowatt from the wall when rendering for extended periods in Blender is a hefty power consumption figure and pushes the strong motherboard VRM on our Gigabyte X299X Designare 10G motherboard and the 12V rail on our efficient Seasonic Prime Titanium 1000W PSU. 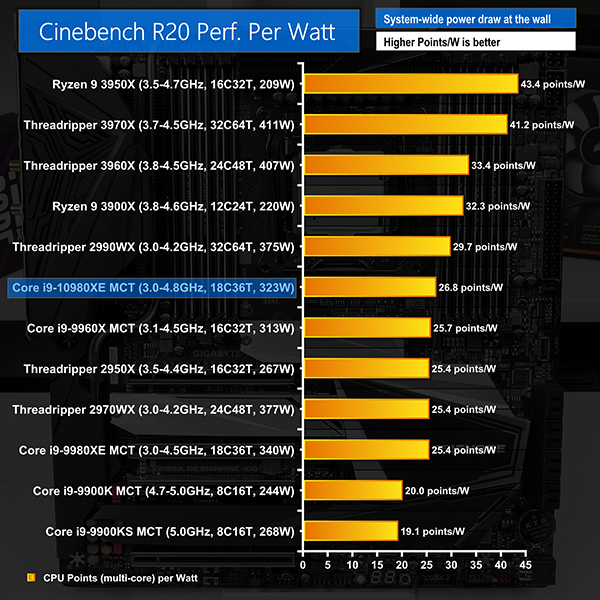 Unsurprisingly, the 10980XE cannot compete with 7nm-based Zen 2 parts for performance per Watt in Cinebench rendering. The Ryzen 9 3950X offers significantly better energy efficiency even though its performance level is similar to the flagship Core i9.

This chart only focusses on stock-clocked test data, as settings for overclocks can vary so heavily. If you’re interested in overclocked numbers, you can take the Cinebench R20 nT scores we have shown and divide them by the reported power consumption numbers for our overclocked settings. 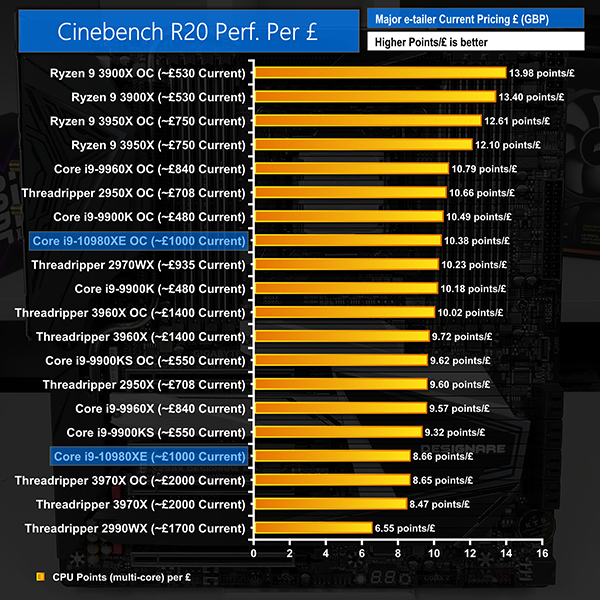 It doesn’t take a genius to work out that a $979 processor probably isn’t going to score particularly highly in Cinebench performance per £. Intel’s Core i9-10980XE is close to Threadripper 3970X value at stock, though the Intel chip even manages to leapfrog the 24-core 3960X competitor when the i9 is overclocked to 4.6GHz. That’s not a bad result at all. Well, until you look at the Ryzen 9 numbers, that is.

Threadripper 2970WX also offers decent value in this chart by offering higher performance than the 10980XE out of the box while currently costing a little less. But that’s specific to workloads where the Threadripper chip doesn’t suffer do to its memory system.

As a note, HEDT chips will rarely outperform mainstream alternatives in this chart as the value-added features such as extra PCIe lanes and quad-channel memory don’t contribute to higher scores in Cinebench R20 but they certainly command a price premium from Intel and AMD.

Temperature recordings were taken using a Corsair H100X 240mm AIO with 2435 RPM SP120L fans. Ambient temperatures were around 24°C. We do not yet have full data for our new Blender Classroom reading for all comparison CPUs. Competing Threadripper CPUs with the asterisk in the chart were tested with a Cooler Master Wraith Ripper TR4 cooler. 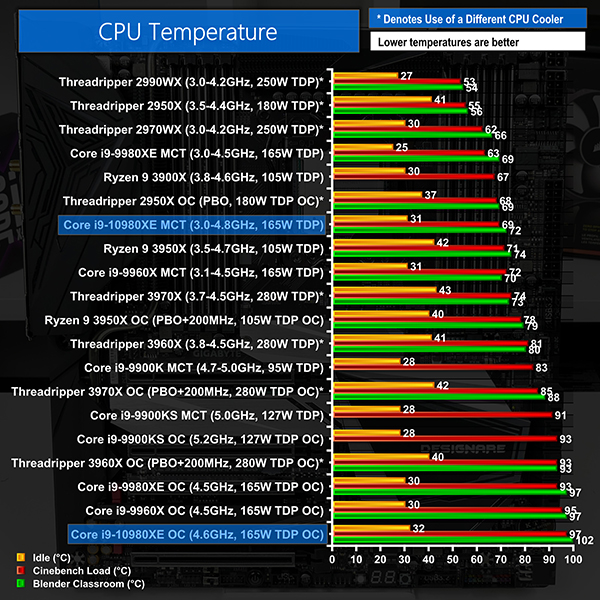 AVX-induced speed reductions at stock help the Core i9-10980XE curb its temperatures to reasonable levels under our 240mm Corsair AIO. The physically large heatspreader and soldered interface certainly helps a decent cooler flush heat away from the i9-10980XE CPU.

Quite frankly, you could get away with even lesser cooling whilst still maintaining preferential Turbo Boost clocks as the Intel algorithm works differently to AMD’s Precision Boost 2 on Ryzen and doesn’t really penalise for higher temperatures, up to a reasonable level, that is. 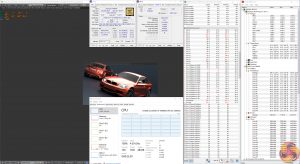 Overclocking is where temperatures start to hit high figures when you’re chasing for lofty frequency goals. We regularly saw a 100°C package temperature in our testing, though the individual cores did tend to stay a little lower and away from the important TJmax number. We were happy with the stability that the chip showed with our overclocked settings, even if 100°C is somewhat concerning to see.

You certainly need to invest in good cooling if you want to overclock Intel’s 18-core brute, but at least you’re obtaining strong frequency gains for your CPU cooling investment.