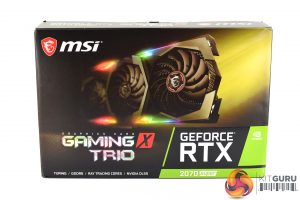 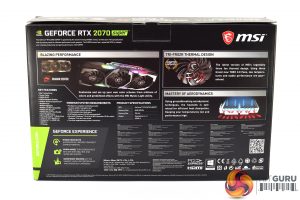 The MSI RTX 2070 SUPER Gaming X Trio ships in a fairly colourful box, though I am not too sure about the yellow-ish section on the right hand side – it looks quite unappealing…

The back is more subdued, though, with MSI using it to highlight some key features of the card. 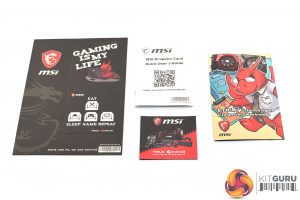 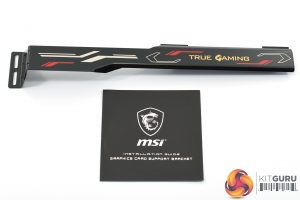 As for the included bundle, MSI is as generous as ever. We find a quick start guide, Lucky the Dragon cartoon, two disposable coasters and a MSI product portfolio leaflet.

More practical is the included GPU support bracket. This is designed to be screwed into the two PCIe slots underneath the card itself, and prevent any unwanted ‘GPU sag’. A short installation guide is also included. 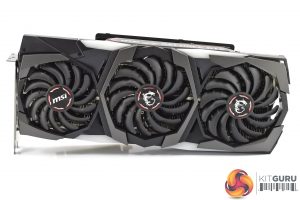 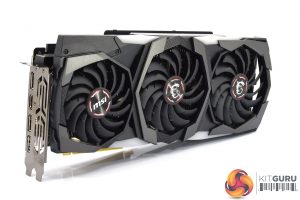 Moving onto the card itself, the overall design language is certainly familiar. I’ve not reviewed the RTX 2080 Gaming X Trio, but I am almost certain this is the same cooler – it makes sense for MSI to re-use an existing design, considering both RTX 2080 and 2070 SUPER use the same physical GPU.

This means we have a black and gunmetal grey shroud, and while it is made from plastic it feels reasonably sturdy. Most of the front of the card is given over to those three fans, however, and it’s interesting that two of these fans measure 100mm while the fan nearest the I/O bracket measures 90mm. All three are MSI’s Torx 3.0 designs, however, designed to maximise airflow down onto the heatsink below. 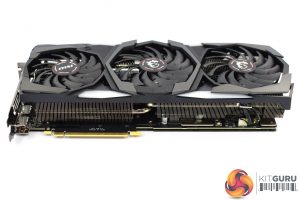 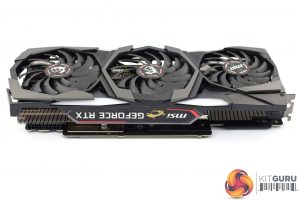 As you may have guessed given a support bracket comes in the box, the Gaming X Trio is a big card. It measures 328 x 140 x 56.5mm, so it is effectively a triple-slot card coming in over 30cm long. It also weighs more than 1.5KG, so definitely not one for the faint of heart. 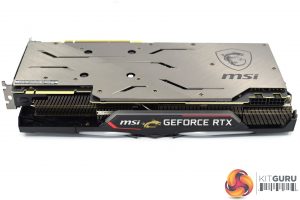 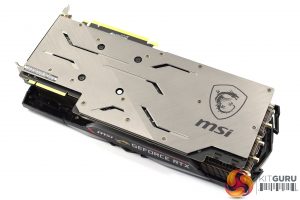 The front of the card is home to the MSI and GeForce RTX logos, while a LED strip also runs above this section of the shroud, and that is configurable using MSI’s Mystic Light software.

It’s the backplate I like most, though, as it is a lovely brushed metal design. The metal is brushed in two different directions too, and this creates a beautiful two-tone effect depending on how the light hits the card. It’s a very stylish design. 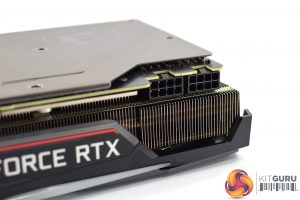 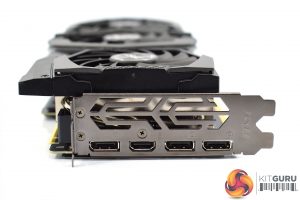 Other things to note include MSI’s decision to increase the power connectors – the card requires 2x 8-pins instead of 1x 8-pin and 1x 6-pin.

Lastly, display outputs consist of 3x DisplayPort and 1x HDMI, but curiously there is no USB-C connector as per the Founders Edition. 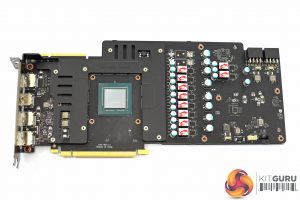 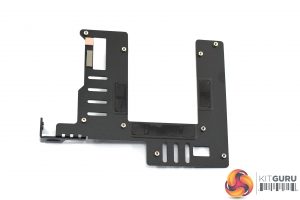 Disassembling the card gives us access to the PCB, but you will notice there is a separate metal plate sitting around the GPU. We’ve seen these before, and it is designed to act as a heatsink for the VRAM chips while also increasing overall rigidity of the card. This is screwed into the backplate and the I/O bracket. 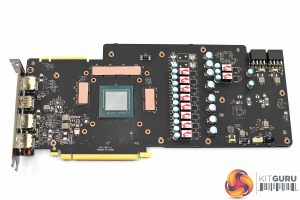 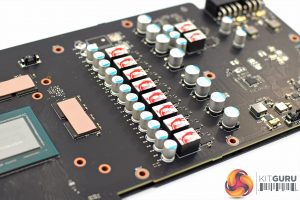 Once that is removed, we get a look at MSI’s custom PCB for the Gaming X Trio. Again, I can’t be certain but this is more than likely to be the same PCB as the 2080 Gaming X Trio, but with a slight adjustment to the power delivery – with MSI opting for an 8+2 phase configuration rather than 10+2 from the 2080 version of this card. 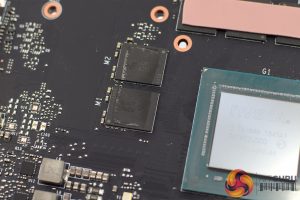 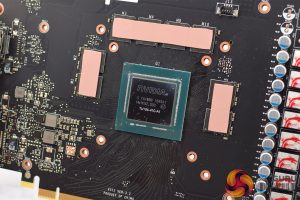 The memory chips – 8x1GB – are from Micron, labelled ‘9EA77D9WCW’. Lastly, while this is a TU104 GPU, the ‘TU104-410’ labelling is something new – given that chips are no longer binned into ‘A’ and ‘non-A’ stacks, the 410 signifier denote this is a new, standard GPU that came after Nvidia stopped splitting its chips. 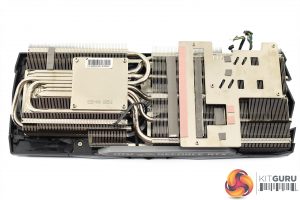 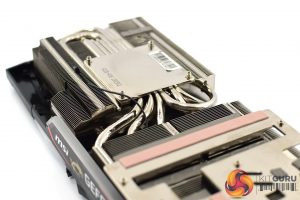 As for the heatsink, this is a very hefty unit split into two separate fin stacks. These are connected by 7 nickel-plated heatpipes, with one of which measures 8mm while the others are 6mm. The GPU die contacts with one coldplate, while there is another coldplate for the VRM as well.