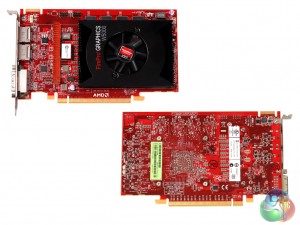 The AMD FirePro W5000 is the baby of the test. Costing under £400 and not requiring any extra power connectivity, thanks to its 75W maximum draw, this is a card aimed at situations where merely decent performance is required.

The 768 Stream Processors running at 825MHz and 2GB of 3.2GHz GDDR5 memory are significantly behind other members of the range, but should still give this card enough grunt to handle most professional 3D tasks.

It’s not aimed at intensive modelling, but supplies plenty for the pound and Watt. This is the only FirePro to still include a DVI connection, although it also has a pair of DisplayPorts, so you can drive up to three monitors at once. 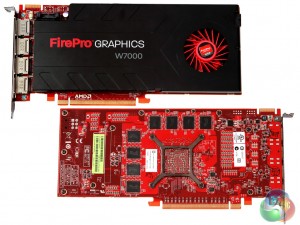 The AMD FirePro W7000 is the mainstream member of the range. It costs 50 per cent more and requires twice the power of the W5000. But it also offers 1,280 Stream Processors running at 950MHz, and 4GB of faster 4.8GHz memory.

The sub-£600 price is still very affordable, though, making this a potential sweet spot between power and cost, and explains why it is a popular choice for everyday workstations.

The card we don’t have from the range is the W8000, which is essentially a higher-end alternative to the W7000, with more stream processors and faster memory, but still the same 4GB allocation. Both cards have four DisplayPort connections, supporting up to four monitors and resolutions up to 4K on each. 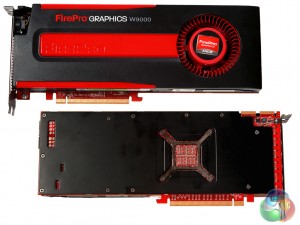 We were sent AMD’s FirePro W9000. The £2,800 price and 6GB memory make this a card aimed primarily at tasks requiring huge texture sets.

The 2,048 Stream Processors running at 975MHz make it significantly more powerful than other FirePros, and its 5.5GHz memory is faster than all but the W8000 too. But it consumes 274W at full pelt, and hence requires both six-pin and eight-pin power connections.

It also isn’t as fast as the four W7000s or two W8000s you could get for the same money, so this is very much a specialist card. It also has a rather specialised six Mini DisplayPort connections, and supports up to six 4K monitors, for a truly huge visualisation wall, although Mini DisplayPort is not as robust as the regular variety, and will require adapters or special cables for most screens. 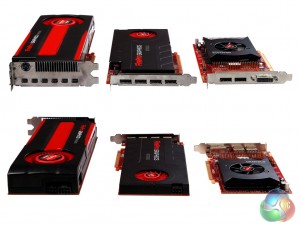