The tests were performed in a controlled room with temperatures maintained at a constant 25°C – a comfortable summer environment for the majority of people reading this. Idle temperatures were measured after sitting at the desktop for 15 minutes. Gaming measurements were acquired by repeating the GTA V benchmark for 15 minutes and taking the stabilised reading. All fan settings were left on automatic. 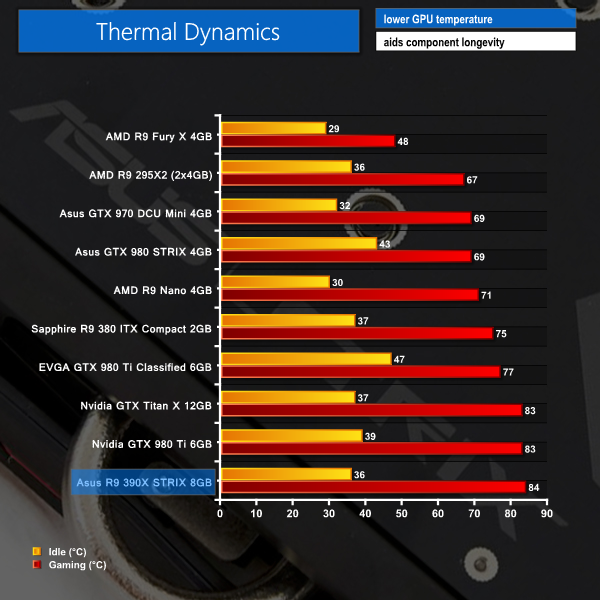 The former Hawaii XT (now Grenada XT) core is known for its high operating temperatures from the R9 290X days. Even Asus’ sizable triple-fan DirectCU III cooler has a tough job taming the hot core while also maintaining sensible fan speeds. 84°C under gaming load is fine for everyday usage, although it is higher than I would personally like to see for a card of this performance level (the 83°C Titan X and GTX 980 Ti are significantly faster). A simple way of reducing operating temperatures is by setting a custom fan speed curve in third party software.

Asus’ fan speed operating dynamics are varied and generally smart. Under low load the fans remain switched off to minimise noise output (as well as dust build-up and mechanical fatigue of the fans). When load is applied all fins spin, needless to say. But when that load is removed and the temperature starts to fall towards the 60C mark, Asus disables the two outermost fans and leaves the central fan as the only unit driving GPU core temperature down.

This is smart because Asus manages to minimise noise output once the load is removed and the most relevant fan (the central one) has been chosen as the single unit that stays operating.

Below 60C, all of the fans go back into their disabled state. This is a little less smart because it means that a very long times passes before the GPU core temperature returns back to its typical idle levels (such is the exponential nature of heat transfer). The heat is left soaking in the now passive fin array and has very little helping it dissipate away from the card. I would have preferred an algorithm that understands load has been applied and keeps the single fan operational for a little longer to drive down the GPU temperature. 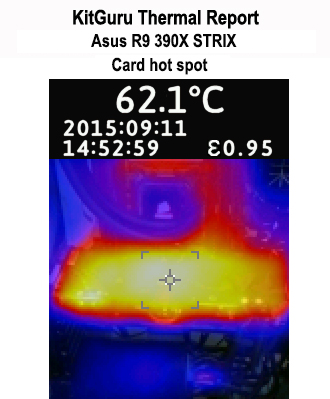 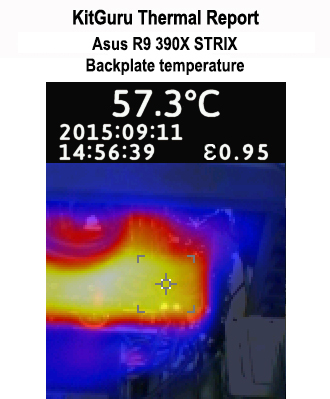 Asus’ backplate design is excellent. The sheet of metal actively spreads heat away from the GPU core area and is effective in transferring it to all areas of the backplate in order to enhance cooling performance. A hot spot of around 62C should be no cause for concern.