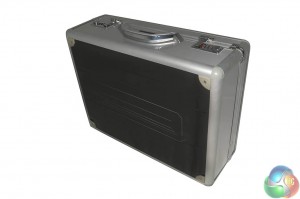 The AMD R9 295 X2 arrives in a sexy silver flight case with AMD branded stickers and side panels. 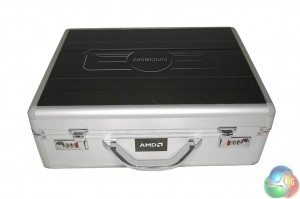 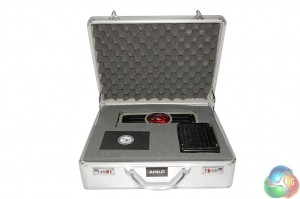 Inside, the graphics card, radiator and hoses are all protected within hand cut, deep foam on all sides. You may think that this flight case is just a presentation idea for launch review websites such as KitGuru, but AMD told us that the end user should be getting the same thing when they buy from their local etailer. 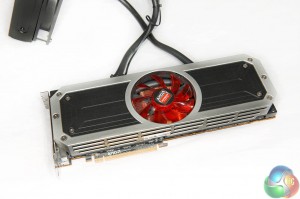 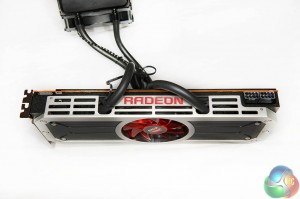 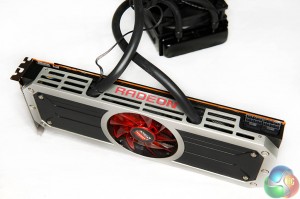 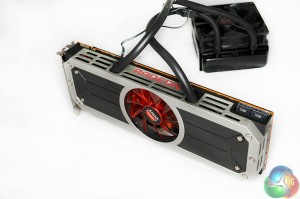 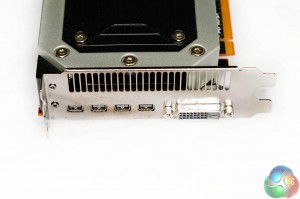 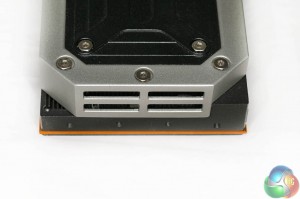 The AMD R9 295 X2 measures 307mm, so you will need plenty of space to install. If you are using a small chassis with limited space, time to upgrade.

The AMD R9 295 X2 doesn’t look quite like any previous graphics card we have seen released by the company in the past. The silver and black cooler actually reminded us a little of the XFX coolers on their previous generation cards. There is a light behind the ‘RADEON’ logo. When the card is powered on this creates a red glow through the clear red fan and lettering. There is a picture of this later in the review.

The two hoses emerge from the top of the cooler, shown above. The hoses measure 380mm from exit point on the R9 295 X2 to the radiator. 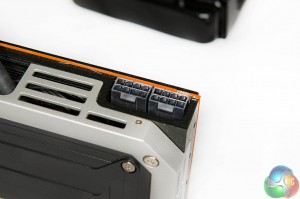 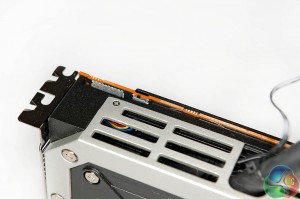 There are two eight pin PCI e connectors on the card. As mentioned on the last page the power supply must have two 8 Pin PCIe power connectors that can each supply 28A of dedicated current.

There is a dual bios switch on the other side of the PCB, which contains a backup of the default configuration. 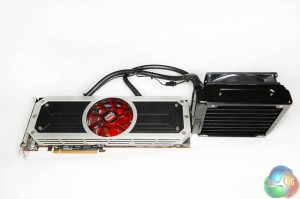 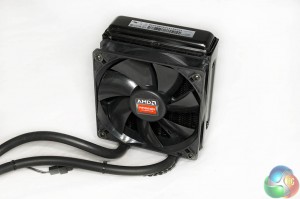 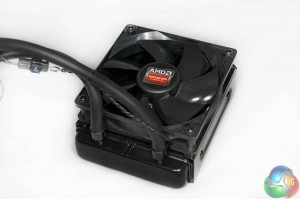 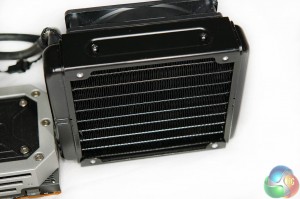 The joint designed Asetek AMD R9 295 X2 liquid cooler features a 120mm radiator, measuring 38mm deep without the fan (64mm with). I have to admit I was slightly surprised to see AMD hadn’t installed two fans to help drive more cool air through the radiator in a push-pull configuration. That said, it is quite straightforward to add another fan to the radiator – just check they are working together, not against. 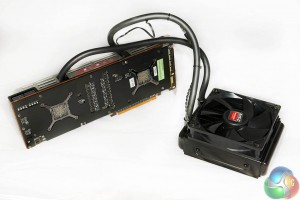 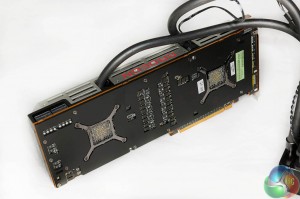 The rear of the card houses a metal backplate to protect the PCB, and to enhance cooling performance. Both GPU cooling mounts are visible. 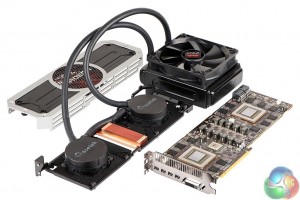 The two images above show the R9 295 X2 ‘layers’ – with the cooler removed in various sections. The memory and VRM’s are cooled by a copper heatsink with the fan pushing air directly overhead, and the dual Asetek blocks are installed over the GPU cores on either side of the PCB. The pumps are integrated into the cooling heads. 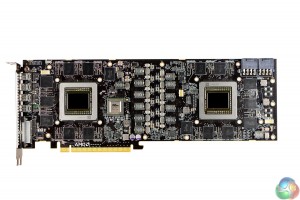 AMD are using 8GB of SKHynix memory on the card, split into two 4GB GDDR5 sections on either side of the card. AMD have adopted a PLX bridge chip for the operation of the R9 295 X2. 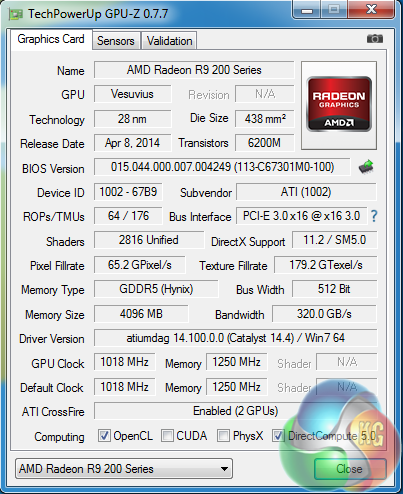 AMD supplied a new driver specifically for use with the AMD R9 295 X2 graphics card. Catalyst 14.4 Beta dated March 28th was used in this review.

Special thanks goes out to Wizzard (Michael) over at Techpowerup for his help in supplying us directly with an early version of his excellent GPUz tool last week with full support for the R9 295 X2.