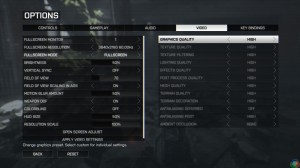 We test at Ultra HD 4K with the HIGH Image preset.

The AMD R9 295 X2 scores at the top of the chart, averaging between 80 and 82 frames per second. MANTLE rendering scored a little higher than the Direct X rendering mode.