Battlefield 4 (also known as BF4) is a first-person shooter video game developed by EA Digital Illusions CE (DICE) and published by Electronic Arts. The game is a sequel to 2011′s Battlefield 3. Battlefield 4 is built on the new Frostbite 3 engine. The new Frostbite engine enables more realistic environments with higher resolution textures and particle effects. A new “networked water” system is also being introduced, allowing all players in the game to see the same wave at the same time. Tessellation has also been overhauled. 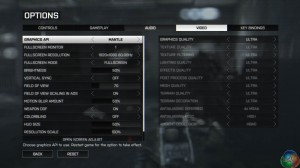 We test the Sapphire R7 265 in both ‘Direct X’ and ‘Mantle’ modes and compare against the new GTX750 Ti cards and the Gigabyte GTX650Ti. We are using the latest patch as of 12th February 2014.

The reference GTX750 Ti struggles to maintain smooth frame rates at this resolution, although the substantial overclock on the Palit GTX750 Ti StormX Dual means the card is much smoother throughout.