We were sent a bare board in a brown box, so we’ve skipped talking about the bundle and headed straight to the board itself. 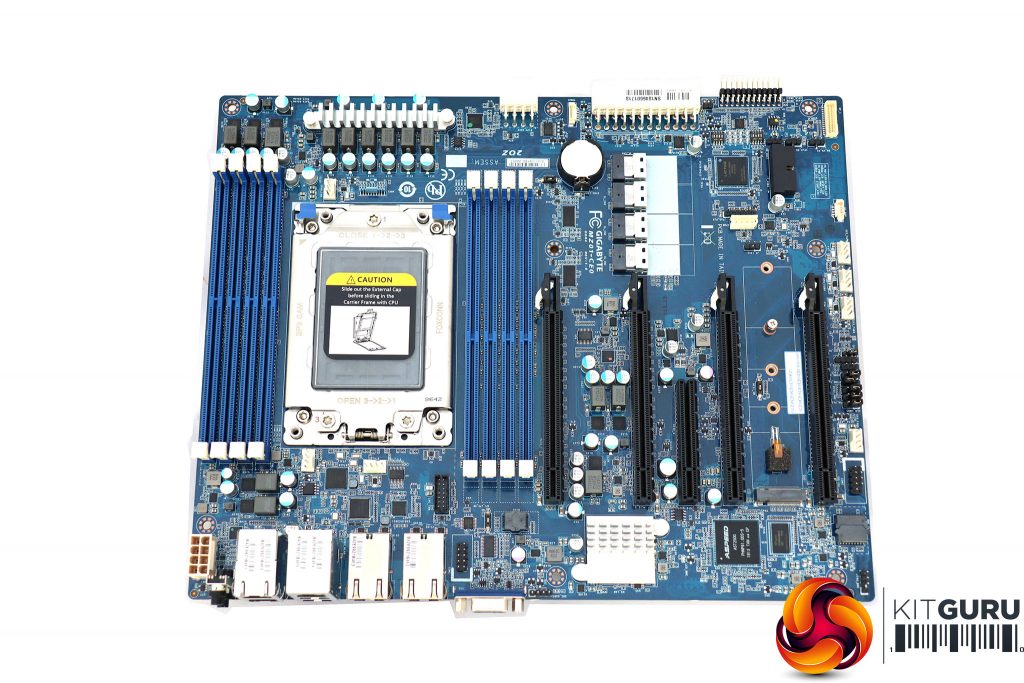 This is a standard ATX-sized board, albeit absolutely crammed full of slots and connectors. The eight RAM slots and huge Socket SP3 really dominate their half of the board. 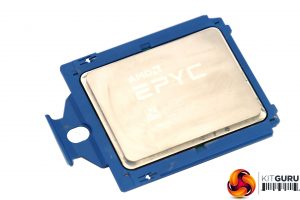 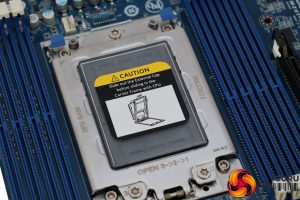 The board supports a single 14nm AMD EPYC 7000 series processor, with up to 32 cores, 64 threads and a TDP up to 180W. We were sent an EPYC 7551P for this review. There’s a version without the P that is quite a bit more expensive and aimed at dual-socket configurations, but otherwise has virtually the same characteristics. 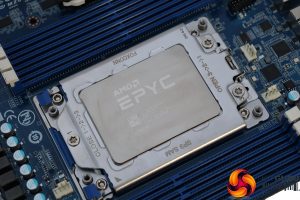 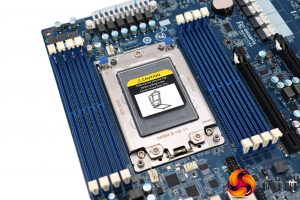 It would be quite easy to think that Socket SP3 is the same as Socket TR4. It looks the same, and you have the same trio of screws to undo before you can slide the CPU into its little frame, after which you screw them in again to secure, but in the opposite order to when you’re opening the socket.

The eight DIMM slots sit four on each side of the CPU socket. These support DDR4 RDIMMs up to 64GB and LRDIMMs up to 128GB, which seems a bit small for a server-oriented motherboard. The maximum frequency is 2,666MHz, and you will want to populate all of them to take advantage of the eight-channel memory controller. So you will probably want to go for the maximum from the word go, as upgrading will require replacement of the entire complement. 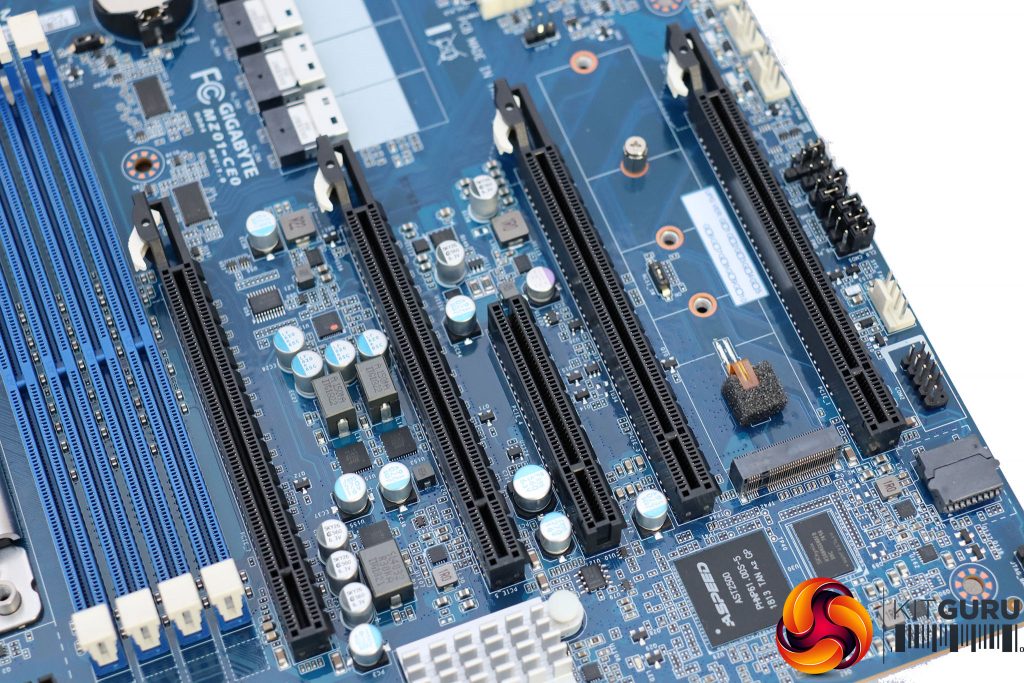 Although Threadripper seemed well endowed with 64 PCI Express lanes, EPYC goes even further, offering 128 PCI Express lanes. This gives a clear-advantage with GPU compute configurations on a motherboard like the MZ01-CE0, because it can offer four PCI Express x16 slots that all operate at the full x16, alongside a PCI Express x8 slot that can operate at x8, and PCI Express Gen3 x4 NVMe. 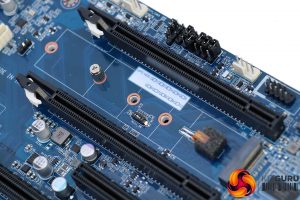 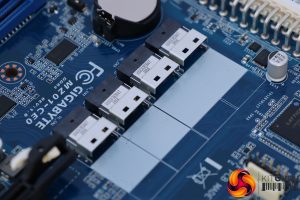 There is only a single M.2 slot, for a boot drive SSD, but you also get the four SlimSAS connectors. You can’t hook up a SATA hard disk to one of these directly, however. Instead, you will need to get hold of breakout cables, although one routing a SlimSAS to four SATA III 6Gb/sec connections is only about £15.

Each of the four SlimSAS ports supports up to four SATA drives, so you could have 16 drives in total. Given that SATA hard disks have already reached 14TB each, you could create a 224TB storage monster with this motherboard – assuming you could find a chassis with 16 bays for 3.5in hard drives. 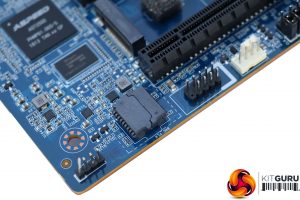 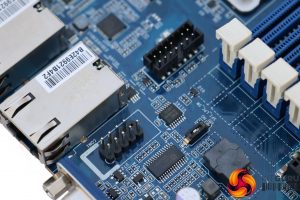 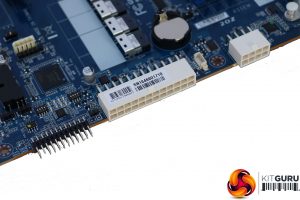 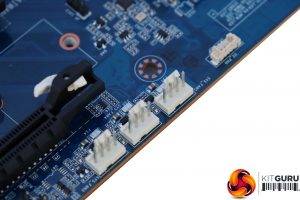 The motherboard is peppered with additional connectors. There are six system fan headers, a USB 3.0 header, two serial COM port headers, one for a TPM (although this isn’t installed as standard), a HDD backplane board header, PMBus and IPMB management connectors. 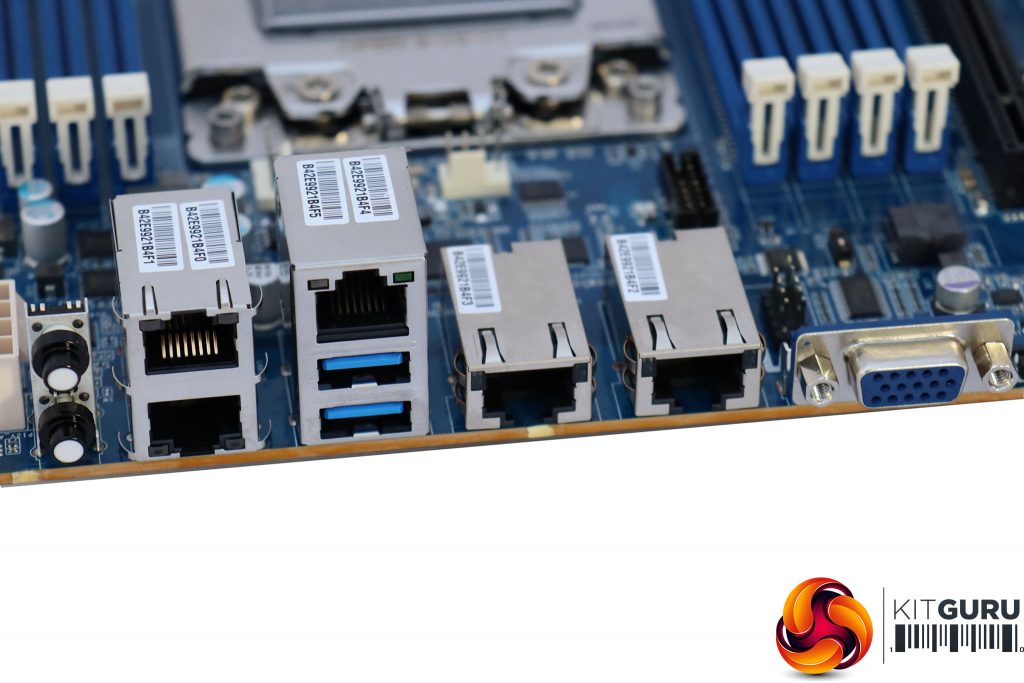 However, the backplane itself doesn’t have much connectivity, apart from the plethora of Ethernet ports. One of these LAN ports is dedicated to remote management, above two USB 3.0 ports, with two Gigabit Ethernet ports to the left and two 10Gigabit Ethernet ports on the right. Furthest right is a VGA video output, driven by the ASPEED AST2500 chipset. On the far left are power and reset buttons.

Overall, this board is primarily aimed at server rather than workstation users, and could do particularly well in a Hyper-Converged Infrastructure environment where you need loads of cores and local storage in one box. The hefty networking provisions would lend themselves well to this usage scenario as well.