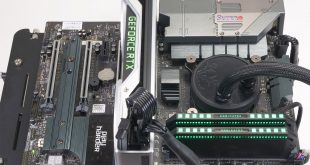 On paper this C9Z390-PGW has a fair amount going in its favour. SuperO offers a small selection of four Z390 motherboards and this particular model sits at the top of the stack with support for multiple graphics cards and a high powered 9th Gen desktop CPU.

Before we dive into the details, it is worth pointing out the ‘PG’ part of the model code stands for Pro Gaming yet most of the features seem to be derived from the workstation side of Supermicro’s portfolio. For starters you get a Broadcom PLX chip that supplies 32 lanes of PCI Express to the four graphics slots, however there is no support for SLI. When you turn to the I/O panel you will see a 10Gb Aquantia Ethernet adapter sitting alongside an Intel Gigabit port, which is a feature that screams ‘Workstation’ at the top of its voice. You will also find two DisplayPort connectors and one HDMI output which seems like a curious choice on a gaming motherboard. Don’t gamers typically use a graphics card?

Perhaps the most curious thing is that SuperO states this motherboard supports a TDP of 140W where its other Z390 models support a ‘mere’ 120W. You will note the Intel Core i9-9900K has a TDP of 95W (although it draws considerably more power under load) so we can be sure that SuperO has given serious consideration to power delivery with the C9Z390-PGW.

We were encouraged by that thought as we began our testing however things did not go smoothly. As you will see we spent a large part of our video talking about power delivery as the behaviour of the BIOS is quirky to say the least. It took a fair amount of work to get the SuperO to work at stock clock speeds while overclocking was a real uphill struggle.