The PCB is not as ‘bling’ as gaming motherboards have become these days, but it’s not sober and boring, either, with blue heat sinks lifting the appearance, although professional users probably won’t care much about this. 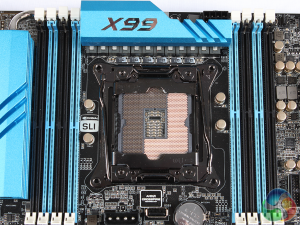 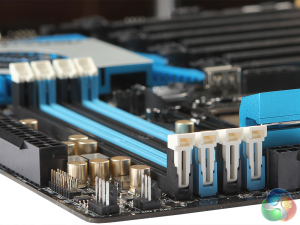 The LGA2011-3 CPU socket is surrounded by four DDR4 DIMM slots on each side, for a total of eight. Populating these with 16GB modules would give you the maximum of 128GB (and require a second mortgage on your house). 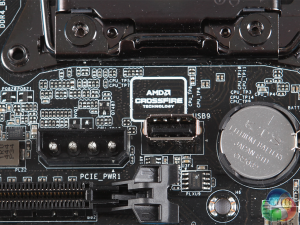 Adjacent is a standard four-pin power connector for adding extra input when lots of graphics cards are installed, and an internal USB port for a Disk on Module (DOM). A Clear CMOS jumper is found here too. 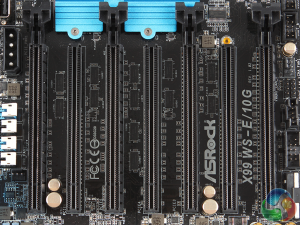 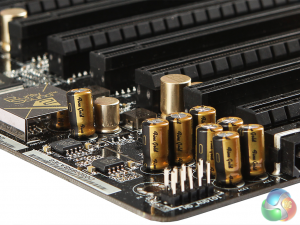 The seven PCI Express x16 slots dominate the lower half of the motherboard, and there are no other types of PCI Express or PCI slots included. There’s another four-pin power connector for the PCI Express at the bottom. Populating all of the PCI Express slots with power-hungry cards won’t be very sensible from an airflow and temperature point of view, but there should be sufficient power to drive them all.

ASRock has alternated these slots between 16 and 8 lanes, with four of the former and three of the latter. The SLI bridges are designed to fit with the spacing of the 16-lane slots. 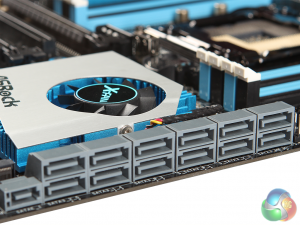 A princely total of 12 SATA ports are available on one edge of the board, with two on one end adjacent to the host port that allows them to become SATA Express. But there’s only one of these. Ten of the SATA ports come from the Intel chispet, and two from the Marvell one. Nearby is the M.2 header, with the usual screw pillar (and included screw) to secure it. In the bottom corner is a SATA DOM connector. So your storage options are myriad. 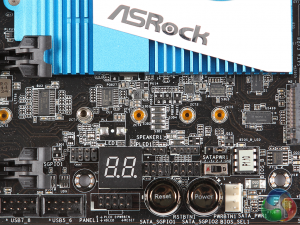 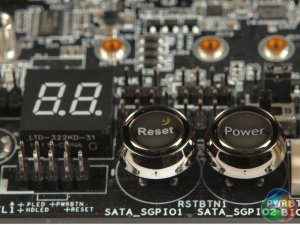 The built-in buttons for power and reset are high quality, and definitely handy when you’re testing a build (or reviewing a motherboard!). There’s a switch for choosing between two BIOSes, which is a great safety feature. If one BIOS gets corrupted, you can simply switch to the other, backup BIOS and copy that back to the primary chip.

So you should never have your motherboard killed by a corrupted BIOS. Another hugely useful feature when setting things up is the Dr Debug two-digit LED readout, which provides descriptive error codes that can be used to figure out exactly what is causing the system not to start. 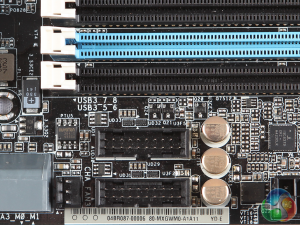 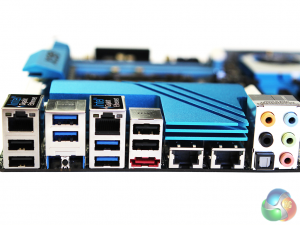 Next are the most exciting inclusions – the two 10Gbit Ethernet ports. Using Intel’s Teaming software, all four network ports can be grouped together in parallel for huge bandwidth – assuming your networking infrastructure can support this. Finally, there’s the usual six audio ports, including five minijacks and optical S/PDIF. One thing missing here is USB 3.1 of any form, but you’re more than catered for when it comes to networking.