ASRock maintains the same UEFI design that we have seen from its motherboards dating back to X370 and older. This is not a bad thing as ASRock’s implementation is clear, well laid out, and has enough features for most users. 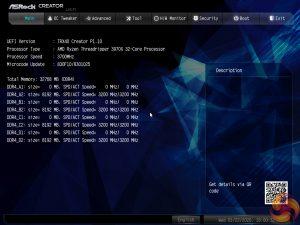 The Main page for ASRock’s UEFI outlines primary information relating to the system and motherboard.

We noticed that ASRock does not include an Easy Mode section on the BIOS version that we tested with. This is disappointing given the separate section’s ability to present less-experienced BIOS-dwellers with simple options that are unlikely to cause instability.

The OC Tweaker section is good in terms of the options and granularity the user has to tune their hardware. The voltage number input seems to be using a switch to red text when voltage levels that are high and risky have been entered. ASRock’s system for allowing a user to manage loadline calibration is very good as the options are clearly displayed using a graph.

Five save profiles is perhaps cutting it a little fine for enthusiasts. However, there is the ability to transfer the profiles via USB. We also noticed that the saved settings stayed in place following a BIOS update, which is handy.

Plenty of memory-related settings are available, including dividers for extremely high frequencies.

Settings more closely tied to the AMD CPU operation are found within the Advanced section. Settings such as CCD and core operations can be adjusted. There is also access to the Precision Boost Overdrive settings.

The Tools section holds a number of handy utilities such as Instant Flash for updating the UEFI (including via the internet). 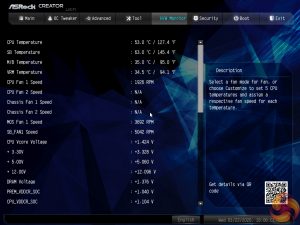 The fan options are plentiful with a variety of fan speed profiles but only CPU and motherboard temperature reading options. A user can set a well-tuned fan speed curve simply by opting for numerical inputs. 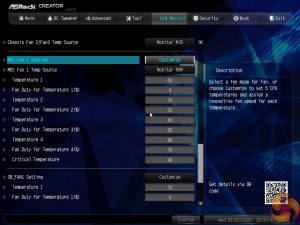 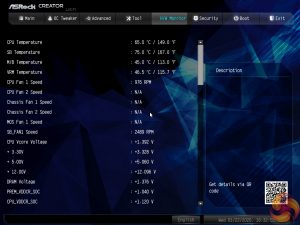 It is good to see included presets for the chipset and MOSFET fan and the same granular level of controllability. This is especially true because the presets provided by ASRock are very poorly tuned but quick user interpretation can adjust this to one’s preference, including 0 RPM fan modes.

ASRock’s primary OS software offering is Polychrome Sync RGB. This tool allows users to control RGB lighting through their motherboard and it worked well in our testing. There are options for different lighting modes, colours, and speeds.

Unfortunately, however, there are no modes that I would consider ‘smart’ such as a colour gradient based on CPU temperature or system CPU load.

A-Tuning is the other key piece of software that ASRock offers. This tool is primarily centred around controlling system operations such as fan speed and displaying information such as frequencies, temperatures, and voltages.

Unfortunately, the FAN-Tastic Tuning section did not work in our testing with the TRX40 Creator. We expect its abilities to be the same as what we have seen from other ASRock motherboards whereby fan speeds can be configured visually using a multi-point curve.