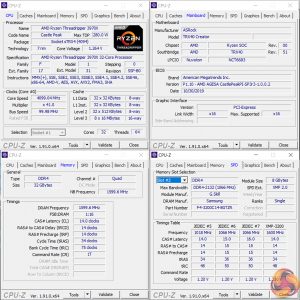 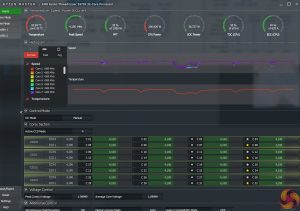 We were able to hit a stable frequency of 4100MHz using a load voltage of 1.264V according to CPU-Z and HWinfo. This used a BIOS-set core voltage of 1.25V and Level 1 load-line calibration (LLC).

ASRock’s LLC settings within the UEFI are clearly visualised via a graph. We were happy with the steady state offset of plus 14mV delivered by the Level 1 LLC setting.

4100MHz at 1.25V BIOS-set voltage is a solid result and is comparable to what we achieved on competing motherboards at this price point. Higher frequency is likely achievable via higher voltage, but this will require a particularly high-end CPU cooling configuration to stay below 100°C. 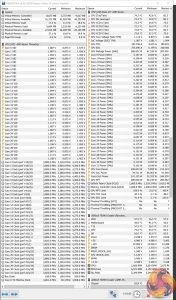 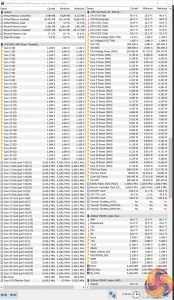 ASRock includes onboard temperature sensors which include a VRM reading. This is good to see on a motherboard of this calibre and it gave us confidence that the MOSFET temperatures were in check throughout our testing.

Importantly, the VRM temperature sensor reading looks to be accurate based on numbers from our manual testing equipment. This is a positive as it allows users to fine-tune the MOSFET fan curve precisely, knowing that the temperatures displayed are indeed close to the real component operating temperature.

As a note, CPU package power data readings look to be accurate at stock speeds. However, as we have seen for other TRX40 motherboards, overclocking the CPU manually throws these numbers out into vastly inaccurate territory. 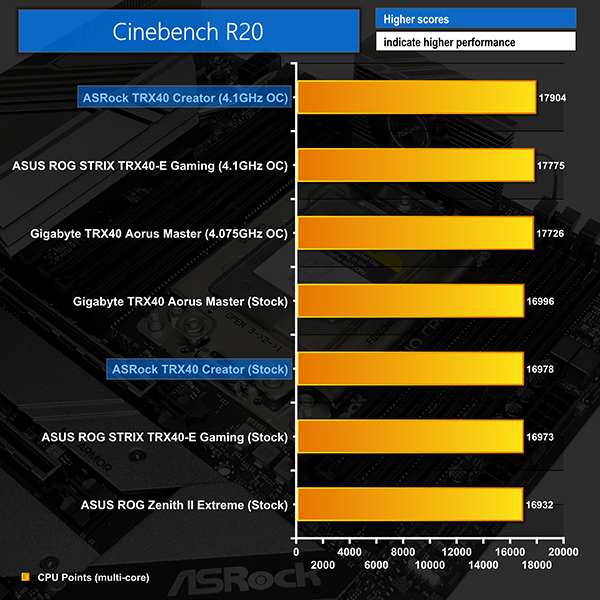 Cinebench R20 scoring is boosted by just under 1000 points, or 5.5%, when the system is overclocked to 4.1GHz CPU frequency. As is the case for Ryzen 3000, a manual 4.1GHz clock speed is lower than the 4.5GHz maximum Precision Boost 2 frequency and therefore lightly threaded workloads will suffer. 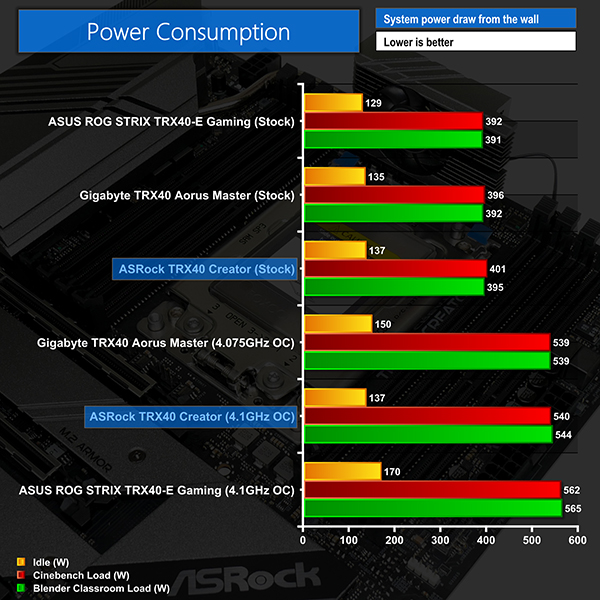 ASRock applies reasonable voltages and that delivers sensible stock speed power numbers. The TRX40 Creator consistently drew a little more energy than its competitors, but the differences were no cause for concern from an energy efficiency or power delivery standpoint.

Overclocking load draw numbers were slightly lower than ASUS’ offering thanks to preferential target voltage accuracy from ASRock’s board. This is because ASUS uses a different CPU VCore sensor reading methodology.

Just under 550W system wide power draw, most of which is going to the CPU, is an extremely high level that demands solid cooling and a strong power supply like the Seasonic Prime TX-1000 that we used. 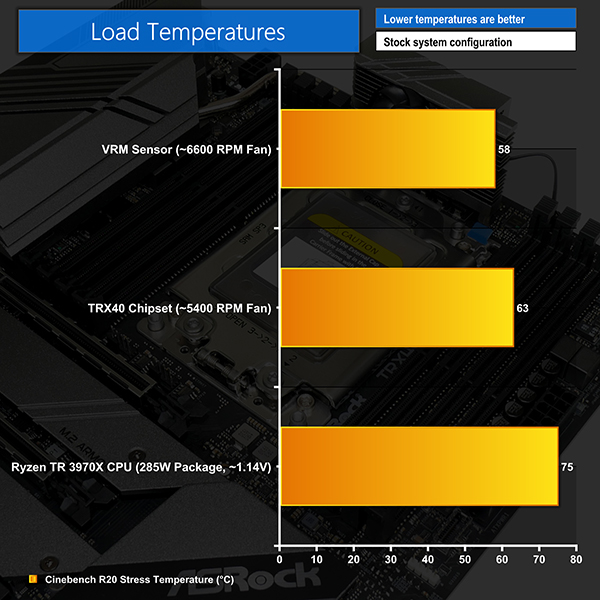 ASRock delivers solid VRM temperature numbers but this is thanks in large to the high fan speeds of its default curves. While the ASUS TRX40-E competitor’s VRM solution stayed below 60°C without the heatsink’s fan even kicking in, the ASRock board’s MOSFET fan was whizzing around at 6600 RPM for our 58°C result.

That’s unimpressive for a stock-clocked system as the fan was audible and irritating. The same comments are true for the chipset cooling solution and its 5400 RPM fan reading for a 63°C temperature result.

Overclocking the system did not cause any problems for the VRM heatsink as the fan simply ramped up even higher and managed to keep the MOSFETs below 70°C in our testing. Whether the software-reported fan speed readings are correct or not is somewhat irrelevant; I would not be happy with the noise output level from the VRM and chipset fans with the system loaded.

Thankfully, ASRock’s UEFI and OS software allow for granular control over both fans, including setting a zero RPM operating point. This worked reasonably well in our testing, provided you’re happy to see your chipset temperatures lingering above 70°C most of the time.

The compressed footprint of the TRX40 Creator’s eight-phase power delivery solution looks to be perfectly fine from a power delivery perspective, but it clearly presents a cooling challenge that ASRock feels is solved by using a small, loud fan.