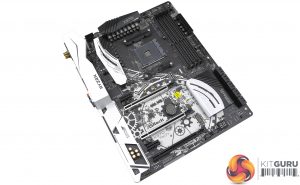 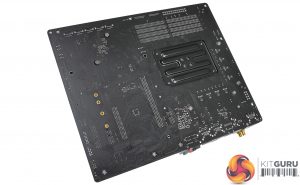 ASRock gives the X370 Taichi the unique black and white colour scheme and interesting styling patterns that have been seen on previous Taichi motherboards. The design seems to have been well-received in the past. It is, however, more difficult to match with surrounding components than an understated black or grey monochrome appearance.

Sizing follows the standard ATX form factor that is plenty of space for X370 offerings. Both main full-length PCIe slots feature steel reinforcement to aid GPU stability. PCIe lane distribution can be interpreted by looking at the rear of the board’s PCB.

There is very little in the way of RGB LED lighting on the X370 Taichi – only a small section around the chipset heatsink is dimly illuminated. This seems to be a conscious decision by ASRock but it is not one that I think is sensible. For a high-end motherboard targeting users who will care about appearance, it would be better to include a decent RGB LED system onboard. This gives users the option to tweak it as they desire, or switch it off if preferred. 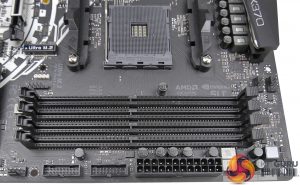 ASRock quotes support for DDR4 frequencies above 3200MHz via overclocking. The inclusion of a functional XMP setting in the UEFI made it easy for our G.SKILL kit to reach its 3200MHz rated frequency. Memory looks to be a 2-phase design and is managed by a uPI Semi. uP1674p PWM controller which drives two Texas Instruments 87350 NexFET MOSFET power blocks and two R30-marked alloy chokes.

Close to the DIMM slots is the 24-pin power connector and a pair of internal 5Gbps USB 3.0 headers. All four of the supported 5Gbps USB 3.0 lanes are delivered by the X370 chipset.

There is no internal 10Gbps USB 3.1 Gen 2 connection of any sort, which is highly disappointing given that competitors are providing the new interface. 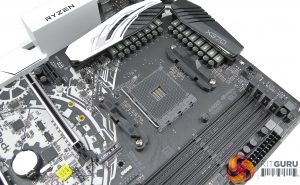 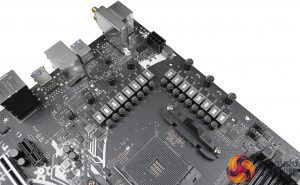 As well as an ICS clock generator for adjustment capabilities, sixteen power delivery phases are outfitted on the X370 Taichi. This behemoth system is split as twelve phases for the CPU and four for SOC duties.

For its X370 Taichi (and its X370 Professional Gaming, which uses the same design), ASRock has delivered the strongest power delivery system found on any AM4 motherboard. At around £230, this motherboard’s power delivery system makes a laughing stock of the inferior design for MSI’s significantly more expensive X370 XPower Gaming Titanium. ASUS’ solution on the Crosshair VI Hero is similar to ASRock’s but uses fewer phases of comparable quality. Gigabyte’s design on its high-end Aorus X370 motherboards is inferior to that of ASRock’s system, though it is still a potent solution with high-quality components. 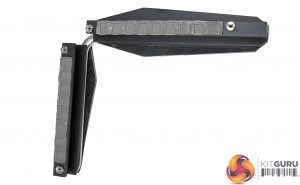 Cooling the power delivery MOSFETs is a sizeable heatsink that connects two metal blocks via a heatpipe. I have no complaints with this cooling method as the high phase count of ASRock’s power delivery system will mean that heat is spread over a larger MOSFET area and is therefore easier to extract. 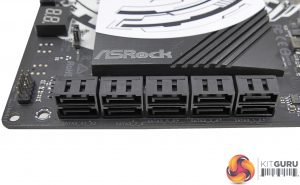 Ten right-angled SATA 6Gbps ports are found on the X370 Taichi. ASRock takes the eight natively provided by the X370 chipset and adds an additional two by means of a PCIe 2.0 x1 ASMedia ASM1061 chipset. Those ASMedia-powered ports will be bandwidth-limited to around 500MBps for both, so should be reserved for use with slower mechanical storage once the X370 ports have been used.

There’s no SATA-Express on this motherboard which is not an issue. However, when combined with the fact that there is also a lack of internal 10Gbps USB 3.1 Gen 2 connectivity, the lack of SATA-E (which was good for front panel 10Gbps USB 3.1 Gen 2 boxes) is a little more annoying. Still, nothing that can be considered more than a very minor annoyance.

The omission of a 32Gbps U.2 port is disappointing, given this board’s ability to tempt power users who may value an ultra-high speed SSD such as the Intel 750. This point is especially relevant with the positioning of the 32Gbps PCIe 3.0 x4 M.2 connector that will make the cable from an M.2-to-U.2 adapter visible and ugly. 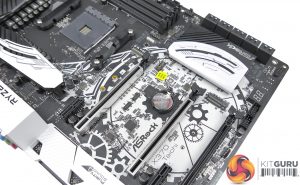 Two M.2 slots are provided with the X370 Taichi. Only one of these slots (the upper one) is marketed as ASRock’s Ultra M.2 connector. That means it can house a 32Gbps PCIe 3.0 x4 NVMe SSD or a SATA 6Gbps drive, thanks to connectivity delivered directly from the AM4 processor.

The lower M.2 slot is fed by four PCIe Gen 2 lanes from the X370 chipset making it compatible with PCIe SSDs at a transfer rate up to 20Gbps (less than 2GBps minus overheads). This slot is good for using a supplementary, lower-speed M.2 SSD or one based on older technology, such as the very popular PCIe 2.0 x2 Plextor M6e.

Both slots are ‘only’ capable of house 80mm-long drives, which I personally do not see as an issue as market forces have dictated the M.2 2280 (80mm-long) form factor to be the industry standard on desktop. The upper slot sits above the GPU-filled PCIe x16 slot and just below the CPU socket. This position is likely to aid its ability to keep temperatures lower by not being hit directly with warm air from the GPU and receiving incidental airflow from an air CPU cooler’s fan. It will, however, make an ugly green PCB visible in a manner that could destroy system aesthetics.

A lack of active cooling for an M.2 SSD is a disappointing aspect of ASRock’s motherboard and is an area where MSI and ASUS seem to be making far more effort on their products. 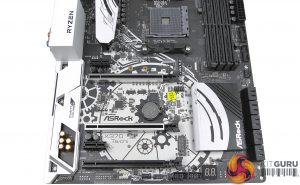 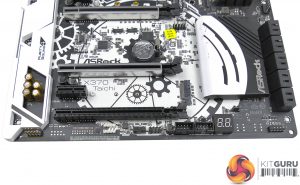 Sixteen PCIe Gen 3 lanes from the AM4 processor are split as x16/x0 and x8/x8 for the two primary, steel-reinforced full-length slots. This gives the X370 Taichi compatibility with two-card CrossFire and SLI.

A further two PCIe 2.0 x1 slots are provided for added expansion capability. These slots receive their individual PCIe 2.0 x1 lanes through an ASMedia ASM1184e PCIe lane switch, meaning that a latency penalty and bandwidth restriction is likely to be imposed at some level and in certain scenarios. That’s not really an issue if you install a sound card or additional WiFi adapter but it is something to consider if using a high-bandwidth PCIe x1 device such as a video capture card.

Slot spacing is typical for modern ATX motherboards. There’s space between the primary full-length PCIe connectors for 2- and 2.5-slot graphics coolers, whilst still maintaining a cooling gap. You don’t have to remove a graphics card to access the Ultra M.2 connector, either, which is a positive.

Along the bottom edge, we see the usual combination of ports and headers. ASRock positions two 4-pin RGB headers here, giving users a very healthy total of three RGB headers throughout the entire motherboard. The two-digit debug LED is good to see but a complete lack of onboard power or reset buttons is disappointing from a troubleshooting standpoint. 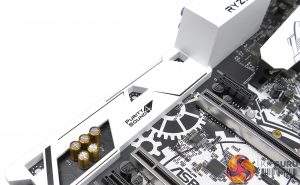 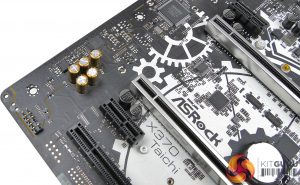 ASRock’s Purity Sound 4 audio system is based around the popular Realtek ALC1220 codec. A Texas Instruments NE5532 amplifier is used alongside Nicihon Fine Gold audio capacitors. Interference reduction is handled by segregated PCB tracks but there is no codec shielding other than the plastic board cover. 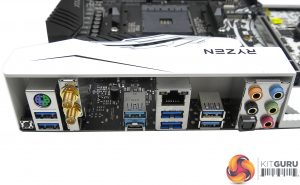 10Gbps USB 3.1 Gen 2 in Type-A and Type-C form is delivered by the native X370 chipset connections, which previous testing of ours has shown to be very fast solutions. ASMedia’s ASM1543 handles the Type-C logic to make the physical Type-C connection available. ASRock does not add any 10Gbps USB 3.1 Gen 2 connections beyond the pair provided natively by AMD’s X370 chipset, which is a little disappointing for a £230 product.

Networking connectivity is provided by an Intel I211-AT GbE NIC and Intel’s dual band Wireless-AC 3168 PCIe adapter. The 3168 WiFi+BT4.2 card is mounted in M.2 form out-of-the-box and is a relatively slow single-stream 802.11ac adapter that can only operate at transfer rates of up to 433Mbps. Nevertheless, it’s fast enough to saturate even the fastest common UK fibre internet connections (200Mbps through Virgin Media) so is likely to suffice for users without heavy internal netwok transfer needs. 2.4GHz and 5GHz connectivity is possible.

Both networking chipsets receive their PCIe 2.0 x1 links behind the ASM1184e lane splitter, which may present bandwidth and latency issues if both are heavily used alongside the two PCIe 2.0 x1 physical slots.

Audio ports are the typical affair and I am pleased to see the inclusion of a rear-mounted clear CMOS button which is extremely useful when overclocking. There’s some free space for a video output such as DisplayPort or HDMI. However, it is highly unlikely that consumers purchasing this motherboard will partner it with an AM4-based APU. 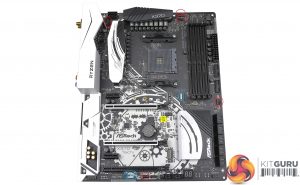 Five 4-pin fan headers are spread around the motherboard with three to four being accessible from the CPU socket area. I like ASRock’s decision to allocate two headers for CPU fan control, rather than one. Nuvoton’s NCT6779D-R is responsible for overall operation of the fan control system.

Three 4-pin RGB headers are included on the X370 Taichi. Two of these sit on the motherboard’s bottom edge, while a third is located very close to the CPU socket (alongside a half-height internal USB 2.0 header). ASRock’s decision to place an additional RGB header and internal USB connector near the CPU socket is very smart as this caters well for AMD Wraith RGB users, as well as people with an AIO cooler that needs USB header connectivity.