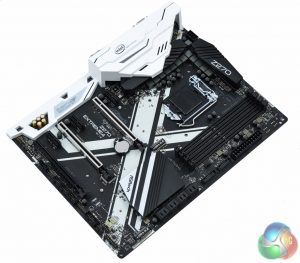 The large white X that cuts through the matte-black PCB is an interesting look that certainly sets the ASRock Z270 Extreme4 apart from many rivals. Overall styling and presentation is sharp and when enhanced with the RGB lighting this ASRock motherboard will suit a wide variety of tastes.

Said RGB lighting is located in a number of areas including the:

There’s also the option to use the optional RGB header which uses the 12v, G, R, B pin-out. LED strips, such as the one we tested from CableMod, will need to be used with a 12v, B, R, G adapter. 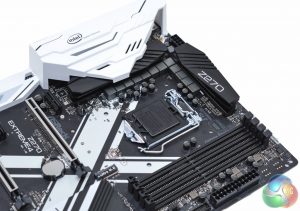 ASRock offers two CPU fan headers around the CPU heatsinks though these are slightly awkward to access when the motherboard is installed in a case. The CPU draws power from an 8 pin EPS connection which is routed through the quoted 10-phase CPU VRM. This is split into 6 phases for the CPU, 4 for the iGPU and 2 more for system controllers.

The VRM is blended with 45A power chokes and Nichicon 12K Black Caps. 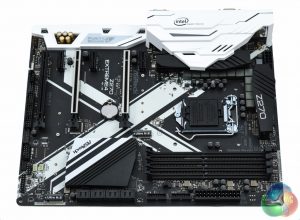 The memory lanes draw power from 2 VRM phases. In the same section of the motherboard you’ll also find the motherboard 24pin, two USB 3.0 headers, a fan header and 8 SATA ports. Unfortunately there are no power, reset or debug utilities in this area of the board.

ASRock provides two M.2 ports, one that aligns with the first PCIe 1X slot and another tucked up next to the PCH heatsink. Both provide up to 32Gb/s through a PCIe 3.0 X4 interface but each M.2 port shares bandwidth with two SATA ports. Populating both M.2 connectors reduces available SATA outputs to 4 ports. U.2 can be achieved through an ASRock adapter but for this price point it is highly unlikely to be used and the fact ASRock has made it an optional extra is agreeable. 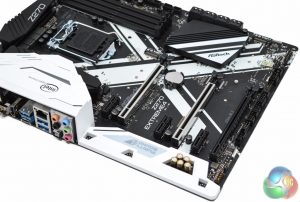 The PCIe lanes are configured to easily facilitate 1- or 2 -way GPU configurations with both CPU-derived PCIe 16X slots having PCIe slot shielding. ASRock places a 1X slot between the first 16X slot and the CPU area to account for larger CPU heatsinks. Unfortunately, any graphics card placed in the first PCIe slot effectively blocks the audio RGB LED.

The audio segment is largely covered up by the plastic shrouding but ASRock has packed in a large amount of audio hardware. This includes the new Realtek ALC1220 codec with a Texas Instruments NE5532 amplifier and Nichicon Fine Gold Series audience capacitors. All connections are gold-plated plus there’s PCB isolation and separate PCB layers for the left and right audio channels.

Rear I/O connectivity is adequate but like the Gigabyte Z270X-Ultra Gaming it could benefit from more USB ports or more up to date display connectivity. ASRock includes one additional display output, a semi-redundant VGA, while the empty shell where a WiFi add-in card would be on higher models gives the illusion the rear I/O is more fleshed out than it actually is. 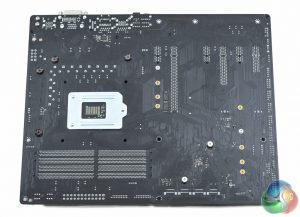 ASRock uses Phillips-head screws all-around for the Z270 Extreme4 which is good for watercooling and general maintenance. The underside view also gives a clearer look at the PCI-Express electrical configuration which is 1X/16X/1X/8X/1X/4X.