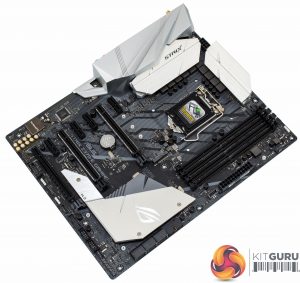 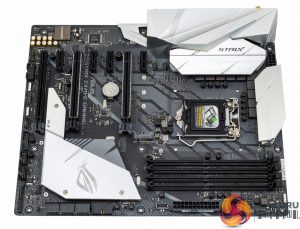 The aesthetic design for the ROG Strix Z370-E Gaming is black with silver-metallic accenting on the heatsinks and rear I/O shield, compare that to the Z270-E which was black and dark-grey. ASUS implements are rather unique shading and hatching effect onto the PCB which is unusual and certainly adds a certain something to the design and presentation. 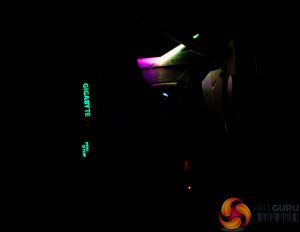 RGB lighting is one of the biggest let downs for a motherboard of this price point. There’s only RGB lighting built into the rear I/O comprised of 4 individually addressable LEDs to allow for rainbow-type effects. ASUS implements two more 12v G R B headers and a 5v header for ample expansion, but we’d liked to have seen more onboard LEDs to begin with. 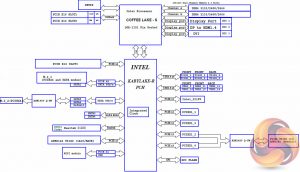 The block diagram varies only slightly between other motherboards in its class. Where it does vary is two of the PCIe 3.0 X1 slots being shared with a front panel USB 3.1 header in an “either/or” scenario. Similarly, there is an M.2/SATA bandwidth sharing system in place which means if you use two PCIe M.2 drives you lose two SATA ports, if you use only 1 PCIe drive then you maintain access to all six SATA ports.

Along the bottom segment you’ll find 12v and 5v RGB headers plus more USB front panel connections. There’s also a “3D Mounting Point” down here which ASUS provides printing templates for. One of the accessories that is printable is an M.2 Fan bracket, for mounting an M.2 fan to cool the M2 in that slot (M2_1).

The template appears to be for a 40mm fan and there’s even a 3/4 pin fan header located nearby labelled “M.2_FAN”. If that idea isn’t to your fancy it can just be used as a system fan header. 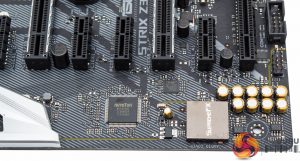 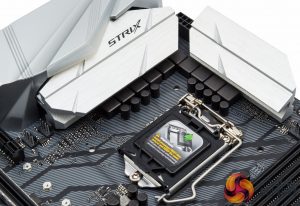 Around the CPU socket are two separate aluminium heatsinks with VRM cooling duties. There’s no copper heat pipes in sight as these are reserved for higher-end SKUs. The CPU power supply is catered for with an 8 pin EPS power input.

The second 12V G R B LED header is located at the top of the board near the memory lanes. ASUS, unlike some motherboard vendors, provides dual CPU fan headers as well as a water pump header to cater for users with dual fan AIO liquid coolers. 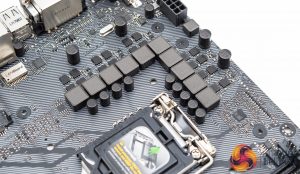 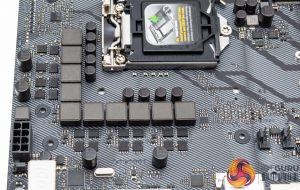 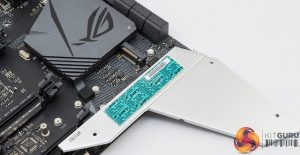 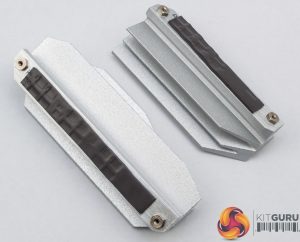 The CPU VRM is cooled by a pair of aluminium heatsinks each with thermal pads. The M.2 drive is cooled by an additional heatsink which screws onto the chipset heatsink and motherboard, also with a thermal pad.

The rear I/O is covered by the following: 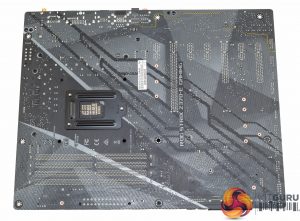 Underneath the motherboard gives a better glimpse at the patterned PCB design. Additionally, all the heatsinks and shrouds are secured with standard cross head screws making for easy maintenance and modification.