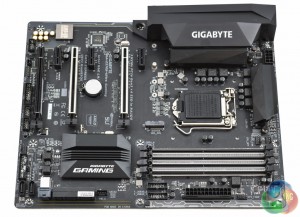 For a low-cost offering the overall design and styling for the Gigabyte Z270X-Ultra Gaming is pleasant and effective in its purpose to appeal to a wide audience. Motherboard vendors seem to adhere to the same wider market trends of which the latest seems to be a neutral colour scheme with RGB lighting.

Gigabyte have opted for a two-tone black and grey which is enhanced by some silver shielding on the memory slots and CPU-derived PCIe 16X slots. RGB lighting is multi-zone and found in a number of locations on this particular motherboard:

Along the bottom of the motherboard are the front panel connections, two front panel USB connections (up to 4 ports), a fan header designated for a system fan or pump, a TPM header, the 12v G R B W LED header and front panel audio.

The fact Gigabyte have designated this SYS_FAN3 fan header for the pump is strange since both other system fan header ports are closer to the CPU socket where the pump is most likely to be located. 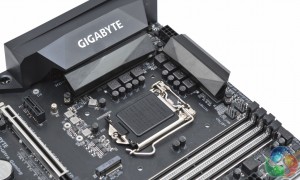 The CPU socket draws power from an 8 pin EPS connection and a 7 phase VRM, with another phase for the DRAM. The number of phases is a little on the low side for the segmentation of this motherboard but will still suffice for most overclocking scenarios. Any motherboards higher than this in Gigabyte’s product stack for Z270 will need to equip more phases.

There are three fan headers near the CPU socket, 2 CPU and 1 SYS. The single M.2 socket for this motherboard is located right below the CPU socket so users of large air heatsinks will likely need to install the M.2 drive prior to the CPU cooler. 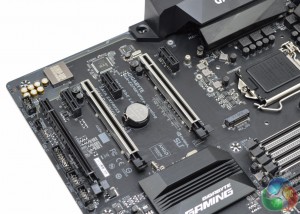 The PCIe lane configuration is virtually identical the ASUS Maximus IX Formula with the same lane spacing and electrical configuration. It’s a decent configuration as it gives the flexibility to run multi-GPU setups and large air coolers won’t be blocked by the first PCIe lane since it is only a X1.

Most users will likely not need additional expansion cards for networking or audio since the onboard solutions are fairly strong already, but Gigabyte does sell an optional Thunderbolt add-in card that would work with this board should the user desire.

The rear I/O seems a bit sparse and could benefit from more USB ports. There are four USB headers to provide front USB ports but few cases have more than 2 USB header cables coming from the front panel. Gigabyte would do well to turn one or two of those headers into additional USB ports on the rear I/O. 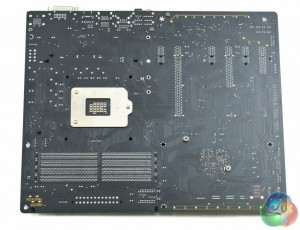 Underneath the motherboard it’s possible to get a glimpse at the assembly method for the main heatsinks and shroud. The PCH heatsink is easily removable by Philips head screw, so too is the I/O shroud, but the CPU VRMs use a fiddly push-pin system.

The LED strip on the underside of the motherboard is visible from this view, it’s formed from 5 individual LEDs. The electrical configuration of the PCIe lanes can be validated from the bottom and it is: 1X, 16X, 1X, 8X, 1X, 4X.