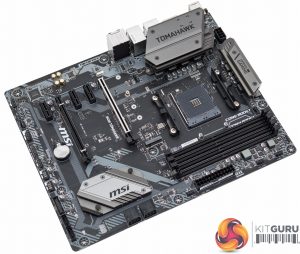 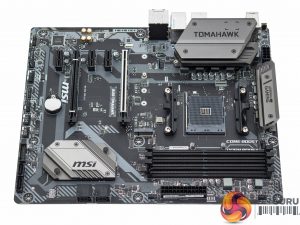 The appearance of the MSI B450 Tomahawk is typically subdued with a black and grey colour scheme that uses industrial-stroke-military patterns for the heatsinks and PCB. It’s a fairly neutral design overall that should appeal to most audiences and it is pleasing to see MSI ditching the chunky plastic shrouds in favour of a larger VRM heatsink with less restriction on airflow. 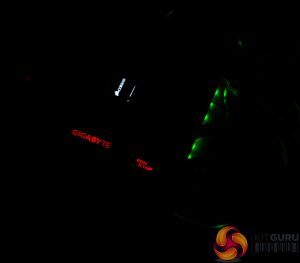 MSI touts RGB LED support but there’s only one integrated lighting zone which is a single LED strip, formed of eight individual LEDs, running under the 24 pin connector. Two optional RGB headers at the top and bottom of the motherboard, in the pin layout 12v G R B, are available to attach additional LED strips to. Each RGB header uses a Texas Instruments TPS25944L IC to provide its 12-volt power and control.

MSI segments the SATA ports into the respective connectivity blocks – the block of four comes from the B450 chipset and the block of two from the AMD CPU. Four debug LEDs (BOOT, VGA, DRAM, CPU) sit next to the motherboard 24 pin and will stay illuminated if any device is preventing the motherboard from “POST-ing” properly.

Three internal USB headers are available at the foot of the motherboard, two USB 2.0 and one USB 3.0, along with the first of the RGB headers.

Audio is catered to by the somewhat ageing Realtek ALC892 codec which is unshielded and paired up with 85 degrees Celsius rated Nippon Chemi-Con audio capacitors, there is no headphone amplifier being used.

The motherboard Super I/O controller is the Nuvoton NCT6797D-M.

The rear I/O is reasonably well balanced with six USB ports spanning all the recent generations (2.0, 3.0, 3.1) & Type-C, a PS/2 combo, a couple of display outputs, Gigabit LAN and six gold-plated audio jacks. Note that there is no digital audio available for this motherboard, only analogue. 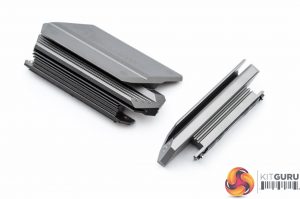 The CPU socket draws power through a single 8-pin EPS connection and near to the CPU socket are three fan headers (CPU, PUMP, SYS).  All fan headers on the motherboard have a Nuvoton 3947SA controller IC.

The VRM heatsinks are reasonable and are entirely aluminium – no copper is used. They should still suffice for the type of APU or CPU most users will deploy into this motherboard. 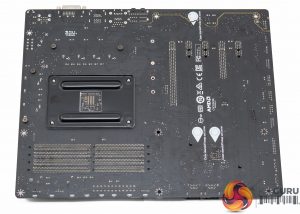 Underneath the motherboard there are cross-head screws for the VRM heatsinks, though the chipset heatsink is on push-pins.

MSI has continued to print on “Case standoff keep out zones” (it also did this on the B360 Gaming Pro Carbon) which are intended to ensure consumers do not place stand-offs in the wrong mounting holes (micro-ATX, mini-ITX) since these can cause problems or even damage the motherboard from the underside. 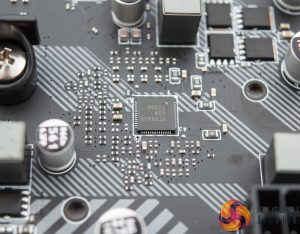 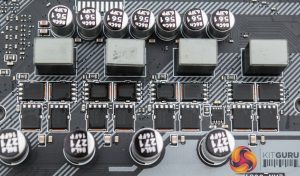 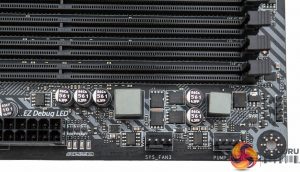 The memory VRM is made up of a number of similar MOSFETs from ON Semiconductor (4C029N and 4C024N) and the Nuvoton 3103S and 3711S could also be involved in some other way – such as voltage or PWM regulation.