The Advanced Host Controller Interface (AHCI) specification used with basically all consumer SSDs (and HDDs) was around long before solid-state storage became popular on the consumer market. It was designed with the operational characteristics of mechanical storage in focus, so is not particularly optimised to take advantage of solid-state storage technologies.

I guess that the racing car analogy can be drawn here. It’s like having a super fast car (the equipment), on a well-built racing track (the interface), and then being limited to lower speeds by a ‘poorly-optimised’ (slow) driver behind the wheel (the protocol/specification). But when you stick Lewis Hamilton – a driver who is ‘designed’ for racing fast cars – behind the wheel, you get far better results.

Your physical equipment (SSD) may be capable of high speeds, and so may the interface (PCIe lanes). But they can be hampered in certain usage scenarios and workloads if the protocol in charge doesn’t allow them to perform at their full potential. NVMe aims to change that by being optimised for application with PCI-fed SSDs.

Primary design points for the NVMe specification are the ability to make use of the low latency operation of non-volatile, non-mechanical storage mediums and the parallelism of modern CPUs.

A reduction in the required CPU cycles is one of the key factors in reducing latency for NVMe. The specification also supports significantly larger data queues as well as methods of improving workload parallelism in order to avoid single-line bottlenecks.

Software, driver, and boot support has been a hurdle for NVMe. An industry consortium has worked to implement enhanced driver support across many operating systems. More relevant to consumers is that Intel and motherboard vendors have been working together to ensure that NVMe devices are seen in the UEFI BIOS and that they can be booted from. 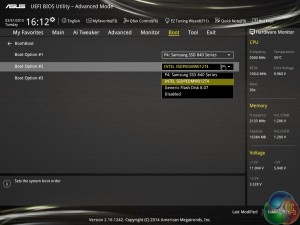 Most X99 and other 9-series motherboards have seen recent BIOS updates that equip them with NVMe drive support. We had no problems using the SSD 750 NVMe drive in our Asus X99 Deluxe motherboard with the latest BIOS.

Intel says that there is nothing to prevent support for older platforms (such as Z87 and X79), other than motherboard vendors not wanting to spend money on ‘dead’ chipsets. It is unlikely that we will see widespread, uncompromising support for PCIe, NVMe devices on older platforms, although there may be some motherboard exceptions that are updated at a vendor’s discretion. 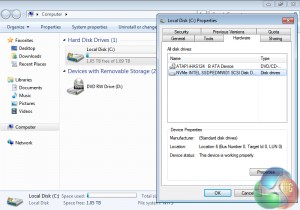 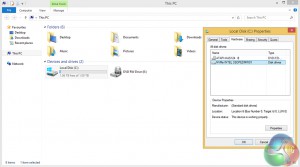 We loaded Windows 7 and Windows 8 to verify boot support. Both operating systems booted and functioned correctly with the SSD 750 drive.

Windows 8 natively includes an NVMe driver (although Intel suggests installing their own driver), however Windows 7 will require you to load the NVMe driver during OS installation. Provided you have a USB flash stick or an optical drive, that is unlikely to be an issue.

NVMe is already active in the professional world, and it is now beginning its journey on the consumer path.