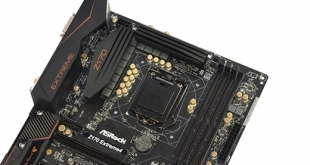 The availability of multiplier-locked Skylake chips has sparked an even greater emphasis on the need for low-cost motherboards to partner with such processors. ASRock’s affordable Z170 Extreme4 utilises the Z170 chipset’s host of worthwhile features but minimises add-on components in order to maintain aggressive pricing. Aside from the Z170 chipset’s rich set of native offerings, a feature that ASRock is coining – ‘Sky OC’ gives users the ability to overclock their multiplier-locked Skylake CPU by simply tweaking the BCLK.

Retailing for a little less than £110, ASRock makes strict decisions as to where corners should be cut in order to give the Z170 Extreme4 its affordable price tag. Native two-card CrossFire and SLI support is maintained, and there’s also an additional full-length PCIe 3.0 slot for high-bandwidth devices such as PCIe SSDs. Keeping the focus on storage offerings, ASRock utilises the Z170 chipset’s native characteristics by offering a trio of SATA-Express ports that can alternatively be used as six SATA 6Gbps connections. There’s also a single ‘Ultra’ M.2 connector which offers support for up to 32Gbps PCIe devices as well as SATA 6Gbps drives.

Other than the exclusion of a set of add-on USB 3.0 and SATA 6Gbps controllers, you may be hard-pushed to see where ASRock has cut costs. Redundancy is offered in the form of two BIOS chips, there are onboard power and reset buttons, the audio solution is of ASRock’s Purity Sound 3 calibre, and 10Gbps USB 3.1 is offered in Type-A and Type-C forms.

Eager to find out if any of ASRock’s strategies for meeting the aggressive pricing goal have affected under-the-hood performance, let’s get started with a thorough analysis of the Z170 Extreme4.