Feedback on our Ryzen 7 reviews highlighted that many users are interested in the performance comparisons between CPUs when partnered with a sensible graphics solution for the given price point. 1440P resolution testing was also shown to be in strong demand.

We have taken that feedback on board and have added test data for the Ryzen 5 and Core i5 Kaby Lake CPUs running with a GTX 1070 8GB Founder’s Edition graphics card and a 1440P gaming resolution. We feel that the GTX 1070 currently hits a strong sweet-spot for graphics performance and cost to many Ryzen 5 buyers and also 1440P gamers.

We run the built-in benchmark using a 2560×1440 resolution and the same settings as the 1080p and 4K tests that can be found on other pages (Ultra quality preset, Async Compute enabled). 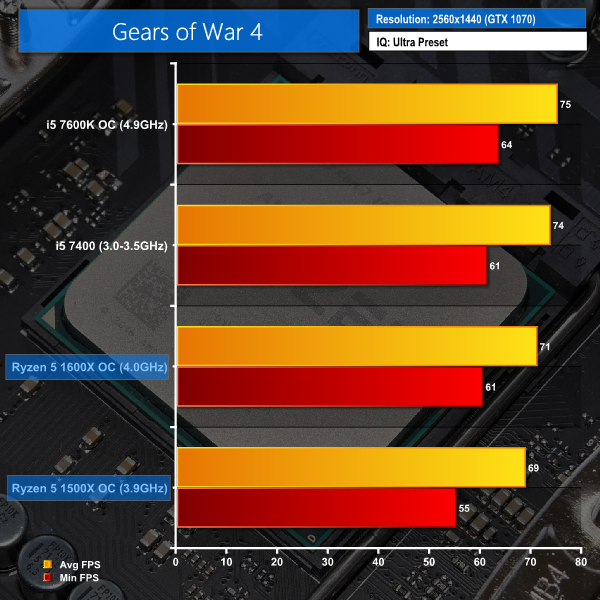 We run the built-in benchmark using a 2560×1440 resolution and the same settings as the 1080p and 4K tests that can be found on other pages (generally Maximum quality settings including Advanced Graphics). VRAM usage at 1440P, according to the built-in GTA V counter, is 3514MB. 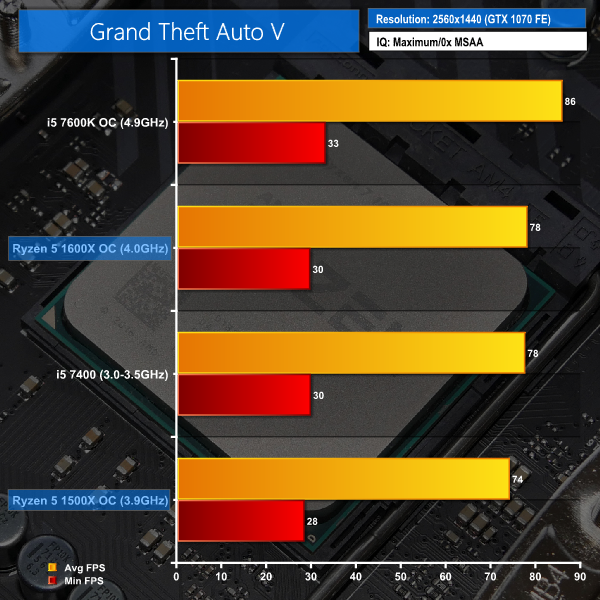 We run our custom 107-second benchmark in a densely-populated town area using a 2560×1440 resolution and the same settings as the 1080p and 4K tests that can be found on other pages (Maximum quality, Nvidia settings disabled). 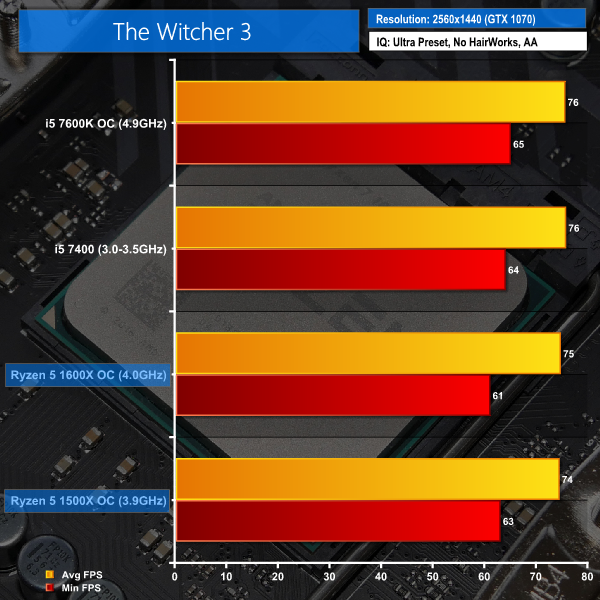 With a sensible graphics card combined with the popular 1440P resolution that many Ryzen 5 gamers will be using, AMD’s six-core chip manages to stay within touching distance of Core i5-7600K performance in Gears of War 4.

GTA V is faster on the i5-7600K thanks to its high clock speed of 4.9GHz. The improvement over Ryzen 5 1600X is 8 FPS (around 10%) on average. The Witcher 3 performance is very similar between the overclocked Ryzen 5 chips and Intel’s competitors.

These results show that Intel’s Core i5-7600K is still the fastest chip for less than £250 from a pure gaming standpoint, even with a sensibly-priced graphics card and 1440P resolution. Ryzen 5 is, however, far more competitive in this test scenario than at 1080P with a significant excess in GPU horsepower.