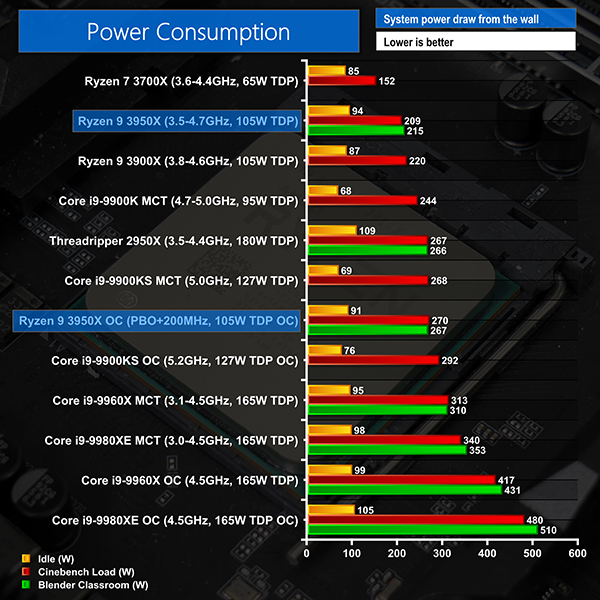 At this stage, we already know that AMD’s Zen 2 architecture and the use of TSMC’s 7nm process technology translate into superb energy efficiency for Ryzen 3000. The Ryzen 9 3950X continues that trend.

As some quick points of comparison, Intel’s 16-core i9-9960X demands over 100W more power at stock, the Core i9-9900K is 35W hungrier, and the Threadripper 2950X guzzles almost 60W extra. None of those processors outperform the 3950X in the associated Cinebench R20 test. 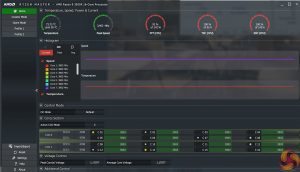 Impressively, the 16-core 3950X actually drew less power in Cinebench than its 12-core 3900X brother. We were surprised by that point, but significant retesting confirmed the findings with our test system. The 3900X takes 100% of the 142W PPT power available to it. The 3950X, however, tends to hover around 90-95% of the maximum value, hence the wall power draw reduction of around 10W. 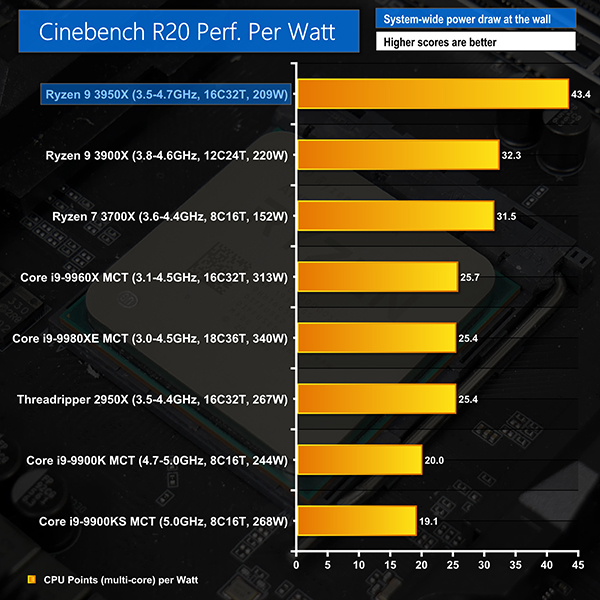 Clearly, clock frequency is the trade-off for the 3950X being able to reduce its power consumption. Nevertheless, you still get the full set of sixteen cores chomping through rendering tasks quickly and efficiently.

Let me re-emphasise that word ‘efficiently’. We had to rescale our chart to fit in the Ryzen 9 3950X’s Cinebench performance per Watt score. The ability of AMD’s Zen 2 architecture to scale efficiently across increasing core counts is remarkable.

Temperature recordings were taken using a 240mm Corsair H100X all-in-one liquid cooler with two SP120L fans running at 2435 RPM. Ambient temperatures were around 24°C. We do not yet have full data for our new Blender Classroom reading for all comparison CPUs. 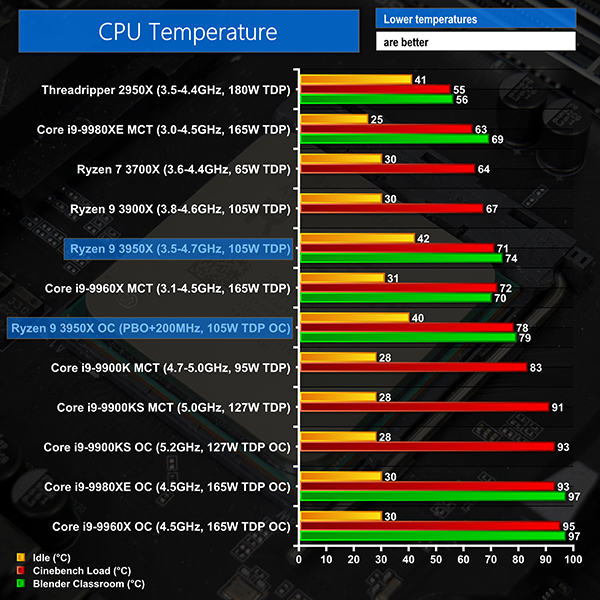 3950X temperatures were fine with our 240mm AIO and high-speed 2435 RPM fans. AMD’s recommendation of a 280mm liquid cooler looks pretty reasonable. Despite the power efficiency of Zen 2, extracting that heat from the miniature 7nm-built chiplets and relatively small heatspreader is not as straightforward as simply reading the power figures would make it seem.

Nevertheless, sub-80C on a high-performance 240mm AIO is perfectly reasonable for such a high-end part. It also gives some additional headroom for manual overclocking attempts if you feel the need.