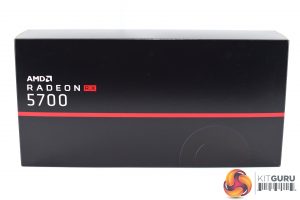 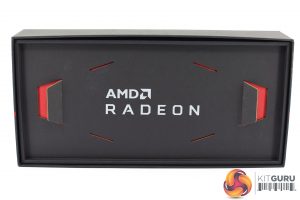 The AMD Radeon RX 5700 ships in a compact black box, with just product branding and a red strip visible on the front.

A smaller box slides out to reveal the AMD Radeon logo printed on a piece of cardboard. This acts a lid – you just need to lift by the pull-tabs to reveal the card housed underneath. 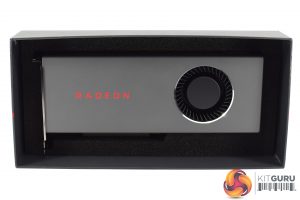 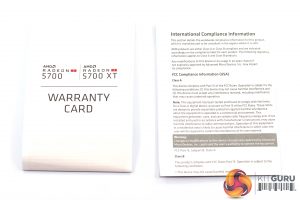 With that done, we get our first look at the card as it sits in a foam surround. Also included is a small warranty card and a leaflet about international compliance information. 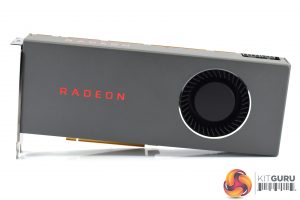 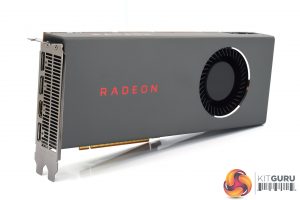 Looking closer at the card, it sports a pretty simple design with an understated grey shroud. The only piece of additional styling comes from the Radeon logo printed in red. It’s not a very complicated design, but the card itself does feel great in the hand thanks to its anodised aluminium shroud. If you look closely, you can see the micro-texture on the card’s surface.

It’s also obvious that this is another of AMD’s blower-style reference cards. I had wondered if we had seen the last of these when Radeon VII launched with its triple axial cooler, but they have made a return here – it will be interesting to look at temperatures and noise levels later in the review, as the Vega 56/64 designs were famously loud and hot-running. 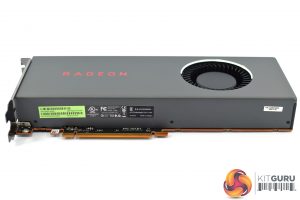 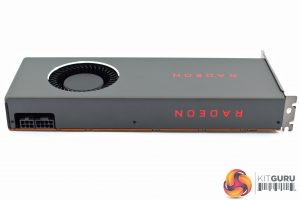 Taking a look at the sides of the card, the grey shroud is clearly very box-like in its design – no curves or ‘dents’ here.

It’s also worth mentioning the dimensions of the card. It’s a standard dual-slot thickness, while my measurements have it 268mm long and 110mm tall. 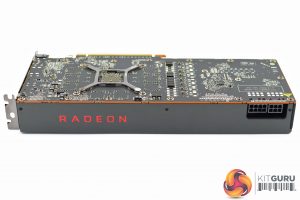 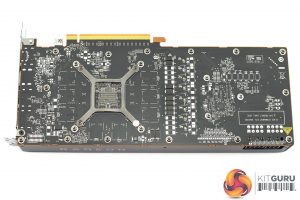 Back to the front side of the card, here we see a second Radeon logo printed in red, though this isn’t illuminated by LEDs so nothing changes once your system is powered on.

As for the backplate… well, there isn’t one, and we instead get a direct look onto the back of the card’s PCB. This isn’t the absolute end of the world, and I appreciate AMD is trying to keep costs down – but this is still a $349 graphics card, and I would expect a backplate at this price. Not only to help with hot spots on the back of the PCB, but also to provide a layer of protection against a potentially leaky AIO cooler, and also I think it looks better from an aesthetic point of view. 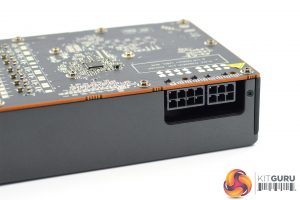 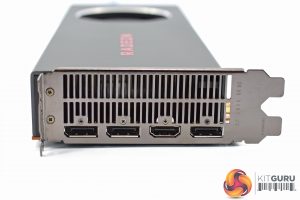 As for the board’s power requirements, you’ll need 1x 8-pin and 1x 6-pin power connectors. For reference, RTX 2060 SUPER only requires 1x 8-pin, but rated board power is just 10W higher for the AMD card.

Lastly, for display outputs there are 3x DisplayPort and 1x HDMI connectors. Most of the I/O bracket is given over to ventilation, where the hot air will be exhausted out the back of the case.