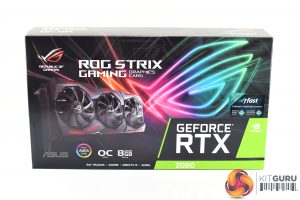 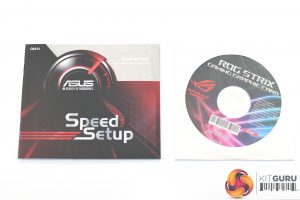 The ASUS ROG RTX 2080 Strix OC ships in a black box with a large multi-colour ROG logo dominating the front. An image of the graphics card itself occupies the left-hand side of the box.

Inside, included accessories are scarce – we find one quick start guide and one driver disk and that is it. 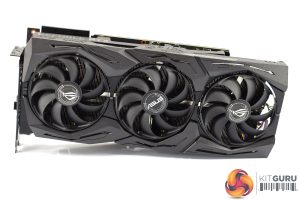 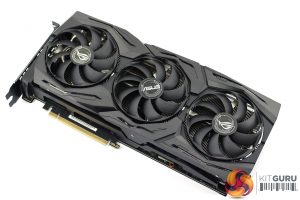 Moving onto the card itself, there’s no denying the overall look is very similar to the previous generation of ROG Strix cards – the shroud is a very stealthy matte-black, while the three fans span the length of the card. The overall RGB implementation is also the same, with the shroud being home to twelve small LED strips which are user-configurable using ASUS Aura.

The fans have been re-designed, however – ASUS calls them ‘Axial-tech Fans’ when the previous generation used the ‘Wing-blade Fans’. These new fans measure 85mm – the same as the wing-blade fans – but you will note the blade design is different, as the new fan blades are more swept in their shape, when the previous fans were much straighter.

On top of that, the ‘axial-tech fans’ also have a ring around the outside of the fan blades, where the previous generation blades were left open. ASUS says this new design allows for up to 27% increased air flow, and 40% greater static pressure. 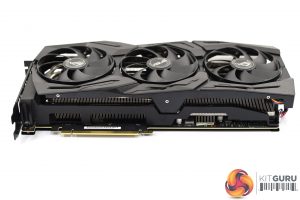 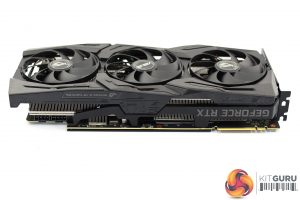 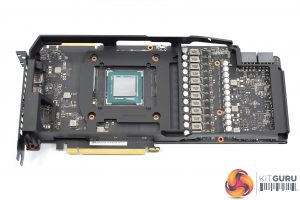 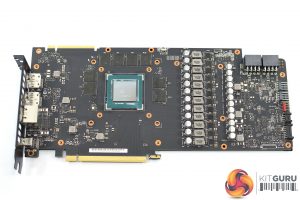 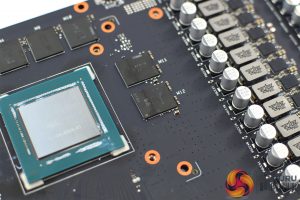 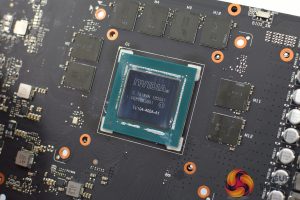 To open the card, only six screws need to be removed. Removing the heatsink is only half the battle, though, as we can see there is a metal frame which is screwed into the backplate. This both provides extra support to the card – making it more rigid and less likely to sag – while it also acts as a heatsink for the VRAM chips. Removing this plate requires several more screws to be removed, including two from the I/O bracket.

Once that is removed, we get a clear look at the PCB. This is a custom job from ASUS with an improved 10+2 Super Alloy Power (SAP) II phase design, while ASUS claims its SAP II capacitors offer over 90,000 hours longer lifespan than traditional capacitors – though that obviously goes well beyond the scope of this review!

The 8GB of GDDR6 memory comes courtesy of Micron, with the chips labelled 8PA77D9WCW. The TU104 GPU is also labelled ‘400A’ – with the A meaning this is a binned chip that Nvidia has allowed partners to sell with a factory overclock.

Another thing worth noting is the BIOS switch at the top of the PCB. This lets users choose between the ‘performance’ BIOS or the ‘quiet’ BIOS – the only change is the fan curve is drastically reduced when using the card with its quiet BIOS. This is something we test later in the review. 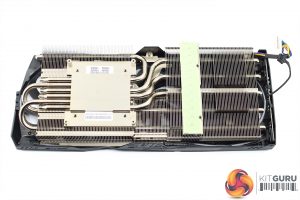 The heatsink itself makes use of 6 nickel-plated heatpipes which draw heat away into a fin array that ASUS says has 20% larger surface area than the previous generation of Strix cards. This helps explain why this Strix RTX 2080 is a 2.7 slot card, when the Strix GTX 1080 Ti was ‘only’ a 2.5 slot card.

The GPU contacts with a nickel-plated copper base, and this uses ASUS’ MaxContact technology which essentially makes the surface a lot flatter than traditional heat spreaders – up to 10 times flatter according to ASUS. This simply ensures increased contact between the GPU die and the plate, thus enabling greater heat transfer. 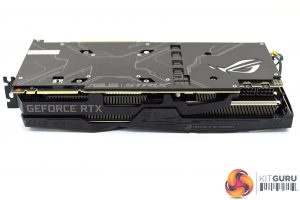 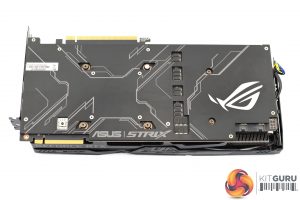 Moving onto the front side of the card, this is home to some subtle GeForce RTX branding, as well as the Republic of Gamers logo on the bottom edge. This is another of the RGB lighting zones.

The brushed metal backplate is very easy on the eye, with some white lines to add a bit of interest. The ROG eye logo on the right-hand side of the card is again illuminated by RGB LEDs.

You will also notice a small button sticking out of the backplate, just above the NVLink connector. This is actually an RGB lighting power button – you can press it to turn the lighting on or off. This will appeal to those who aren’t keen on the RGB trend which has taken over almost every area of the PC building world – though I do wonder how practical this is considering you would presumably have to remove your case’s side panel to push the button. 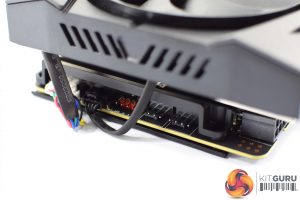 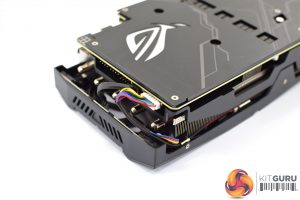 At the end of the card, we find three 4-pin headers. Two are for connecting case fans to the graphics card – this means the fan curve is controlled by the graphics card’s temperature, rather than your CPU temperature which is usually much cooler when playing games. We’ve seen this feature before but it is certainly useful.

The other header (on the far left, with the red plastic frame) is an ASUS Aura RGB header which means you can connect various compatible RGB paraphernalia to the graphics card and control the lighting for both using the Aura software. This makes it easy to add an extra RGB LED strip (or similar) as you don’t need a secondary controller to use it.

Next to these headers we find the small connector for the graphics card’s own fans. I do have to call ASUS out for this, as it is a horrible multi-colour cable that has not been sleeved. It is a minor point, for sure, but when you are paying £999 for a graphics card it is certainly not too much to ask that the cables should be black rubber at the very least. This just looks lazy on ASUS’ part, particularly as the connector is exposed at the end of the card, so you will be able to see it once the card is installed in your case. 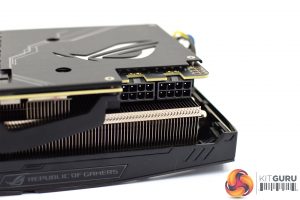 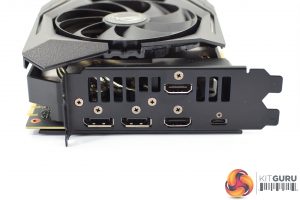 Moving on, the Strix RTX 2080 requires 2x 8-pin PCIe power connectors, up from the 1x 8-pin and 1x 6-pin requirement of the Founders Edition.

Display outputs have also been tweaked, with ASUS providing 2x HDMI 2.0b ports, with 2x DisplayPort 1.4 and the USB-C connectors.