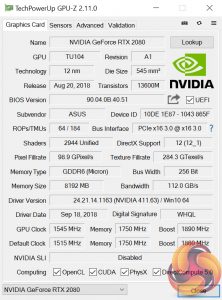 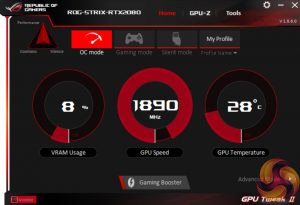 As mentioned, the Strix runs at 1860MHz out of the box, but we tested using the OC mode within GPU Tweak II to raise the boost clock an extra 30MHz.

We did the bulk of our testing using the card’s performance BIOS to get the most from the card. We did re-run some tests using the quiet BIOS – including all of our 4K gaming benchmarks – to see what performance difference it made. Each result for the card is clearly marked depending on what BIOS was used.

It is also worth clarifying that clock speed is not affected by choice of BIOS – so we used both with the 1890MHz OC mode enabled. However, we can expect a significantly quieter fan curve to cause the GPU to run hotter, thus affecting how far GPU Boost 4.0 will take the clock speed. How much of a difference that will make (if any) is what we are testing today.