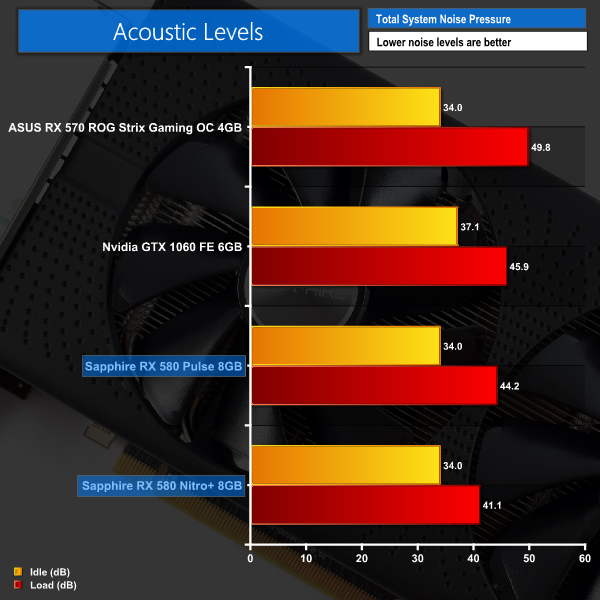 There is no doubt that the Nitro+ is the quieter card. The Pulse isn’t loud – compared to the ASUS RX 570, for instance, it much easier on the ears – but the Nitro+ is simply one the quietest graphics cards I have ever tested.

This is obviously because the fans run slower on the Nitro+ – at an average of 1149RPM during the stress test, where the Pulse fans ran at 1544RPM. However, this is even more impressive when you consider the fact that both cards peaked at 75C. So the Nitro+ is not only running slightly faster, but its fans are also spinning slower – yet it doesn’t get hotter than the Pulse.

This can be explained by the physical attributes of the Nitro+ – it is a larger card, with a bigger heatsink, while two of its heatpipes are also slightly thicker. This means there is just more surface area for the heat to dissipate, meaning it can run both faster and quieter than the Pulse, while maintaining the same core temperature.

Both cards do stop the fans from spinning during light loads, too, so you will have silent operation while browsing the web or emailing. We already mentioned on the previous page that I found the Pulse card does spin for longer before its fans eventually stop completely, but you will be able to enjoy peace and quiet with both cards if you’re not gaming.