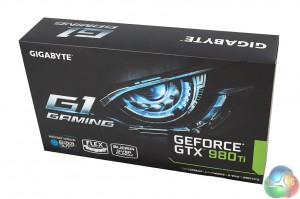 Gigabyte are focusing on their creepy ‘eye’ logo along with the ‘G1 Gaming’ branding on the front of the box. 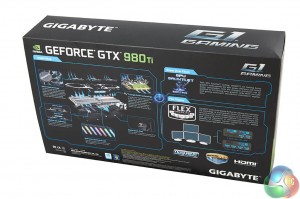 The rear of the box lists some technical details, with much focus placed on the cooler. We will look at it in more detail shortly. Our review sample shipped directly from Taipei so we didn’t receive any retail accessories in the box. 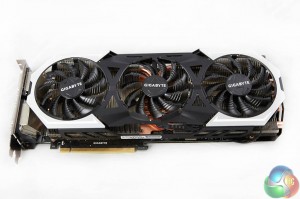 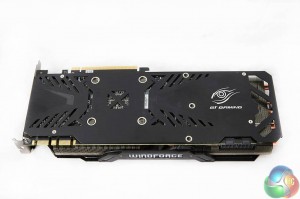 The Gigabyte GTX980 G1 Gaming is an attractive looking dual slot card, weighty in the hand due to the metal construction and backplate. We were disappointed when the reference GTX980 Ti didn’t ship with a backplate, so it is good to see Nvidia partners taking build quality a stage further.

The triple fans span the full length of the PCB. Gigabyte claim the fans produce 23% ‘more’ airflow than a standard design and that the heatsink on the card is using a ‘special fin architecture’. 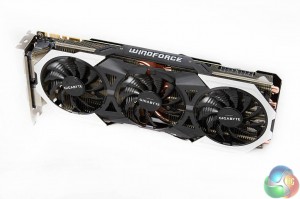 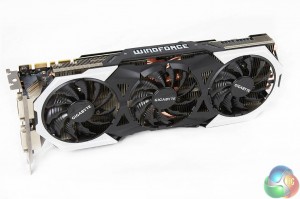 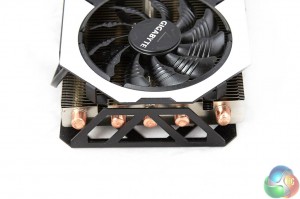 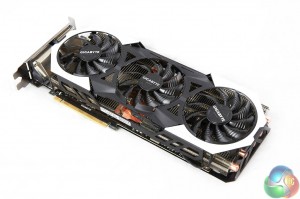 We think this card is a looker, Gigabyte have aimed for a simple colour ethic – by removing it all. It is just black and white. We can see the end of five thick heatpipes on one side of the card. More detail on this when we take the card apart shortly.

The ‘WINDFORCE’ branding on the side of the cooler lights up when the card is in operation. The end user can change the colour of this backlighting via the Gigabyte OC GURU II software. This will be popular for those who like to colour coordinate system components. A total of 7 colours are offered. 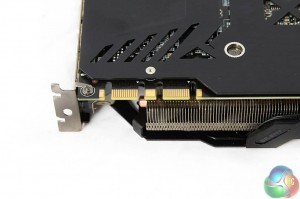 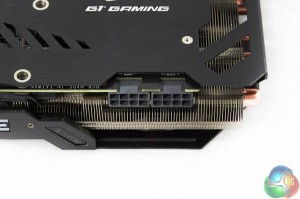 The GTX980Ti is SLi capable in 2, 3 and 4 way configurations. The Gigabyte GTX980 Ti G1 Gaming takes power from two 8 pin connectors. The reference design and all other GTX980Ti’s we have tested so far use a single 6 pin and 8 pin power connector, so this Gigabyte version is able to draw more power from the 12V rail. 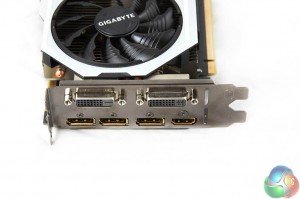 Unlike all the other GTX980 Ti’s tested so far, the Gigabyte G1 Gaming ships with dual DVI ports (1x DVI-I and 1x DVI-D). Also there is a single HDMI 2.0 port (with HD audio and Blu-Ray 3D movie support), and three DisplayPorts. The move to predominately Displayport connectivity is inevitable and welcomed. If you wish, you can use all these ports at the same time for triple monitor gaming. 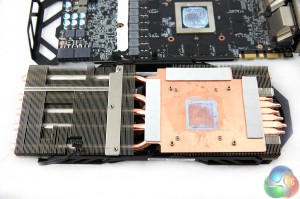 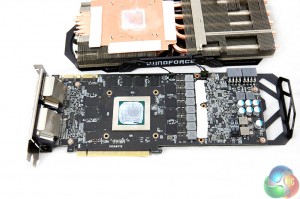 The cooler is very substantial indeed. There are a total of 6 copper pipes that run into the base. Five of them (8mm) run parallel to the PCB, and one (6mm) bends around to run in the opposite direction, into a smaller, separate aluminum heatsink. The copper heatsink also directly cools the GDDR5 memory chips on the PCB. 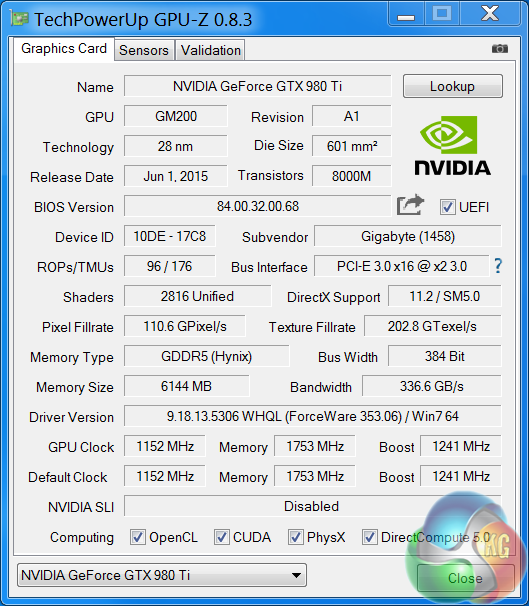 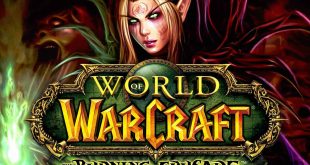 Blizzard survey hints at The Burning Crusade for WoW Classic

Since the release of WoW Classic, there has been talk of Blizzard also adding support …