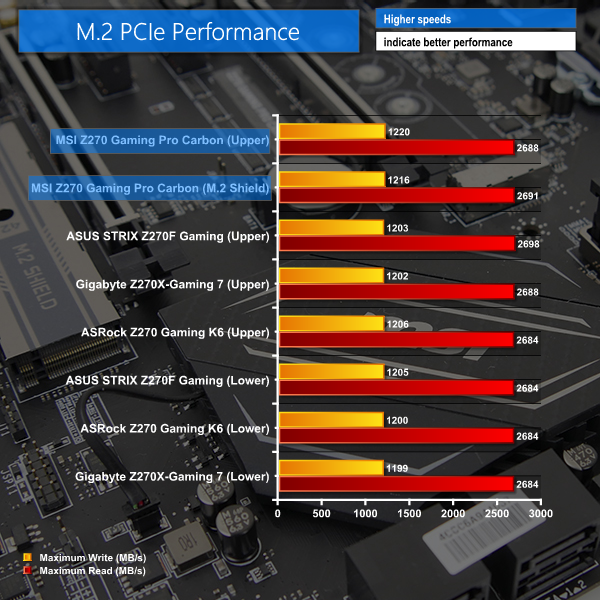 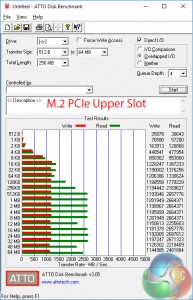 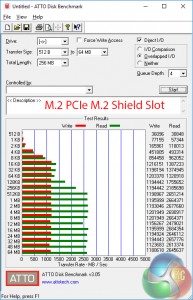 Worth pointing out is that MSI’s X BOOST software had no benefit on M.2 SSD transfer rates.

PCIe NVMe performance from both of the MSI Z270 Gaming Pro Carbon’s M.2 slots is without bottlenecks. The upper slot can show tendencies for thermal throttling on the SSD. A heavy, sustained write operation will likely force a hot SSD such as the Samsung 950 Pro to thermal throttle and lose performance. 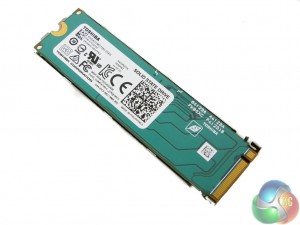 And that’s where MSI’s M.2 Shield trump card comes into play. Mounting the M.2 SSD against a thermal pad connected to a metal heatsink works well for minimising thermal throttling issues. It has a secondary benefit of hiding the ugly green PCB of certain M.2 SSDs. 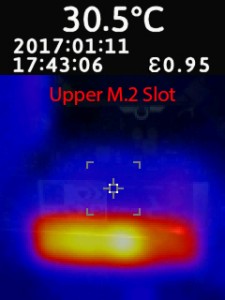 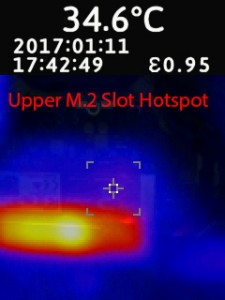 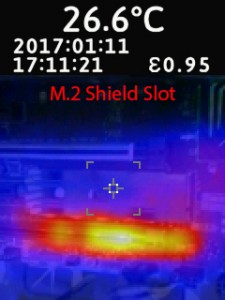 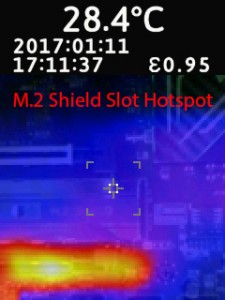 Thermal imaging shows the M.2 SSD hotspot operating at a higher temperature when not installed in M.2 Shield. The thermal pad and metal bracket from M.2 Shield help to spread heat across a larger surface area thus reducing the localised operating temperature and helping to reduce the risk of thermal throttling occurring. 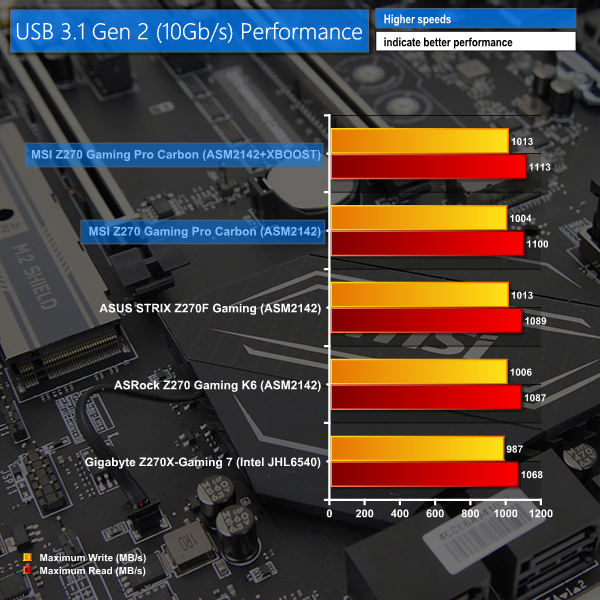 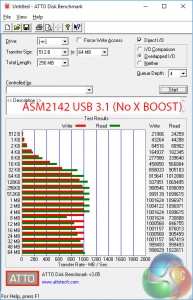 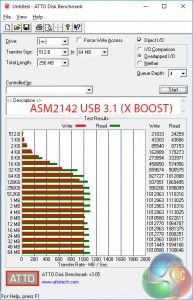 USB 3.1 Gen 2 performance is strong thanks to the use of ASMedia’s new ASM2142 chipset. X BOOST software does little to improve transfer rates on our test equipment though it does help to improve the consistency of the sequential speeds, as show by the ATTO charts. This is using the Windows 10 OS. 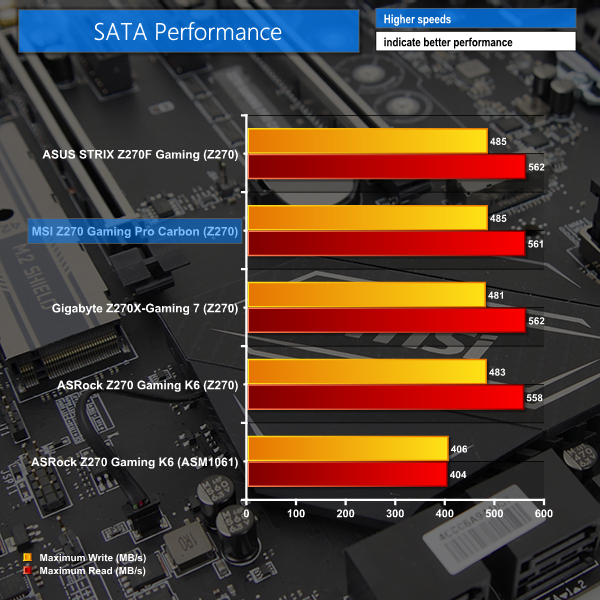 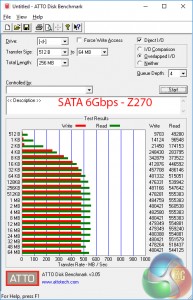 SATA performance is as expected. No speed bump from X BOOST here. 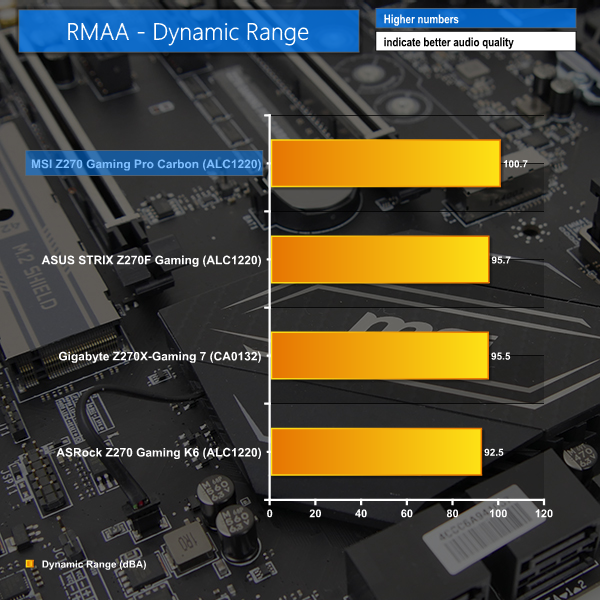 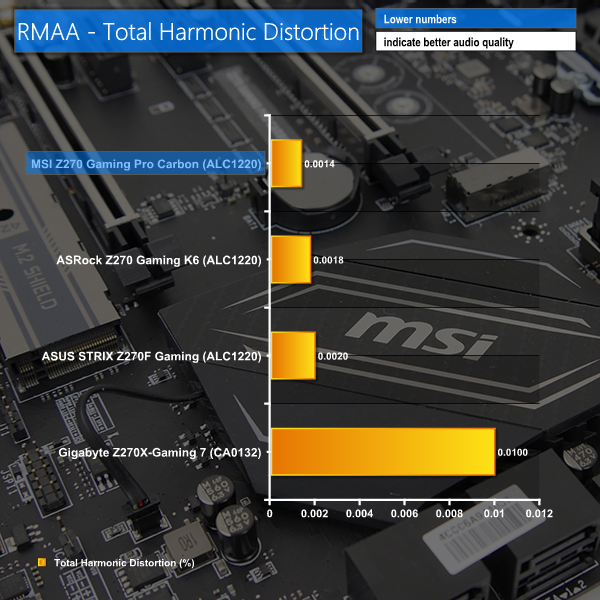 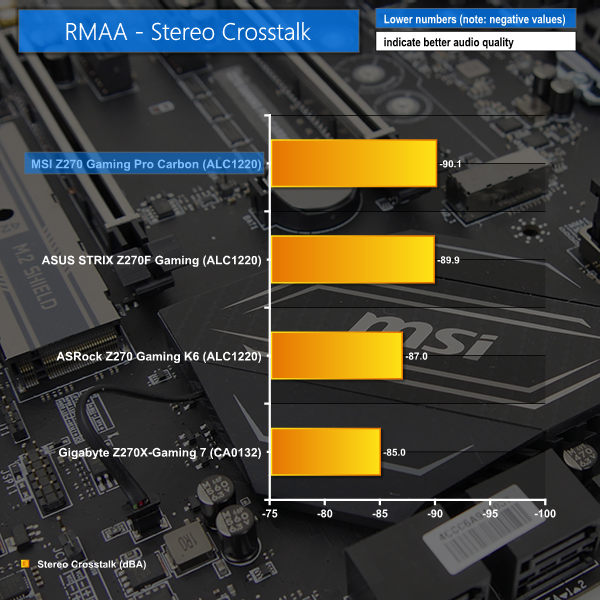 Overall performance from MSI’s Audio Boost 4 system is very strong indeed. Shielding of the codec and distinct PCB tracks seem to have done a good job at minimising signal interference, as shown by the test results.