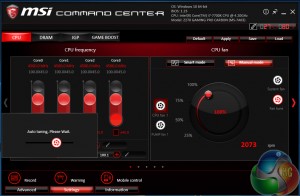 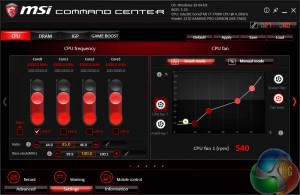 Gaming App is used to control a number of different operating modes for the system. Three pre-set modes are available – Gaming, OC, and Silent. The OC mode applies Game Boost, as it is called in the UEFI.

Macros can be set in a dedicated section for both the keyboard and mouse. There’s also an OSD to display system information though it is far less in-depth than RivaTuner that is supplied with MSI Afterburner. A monitor’s colour profile can be adjusted to reduce eye-strain or blue light. There’s also an option for remote control of the system settings.

The RGB section of MSI’s Gaming App is where most users are likely to be spending their time. Individual control is given to all four different lighting sections of the motherboard, the 4-pin RGB header, and the motherboard function LEDs (albeit in limited capacity).

There is also an option to completely switch off all LED lighting.

MSI’s lighting options in the OS software are good. They aren’t quite as good as Gigabyte’s and ASUS’ alternatives which offer intelligent operation modes for the LED colours to react to system behaviour such as temperatures. MSI’s interface is, however, an improvement over ASRock’s offering that we saw on the Fatal1ty Z270 Gaming K6.

Gaming LAN Manager is essentially MSI’s in-house software that allows the vendor to use an Intel NIC while also retaining some of the control features typically associated with Killer-based offerings. The main benefit is enhanced information delivery so that a user can understand how their system’s network-interacting software is behaving. There’s also an ability to prioritise applications such as games.

The tool also includes options to restore the RAM disk upon boot, back it up to a non-volatile storage device, and set advanced cache for certain options.

X-Boost features a number of system operation modes that use tweaked settings. There are presets for operations such as gaming and video editing and the option for a user to create their own setting is present. The game mode sets all performance metrics to a high importance while the video editing mode emphasises parameters important to such a task.

There is also the ability to speed up USB and storage devices. We tested X-Boost and found it to offer little benefit to storage devices other than those based on USB 3.1. Using our USB 3.1 Gen 2 test device with RAID 0 SSDs, X-Boost helped to deliver more consistent transfer rates in our ATTO test.

DPC Latency Tuner allows system settings to be tweaked in order to optimise DPC latency. This tool could be useful for those with audio editing tasks. Go2BIOS is a quick and easy way of entering the BIOS, without missing the option due to such fast system POST using newer Windows versions.

Smart Tool can be used to create a bootable USB for Windows 7 installation. As a side note, there’s a reference to the AMD AM4 platform in one section of MSI’s Smart Tool app.

Live Update 6 is a tool that can update utility apps and drivers. I do not like the presence of unrequested software installations such as Norton and Google toolbar.

Nahimic audio software gives a user control over the operation of the board’s audio system. Presets relating to gaming and multimedia content consumption can be set. There is also control for the microphone and interaction of the audio system with XSplit Gamecaster. Sound Tracker is a visual tool that can display the direction of sound sources during gaming. This is similar to Sonic Radar on competing solutions.

It would be a significant understatement to say that MSI includes a good number of in-depth software tools. The separate software pages are vast and options are plentiful. I particularly like X-Boost and also the extremely in-depth Command Center.

MSI’s RGB lighting control tool is good but it could be better given that ASUS and Gigabyte offer intelligent operation modes that can adjust colour based on temperatures, for example. I would have also liked to see a software manager app like App Center by Gigabyte and AI Suite by ASUS. A lot of software means a lot of shortcuts or location to manage – one umbrella utility would aid ease of navigation to different software offerings.