The most defining feature of any PC built by a system integrator such as Overclockers UK is its choice of case, or more precisely your choice of case. By default, the Germanium comes built inside the Phanteks Enthoo Evolv Tempered Glass Edition but you can pick any of dozens of alternatives.

Of all the cases on offer, though, this one would probably be the one we’d go for. Its two tempered glass sides and thick aluminium exterior panels combined with a really clean, simple design make for a seriously stylish case. Plus, if the all black model isn’t to your liking, there’s always the silver or gun metal versions.

One potential downside of this case is the fact it has that second glass panel on the back, which means if you’re building your own system you have to take care to do a proper cable-tidying job in order for the system to look good from that side. 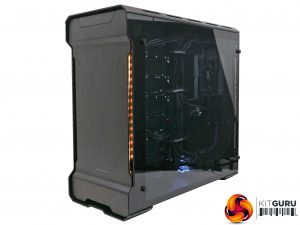 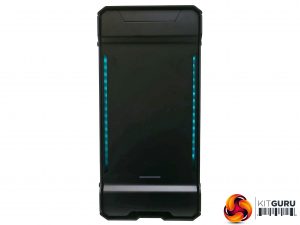 By buying a pre-built system, though, this has been taken care of. You’re still left with a relatively stark look that could perhaps have been improved with the addition of smoked glass, but largely it’s a neat build.

Intriguingly, Overclockers has used a PSU that has white lights that illuminate the bottom section of the case. You’d expect this to just highlight all the mess of cables tucked in that space, and sure enough it does, but because the light is so directional it actually creates quite a cool effect. Plus, the PSU lighting can be turned off independently via a switch on its rear, leaving it to just be a useful way of seeing where to plug your cables when needed.

Elsewhere, Overclockers has added two strips of RGB LEDs to the gaps that run down the front of the case, adding a nice bit of colour to proceedings. The power button on top of the machine also has a RGB light surrounding it, while the motherboard, graphics card and RAM all sport RGB lighting as well.

What really sets the whole thing off, though, is that all the colours are synced up with Asus’ Aura lighting software. You can choose from any static colour you like, leave it on the default colour cycle mode or choose from many other options. 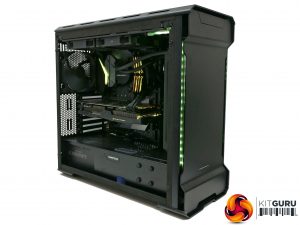 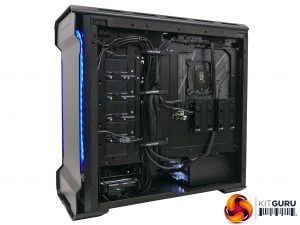 As for the rest of the build, it’s nice and tidy. There’s no custom cabling or anything quite so fancy but all the standard cabling has been nicely routed, tied down or tucked away.

The system employs an Overclockers-branded 240mm all-in-one liquid cooler, with the radiator mounted on the front, behind two 120mm intake fans. At the rear there’s another 140mm fan and the top houses a further two 140mm fans, all of which are exhausting hot air.

Like most modern cases the PSU is housed in a separate, closed-off shroud, along with the hard drive rack. 2.5in SSDs can be mounted on the rear of the motherboard tray. 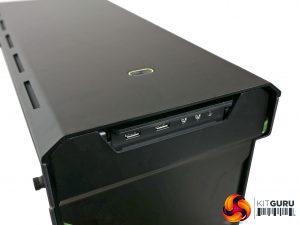 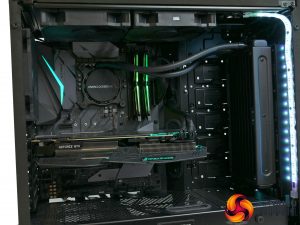 At the front of the case there’s a flip up panel behind which is a couple of USB ports, a headphone jack, microphone jack and the hard drive activity indicator.