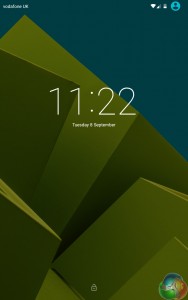 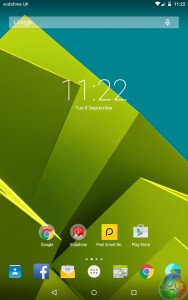 Android has always come essentially untouched on other Vodafone devices, and the same can be said here. I last reviewed the Smart first 6 which ships with KitKat 4.4. The Tab prime 6, however, comes with Lollipop 5.0 as standard, which is an OS I get on well with.

The home and lock screens are very standard Lollipop, with bright colours and sleek visuals. The launcher has been left as stock, with just a few Vodafone widgets here and there – including ‘Discover,’ which lets you monitor data usage as well as other things. 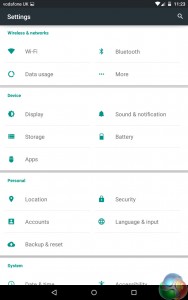 One very nifty feature of the Tab prime 6 is the so-called ‘Palm and Tap.’ As far as I am aware, this is an original Vodafone feature and it is very useful. What this is a way of locking and unlock the tablet in an unconventional manner.

The ‘Palm’ refers to the ability to place your palm on the tablet’s display – and the device will lock. The ‘Tap’ refers to double-tapping the display – while locked – and it will unlock, similar to LG’s KnockOn feature. I found myself using this a lot, and it is certainly a welcome addition to Lollipop. 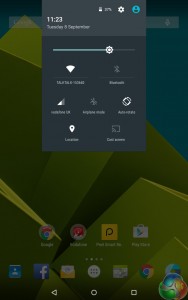 Moving on to other areas, the settings menu is also stock Lollipop, with its green and white theme very recognisable. Previously I have criticised Vodafone for not including tabs for different settings, as this means users do not have to scroll to every setting they want to access. Due to the large display, however, this is not a problem as almost every sitting fits on-screen without any scrolling.

I have also previously criticised Vodafone’s bloatware included with their devices. You will be glad to know it is less of a problem here, with just the two Vodafone apps – the aforementioned ‘Discover’ and an ‘Updates’ app. While the latter is redundant as software updates can be found through the device settings, Discover is handy if just for allowing users to manage their data usage. 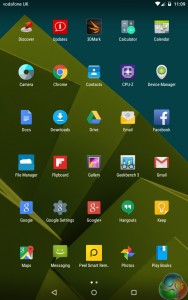 So again – stock Lollipop, and nothing too flashy. Despite this, the ‘Palm and Tap’ feature is innovative and I found it very useful. A lack of bloatware is also nice to see, so on the whole the included software is pretty much perfect in my view.