The Zenbook’s key component is an Intel Core i7-8550U. It’s a part from the blue team’s refreshed Kaby Lake range, which doubles the core count for these low-power i7 chips – and improves cache and boost levels – while retaining the same 15W TDP rating as its predecessor.

Intel has done this by making smaller tweaks to the existing architecture – despite the 8-series branding on these chips, they don’t use the newer Coffee Lake technology.

The i7-8550U is a quad-core chip with Hyper-Threading, which means it can address eight concurrent processing threads. It’s a low-power chip, which means a modest stock speed of 1.8GHz and a tiny TDP of just 15W – but Intel’s chip-tweaking efforts give this CPU a huge Turbo speed of 3.7GHz on three or four cores and 4.1GHz on one or two cores. 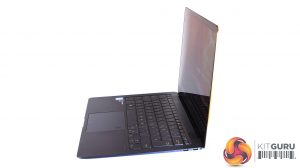 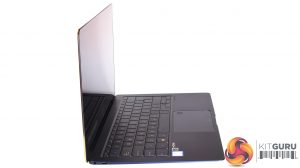 The chip is paired with 16GB of memory. It’s LPDDR3, which consumes hardly any power – but its older DDR3 standard means it runs at just 2,133MHz.

There’s no room for a dedicated graphics chip in this machine, either, which means relying on Intel’s integrated graphics. The UHD Graphics 620 silicon inside the i7-8550U runs at a peak speed of 1,150MHz, and has no problem handling media playback and basic graphical tasks, like photo work. However, it’s no good for gaming or tougher work applications like video editing.

Still, this specification should outpace at least some of its rivals. The HP Envy x360 has one of last year’s Core i7 chips and less memory alongside a weak Nvidia graphics core. The Razer Blade Stealth also uses an older Core i7 processor, and it has no discrete GPU – to get that, you’d need to use the Core graphics dock.

Storage comes from a Samsung PM961, which is an NVMe SSD that appears in a lot of laptops and PCs. It’s a solid bit of kit, and its capacity of 512GB ensures that the Zenbook has ample space for applications – but it won’t be able to keep up with Samsung’s newer consumer drives.

Asus is also claiming up to 12 hours of battery life for its updated Zenbook. The improved Kaby Lake processor should help deliver better longevity than previous models, even if the 46Wh power pack isn’t particularly large. Impressively, the laptop can charge more than 50% of its battery in under an hour.