We leave the system to idle on the Windows 10 desktop for 10 minutes before taking a power draw reading (and averaging the result, if necessary due to Ryzen’s sensor drift). For CPU load results, we read the power draw while producing approximately 5 minutes ‘worth of runs of the Cinebench R20 multi-threaded test. We also run 10 minutes of AIDA64 stress test. 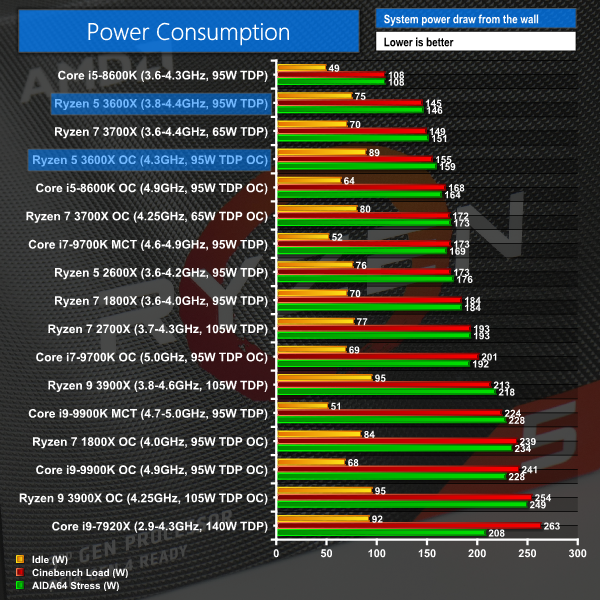 Zen 2 has proven to be an energy efficient architecture but that showing only holds true up to a certain frequency range. It would be fair to assume that silicon which sits less preferentially on the temperature-frequency or voltage-frequency curves is set aside for Ryzen 5, while the higher-quality silicon makes its way to Ryzen 7, Ryzen 9, or even EPYC.

Pushing hard on the frequency, Ryzen 5 3600X draws around 145W from the wall under Cinebench multi-thread load. This places its power usage around the same level as that of the eight-core, sixteen-thread Ryzen 7 3700X due to the Ryzen 5 chip’s higher operating frequency (and perhaps lower quality CCD).

Intel’s Coffee Lake Core i5 that operates at 4.1GHz for an all-core load draws 37W – or 26% – less power from the wall in the Cinebench run. Its performance level is also significantly lower, however.

With the Coffee Lake i5 and Ryzen 5 3600X both overclocked, power draw from the wall is similar. This is despite the far superior performance for AMD’s part.

It looks as though operating frequency has been prioritised for Ryzen 5 3600X, with power efficiency coming in as a secondary concern. That’s likely to prove advantageous for users in this market segment who are likely less concerned about power draw than prosumers looking for workstation-level CPUs. 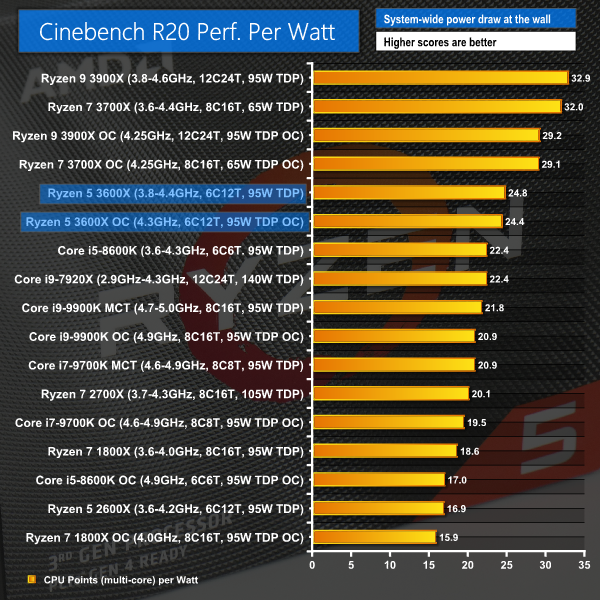 Performance per Watt, the Ryzen 5 3600X is strong but not outstanding compared to its Zen 2 brothers. A stock-clocked score of 24.8 is strong, beating the well-performing 4.1GHz all-core Coffee Lake i5 by 11%. The other Intel Coffee Lake competitors are beaten more convincingly by the Zen 2 3600X’s efficiency.

Ryzen 7 3700X steals the show here, proving that a greater number of threads, even with reduced operating frequency, are an ideal match for multi-core rendering tasks.

Temperature recordings were taken using a 240mm Corsair H100X all-in-one liquid cooler with its two fans running at their 1700 RPM maximum. Ambient temperatures were around 25-28°C in the hot UK summer weather (and normalised to 25°C where there were fluctuations). 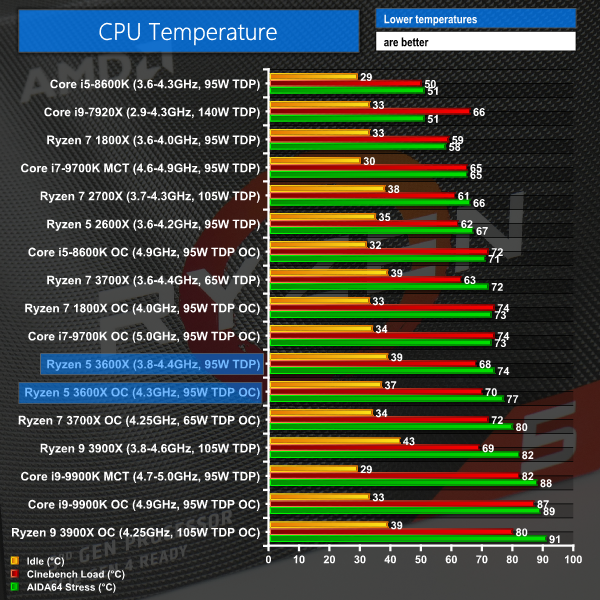 Operating temperatures are where the power used by a consumer CPU become more interesting. That thermal energy must be dissipated by a CPU cooler that is likely smaller and cheaper than what workstation users and prosumers will invest in.

Using our Corsair H100X 240mm AIO with its fans operating at 1700 RPM, the Ryzen 5 3600X stayed below 75°C at its stock operating speeds. By comparison, the 4.1GHz Coffee Lake i5 ran just above 50°C for the same stress test. In the real world, this likely translates into less CPU cooler noise as the fans could deal with the Core i5 even when running at lower speeds.

Overclocking changes the picture considerably. The Coffee Lake i5 starts to put a decent amount of stress on the CPU cooler when running at 4.9GHz and 1.35V. AMD’s Ryzen 5 3600X runs hotter when pushed to 4.3GHz with 1.35V. This is the point where we would not feel comfortable using the included Wraith Spire CPU cooler for adequate cooling, especially if your ambient temperatures climb high in the summer months.

The point to take from this result is that Ryzen 3000 CPUs should not be associated with low operating temperatures simply because of the 7nm FinFET process technology they’re built on. Unlike the situation with Intel’s Turbo Boost on the Coffee Lake Core i5, Precision Boost 2 will opportunistically grab extra frequency when there is thermal headroom available, so don’t expect to see low running temperatures unless you have exceptional CPU cooling or motherboard power delivery limitations.

I’d also like to make the point that the £50 that can be saved by buying the (what we believe to be) practically identical Ryzen 5 3600 non-X CPU can be invested wisely in a strong CPU cooler such as an entry-level 240mm AIO or a single-tower 120mm air cooler.