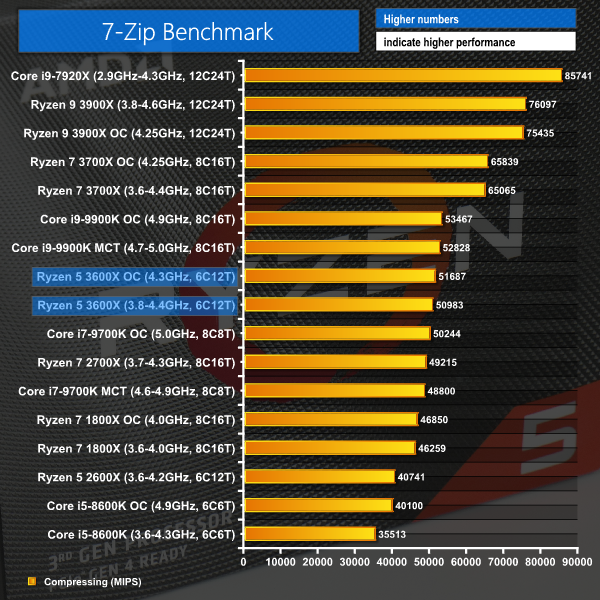 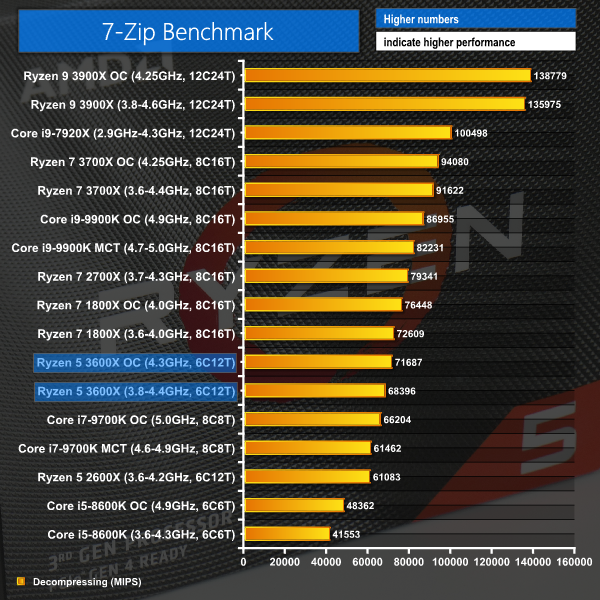 7-Zip’s compression result sees the Coffee Lake Core i5 pinned to the bottom of our performance chart, while its Ryzen 3000 competitor sits around the middle of the pack. The performance difference is significant, with AMD’s offering proving 29% better when both chips are overclocked.

Decompression results swing the favour even more towards AMD and its Zen 2 architecture. This time, the Ryzen 5 3600X performance lead versus the Coffee Lake Core i5 is 48% with both chips overclocked. AMD’s six-core, twelve-thread Zen 2 part still manages to hang close to the Ryzen 7 1800X, Ryzen 7 2700X, and Intel Core i7-9700K in terms of performance. The two Zen-based eight-cores are a little faster while the Coffee Lake i7 is a little slower, even when overclocked. Real performance gains can be had by jumping up to the Ryzen 7 3700X, but that comes at a cost of around £90. 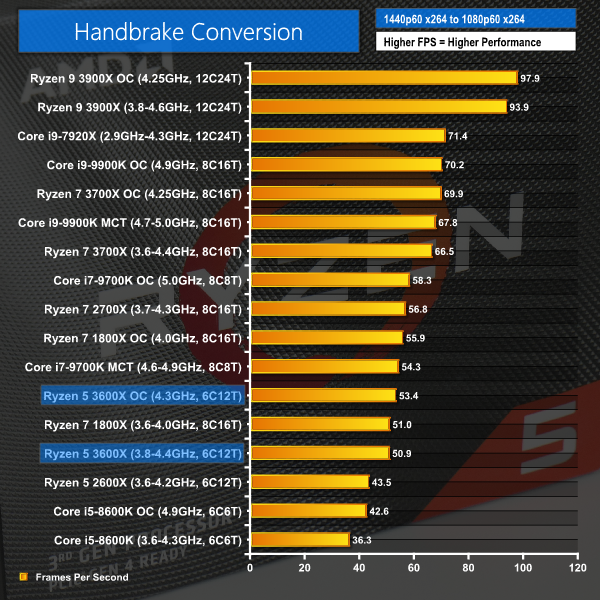 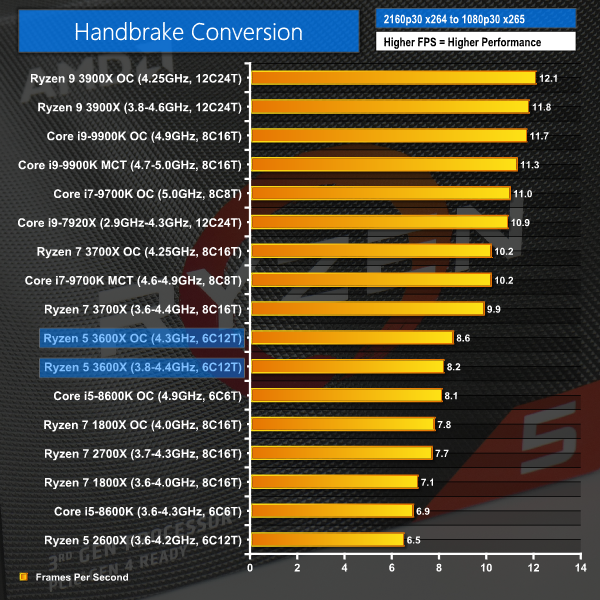 The performance trends that we saw in Cinebench multi-threaded testing carry on through to Handbrake. With our 1440p60 x264 to 1080p60 x264 workload, AMD’s Ryzen 5 3600X positions itself a performance tier above the Coffee Lake Core i5, thanks in large to the AMD chip’s extra half-a-dozen cores through Simultaneous Multi-Threading. The stock 3600X scores just under 51 FPS on average, making it 19.5% faster than the 4.9GHz Coffee Lake Core i5.

A clock frequency advantage and more physical cores help the Core i7-9700K outperform Ryzen 5 3600X by 7% stock versus stock. That margin widens when the frequency headroom of Intel’s Coffee Lake CPU is leveraged.

An interesting observation is that the six-core, twelve-thread Ryzen 5 3600X’s performance is close to 75% of that of the eight-core, sixteen-thread Ryzen 7 3700X. That implies rather efficient scaling between the two chips in our Handbrake x264 test. Jumping up to the twelve-core, 24-thread Ryzen 9 3900X doesn’t quite deliver double the Handbrake FPS value, but it isn’t too far away.

Switching focus to our x265 Handbrake conversion test, we see Intel’s robust AVX implementation in Coffee Lake significantly close the gap to Zen-based CPUs across the board. The Coffee Lake Core i5 is no exception here, with the overclocked six-core, six-thread processor roughly matching the Ryzen 5 3600X and its dozen Zen 2 threads, albeit with significantly higher frequency on the Intel part.

While the blend of Intel’s Coffee Lake architecture and 14nm++ speed advantages certainly prove successful in our Handbrake x265 test, the AVX-based performance uplift offered by Zen 2 should not be overlooked. AMD’s £240 Ryzen 5 3600X outperforms both the Zen and Zen+ flagships that predate it, despite both of those processors featuring two additional cores and four more threads. In the case of the Zen+ Ryzen 7 2700X, the Zen 2 3600X’s clock speed boost isn’t all that excessive either, which again proves the performance boost for certain creative workloads brought by Zen 2’s architectural tweaks.