We run the built-in benchmark using a 1080P resolution and the Ultra quality preset. 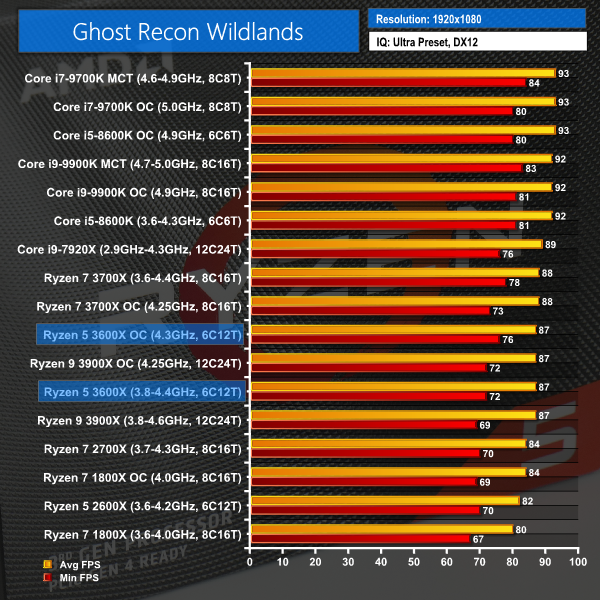 Ghost Recon Wildlands places significant load on the GPU with its Ultra preset and therefore keeps all processors below 100 FPS on average. The Ryzen 5 3600X posts numbers that are comparable to other Ryzen 3000 parts, proving that you don’t really need to upgrade to the eight- or twelve-core parts for solid gaming performance.

Intel’s Coffee Lake Core i5 is a handful of FPS faster on average and its reported minimum FPS numbers are also perfectly fine. Our logs show 45% average CPU usage for the overclocked Coffee Lake i5 throughout the benchmark runs. The 4.3GHz Ryzen 5 3600X, meanwhile, averaged 35% CPU usage. Even with game-related background task thrown into the mix, that’s probably not a big enough difference to swing your decision one way or another.

We run the built-in benchmark using the Mumbai scene with image quality set to Ultra and the DirectX 12 mode enabled. 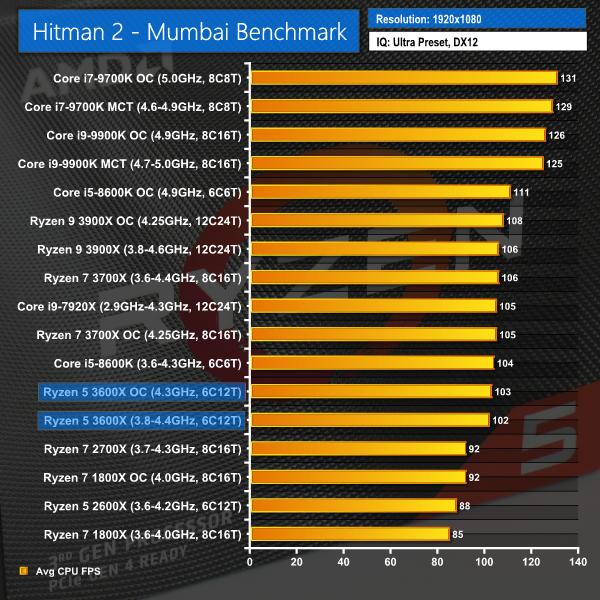 The speed bump brought about by overclocking the Coffee Lake i5 to 4.9GHz pays dividend in Hitman 2. The outcome from this clock speed adjustment is that the overclocked six-thread Intel chip outperforms the Ryzen 5 3600X by around 8%.

Compared to the other Zen 2 parts, Ryzen 5 3600X holds its own and shows that you don’t really need to push up to the more expensive, higher-core count parts if you’re only interested in gaming. And versus Zen and Zen+ predecessors, the Ryzen 5 3600X is notably faster on average.

Minimum FPS values in this title’s DX12 mode are all over the place, so we see no value in comparing them as the consistency even between consecutive runs in non-existent.

CPU usage was around 50-70% for the overclocked Ryzen 5 3600X in this DX12 title, and the load was balanced fairly well across threads. The 4.9GHz six-thread Core i5 operated at 80-95% usage in the benchmark run, with all six threads taking a well-balanced amount of loading. Any background processes are likely to hit the Core i5 harder, given the proximity to maximum CPU usage when running Hitman 2 in DX12 mode.

We run the built-in benchmark using the DirectX 12 mode, anti-aliasing disabled, and the Highest quality preset. 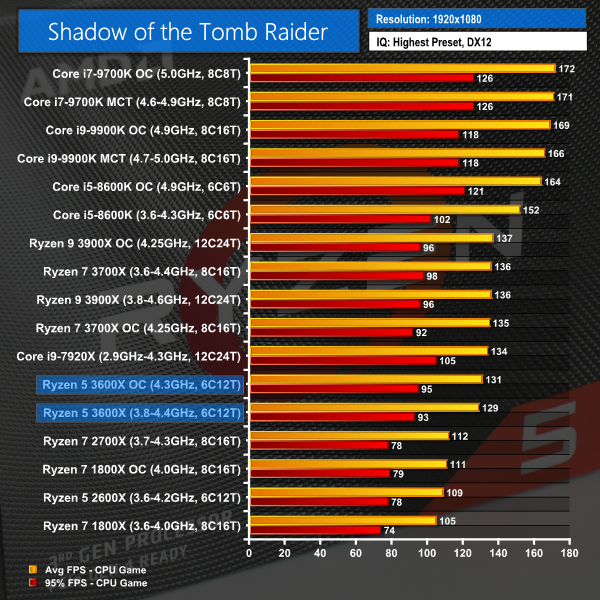 Shadow of the Tomb Raider shows more of the same, with the Coffee Lake Core i5 outpacing the Ryzen 5 3600X on average. Both CPUs show excellent performance in this title, but the Intel part is undeniably faster in terms of average FPS, provided you have a graphics card powerful enough to highlight the difference.

The performance uplift for the Zen 2 Ryzen 5 CPU is noticeable over the Zen and Zen+ parts. With that said, unless you demand 95 FPS or higher in this DX12 title, all processors on show do a solid job.

The six-thread Coffee Lake Core i5 was pinned close to 100% CPU usage in this benchmark run while the twelve-thread Ryzen 5 was running around 70-90% CPU load. As we have said previously, any background tasks that require CPU cycles are likely to hit the performance of the Core i5 harder than the Ryzen 5.